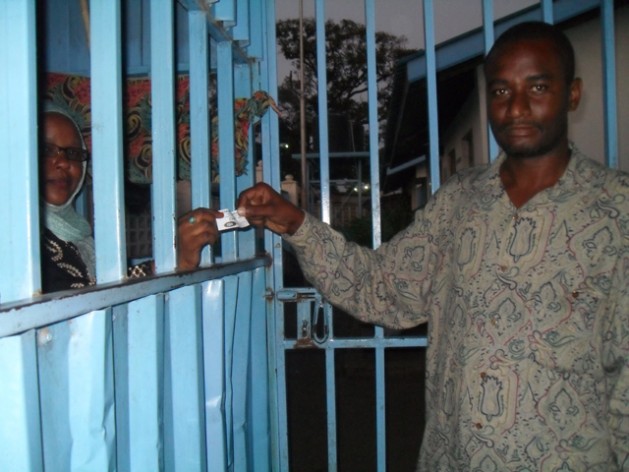 Mohammed Omar buying a ticket to use the toilets at Kongowea market where one toilet block serves at least 1,500 people a day. Credit: Miriam Gathigah/IPS

Nairobi, Nov 6 2015 (IPS) - Though the Kenyan government has demonstrated a commitment to lift its youth out of poverty, particularly those in the informal settlements, projects designed for youth continue to be crippled by rampant corruption.

One of these projects was under the National Youth Service and is currently entangled in a scam that has left the service unable to account for an estimated 7.8 million dollars, making it difficult for the service to meet its financial commitments to the youths.

“The project involved youths in the slums where we would basically manage waste by collecting solid waste, unblocking drainage systems and also clearing the feeder roads within the slum,” said Calvin Otieno, a resident of Kibera slums, one of the largest in Africa.

This project had been rolled out in 63 of the country’s 290 constituencies, making Otieno just one of the 70,000 youths benefitting from the programme.

Plans were also underway to roll out in more constituencies towards creating at least 20,000 opportunities for youths every year.

With World Bank statistics showing that more than four in every 10 Kenyans live below a dollar a day, “the four dollars the youths received daily for five days in a week was significant income,” Nairobi based policy and economic analyst Ted Ndebu told IPS.

To help them improve their financial profile, the youths would save a mandatory one dollar every day into an account set up by the National Youth Service.

Yet this may all have come to naught following allegations of massive misappropriation of funds.

Hamisa Zaja, Regional Programme Officer of Maji na Ufanisi –a local non-governmental organization which addresses water, sanitation and hygiene issues – told IPS that this model could take the shape of a youth project that has been panning out at the Kongowea Market in Mombasa County in the coastal region for about a year now.

She says that the country’s market sector, one of the most vibrant in the informal economy, continues to face many challenges which need to be turned into income generating opportunities for the youths.

All the major markets are fitted with toilet blocks which, in most cases, also have bathrooms, “but most of these facilities have fallen into a bad state because they are not cleaned often and thoroughly presenting a serious health hazard to thousands of market users,” Zaja explained.

“At times the situation leads to the indefinite closure of markets which affects, directly and indirectly, millions of Kenyans who depend on the market as a source of livelihood and for food,” she said.

This was the situation at Kongowea market last year, a situation that inspired Zaja to approach the Mombasa County governor Hassan Joho with a proposal.

“So many youths across the country remain unemployed, our county is also notorious for drug and substance abuse and more recently, religious extremism and the consequent radicalization of our youths,” she said.

“What if we had a project where these youths could be engaged by take up cleaning services at the market place, collect the user fee and use it to pay themselves at the end of the month?” Zaja posed to the governor since markets and the facilities therein are a public resource.

On 2 September 2014, a Memorandum of Understanding was signed amongst the Maji na Ufanisi (Hamisa Zaja), the Mombasa County government, Market Stakeholders who are also the market users and the youths who would work as cleaners, cashiers and managers.

The initiative was given the name Kongowea Market, Water and Sanitation Project. Zaja recruited and trained the initial 33 youths all from the Kongowea community.

“We were supported by the County government as well as the Swedish embassy in order to buy cleaning equipment and detergents before the project could become self-sustaining,” she said.

Once the toilets and bathrooms were clean and ready for use, visitors would pay a small fee to use them. In the first month of the project, 6,000 dollars were collected.

The second month raised about 8,000 dollars. The project is currently raising at least 16,600 dollars per month.

According to Adnaan Dino, a beneficiary and cleaner, “about 1,500 people use each of the six blocks so we are usually very busy. Although the market opens at 3am, we open at 5am and close at 6pm.”

Dino is also one of the project’s many success stories for making a comeback from a life of crime. Some of his colleagues are ex-convicts, as well, but through the project, which is also a rehabilitation centre, they are able to function as productive members of the society.

Mohammed Omar, another beneficiary and clerk, says that the number of employed youths has also risen to at least 90.

“This means that we are able to work in shifts and many of the youths have gone back to school. The project offers full scholarships to several youths in colleges and university,” he says.

Zaja says that there are about ten youths who are attending evening classes at the University.

“We are also paying school fees for 34 Form One students who are living with disability as a way of giving back to our community,” she says.

Omar says that even more employment opportunities are on the way. “An additional new block is nearly done, it will be bigger than the rest with 20 toilets and 20 bathrooms,” he said.

There will also be a boardroom for hire at five dollars per hour as opposed to the 15 dollars paid by market users to hold their meetings outside the market.

Zaja also says that the youths are working to have waste management placed under their docket. Kongowea market has 42 sections and the youths employed will work in shifts collecting at least 300 dollars daily for this service.

The project is not only been hailed locally as a workable model with other regions visiting it for benchmarking, but regionally too, having won the 2015 Africa Sanitation Youth Award where all the 54 African countries competed, beating more than 1,000 competitors.