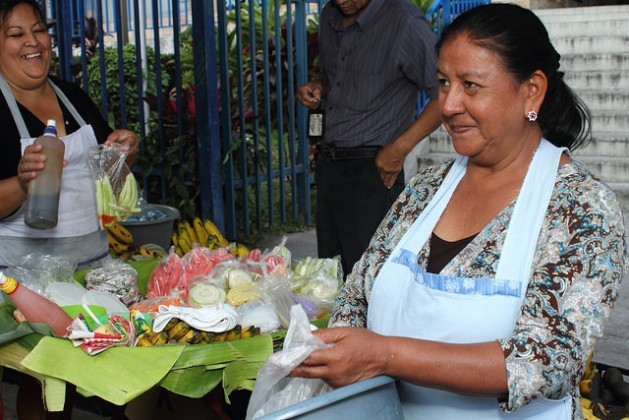 María Elena Rodríguez, 54, makes a living selling fruit at a street stand in San Salvador. She forms part of El Salvador’s informal economy, where workers are not covered by the pension system and women are a majority. Credit: Edgardo Ayala/IPS

SAN SALVADOR, Feb 17 2016 (IPS) - El Salvador is debating reforms of the country’s privatised pension system, which could introduce changes so that it will no longer discriminate against women.

“The pension system has a male-centred, patriarchal focus that fails to take into account the specific differences that women face in the world,” said Marta Zaldaña, secretary general of the Federation of Independent Associations and Unions of El Salvador (FEASIES).

The head of FEASIES, which groups more than 20 trade unions, told IPS that one example of the sexist treatment received by women is the 115,000 domestic workers who are completely outside the system, with no right to a pension or even the minimum wage, or any other kind of protection or regulation.

People working in the informal sector of the economy, 65 percent of whom are women, do not pay into the system and will have no right to a retirement pension, economist Julia Evelin Martínez, a researcher at the José Simeón Cañas Central American University School of Economy, told IPS.

“The reform should be an opportunity to redesign the pension system from the very foundations, in order for it to offer equal benefits to men and women.” -- Julia Evelin Martínez

The system was designed “based on the labour experiences and lives of men,” she said.

María Elena Rodríguez, 54, a street vendor who sells fruit at a stand on a San Salvador street, said the outlook for her old age is grim.

“I don’t have any coverage, I pray that the lord will give me the strength to work until I’m 65, and then I’ll ask my children to put me in an old-age home, because I don’t have any pension, I have nothing,” Rodríguez told IPS as she sold papaya slices to passersby.

She has three children, but says she doesn’t “want to be a burden for anyone,” adding that after a life of hard work, she should have the right to an old age without worries.

Lawmakers did not create rules enabling people in the informal sector of the economy to be covered by the system, which only applies to formally employed wage-earners.

With contributions by their employers, those covered by the system pay 13 percent of their wages into individual accounts managed by the pension fund administrators (AFPs), which take a 2.2 percent commission and invest the money.

Since late 2015, the government, the business community, academics and social organisations have been discussing what to do with the pension system which, since it was privatised in 1998, has neither expanded coverage nor improved pensions, as promised.

According to official figures, as of November 2015, 2.7 million people were enrolled in the pension savings system (SAP), in this country of 6.3 million people with an economically active population (EAP) of 2.8 million.

But 65.7 percent of the EAP works in the informal sector, while only 24.7 percent actually pays into the system, despite the fact that nearly everyone is formally enrolled, because at some point they registered and their names are still in the system.

That means only one out of four people in the EAP will have coverage when they retire, and many of these will draw very small pensions.

The debate is currently focused on how to improve returns in the pension funds, which were worth a total of 7.3 billion dollars in November. If the returns increase, pensions will grow.

Around 58 percent of that total is invested in pension investment certificates issued by the state, with low interest rates between 1.4 and three percent. Legally, El Salvador’s AFPs cannot invest in the international stock market, where the returns are higher, although the risks are too.

The government of left-wing President Salvador Sánchez Cerén wants to go even further, proposing a reform to create a mixed system that would include the private pension fund administrators – an idea that is opposed by the business community and the right-wing opposition.

Little information about the proposed reform has come out. But the government is reportedly proposing that workers who earn less than 484 dollars a month would be covered by a public system, and the rest by a mixed one.

In this debate, “we want to incorporate a gender perspective in the pensions system,” said Zaldaña, who also belongs to a group fighting for decent jobs for women, the CEDM.

The government acknowledges that women face unequal conditions. They retire at the age of 55, compared to 60 for men, which means they pay less into their accounts, and thus receive lower pensions when they retire.

To that is added the fact that they earn 15 percent less than men on average, even though on average women have more years of formal schooling, according to the United Nations Development Programme (UNDP) Human Development Report 2015.

The lower their wages, the less they pay into their individual accounts, under the current system.

“The problem is that culturally the population still has no awareness about the inequality in wages,” a public employee in a government office, Johana Peña, told IPS.

Roberto Lorenzana, the president’s secretary on technical questions, said in remarks to the government online news outlet Transparencia Activa that the gender imbalance is “a problem that we need to address” in any future reform.

He said the government’s position on this has points in common with that of the Salvadoran Association of Pension Fund Administrators (ASAFONDOS), which represents the country’s two AFPs.

However, it is unclear as to what changes are proposed to move in that direction, and Lorenzana and René Novellino, executive director of ASAFONDOS, did not respond to requests from IPS for an interview to discuss the issue.

Martínez, the researcher, believes the debate should look at the foundations of a system that is unfair to women – a problem that she said is not only seen in private systems.

“The reform should be an opportunity to redesign the pension system from the very foundations, in order for it to offer equal benefits to men and women,” she said.

The economist pointed out, for example, that women with formal jobs stop paying into the system during their four months of maternity leave. If they have an average of three children, they will have stopped paying towards their retirement for an entire year.

That time lost is added to the five years that they do not pay into the system as they retire earlier than men.

“This creates a distortion, a gap, a discontinuity, which is reflected in their labour history,” said Martínez.

Zaldaña, the head of FEASIES, said these gap periods should be counted as time worked, and the state should contribute the funds to make up for that lost time. This proposal has been presented to Lorenzana, she said.

A similar reform was implemented in July 2009 in Chile, where the government offers a bonus per child to each female worker.

The economist Martínez is pleased that the trade union movement is pushing for these changes, while she lamented that women’s rights groups in El Salvador have not taken up the battle.

Meanwhile, Rodríguez said, without slowing down in her sales of fruit to her customers, that she scrapes by “with the few cents that I make from my fruit stand, but I don’t know what I’ll do when I’m old.”