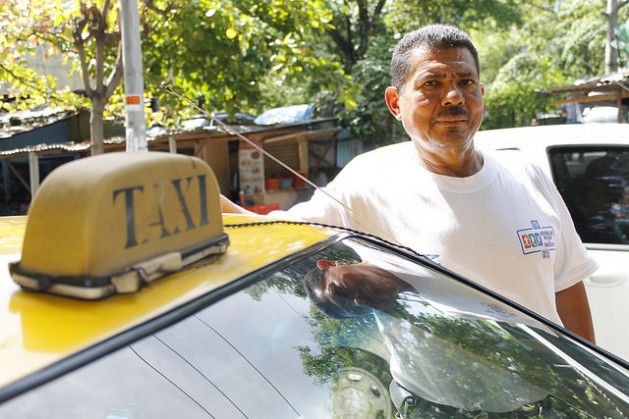 Manuel Campos, a 56-year-old taxi driver, is not covered by either the public or private pension system in El Salvador. His only hope is that his children will support him in his old age. Credit: Edgardo Ayala /IPS

SAN SALVADOR, Aug 29 2014 (IPS) - Two of the promises made 16 years ago when El Salvador’s pension system was privatised have failed to materialise: There was no expansion of social security coverage and no improvement in pensions. Now pressure is growing for a reform of the system.

Although 20-year-old Kevin Alexis Cuéllar is one of the 2.7 million people enrolled in the private Pensions Savings System (SAP), he has no coverage.

Cuéllar, who is self-employed and does not have steady work, told IPS that he does not pay into the private account which will supposedly provide his pension when he retires. Men in El Salvador retire at the age of 60 and women at 55.

The system established in 1998 has run up against the reality of employment conditions in this Central American nation of 6.2 million people.

A 2013 report by the International Labour Organisation (ILO) and the United Nations Economic Commission for Latin America and the Caribbean (ECLAC) found that 65.7 percent of the economically active population works in the informal economy. Based on statistics from 2011, that is equivalent to 1,269,000 people.

Cuéllar operates a sound system at business events promoting brand awareness. Forced to drop out of school to work before finishing the eight years of basic education, it will not be easy for him to find formal employment in this country, which has no specific plans to reduce the size of the informal sector.

The situation worries him. “The time will come when I won’t be able to work, because of old age or sickness, and we’ll be left without a pension,” he told IPS.

That fear is shared by the tens of thousands of families who have no social security coverage.

“It was clearly the business deal of the century, the right to a pension was commodified, to the benefit of financial groups.” -. Trade unionist Francisco García

Expanding coverage “is one of the pending challenges” of the private system, María Elena Rivera, a researcher at the Guillermo Manuel Ungo Foundation (FundaUngo), told IPS.

Although 2.7 million people are enrolled in the private pension scheme, only 653,257 are active contributors, according to figures from July. The rest are not formally employed.

That means only one out of four people of working age are active contributors to the private pension savings scheme, Rivera said.

The government of rightwing president Armando Calderón dismantled the public social security system in 1998 and created the private pensions scheme, in the midst of a wave of privatisations sweeping Latin America.

Under the new scheme, contributions from workers and employers generate a payment of 13 percent of the monthly salary that goes into the employees’ individual accounts.

These individual savings will produce, after 25 years of contributions, the money that will pay the pensions of workers once they reach retirement age.

Participation in the SAP was mandatory for workers under the age of 36. Their individual accounts are run by pension fund administrators (AFP).

Men over 55 and women over 50 had to stay in the public system, which is to disappear as that generation gradually retires and passes away.

In the public pay-as-you-go system, all workers pay into the same fund, which is financed on the basis of solidarity between generations.

“It was clearly the business deal of the century, the right to a pension was commodified, to the benefit of financial groups,” the secretary of the Workers’ Union of the National Institute for Public Employees’ Pensions (SITINPEP), Francisco García, told IPS.

The union wants to return to a mixed system, with the state controlling the pension system, and the AFPs as optional.

The government of leftwing President Salvador Sánchez Cerén, in office since June, said the private system has failed. But it has not given any indication of what reforms it will push through in the next few months – although it has ruled out a return to a public social security system.

In July, SAP had just under 7.5 billion dollars in accumulated contributions. Those funds were initially to be invested in El Salvador’s stock market, and the yield would go into the employee’s account.

Investing the funds in the stock market was also supposed to help drive the country’s productive development, by giving a boost to key sectors of the economy, generating more formal sector jobs and making it possible to expand coverage. In addition, the pensions would be improved.

The minimum retirement and disability pension is 207 dollars a month.

But the local stock market is too small to help productive enterprises get off the ground, analysts say, and formal employment did not receive the expected boost, nor did pensions grow.

Manuel Campos, a 56-year-old taxi driver, who is not enrolled in either the public or private pension systems, only hopes that once he is too old to work, or if he falls ill, his three children will help support him.
“If I didn’t have that hope, maybe I would have to do what so many people are doing today: beg on the streets,” Campos told IPS while waiting for customers on a street in San Salvador.

In another part of the capital, 40-year-old Sandra Escobar is preparing lunch that she will sell at noon in the business where she works as a cook: a small tin shack on the side of the road.

“My idea is to save up, little by little, to have something for my old age. But it’s hard,” said Escobar, while cooking beef in a frying pan.

When most of the younger workers opted for the private system in 1998, the government assumed the burden of the underfinanced public system, which according to the latest data, from 2012, was around 420 million dollars a year.

That is the amount needed to pay the pensions of the employees who stayed in the public system: 100,247 as of October 2012, according to a document from the Salvadoran Association of Pension Fund Administrators (ASAFONDOS), which represents the two AFPs.

In 2006, the legislature approved the Fideicomiso de Obligaciones Previsionales (pension trust fund), through which the AFPs are legally obligated to invest part of the funds in bonds issued by the state, and thus obtain the resources for paying pensions.

But these bonds have low returns, 1.4 percent a year, not enough to significantly increase the pensions of workers. Legally, El Salvador’s AFPs cannot invest in the international stock market, where they would obtain higher returns.

IPS was unable to obtain an interview with the president of ASAFONDOS, René Novellino. But a report he published in 2013 proposed approving a gradual opening up of the system, with clear limits and strong oversight, to investment in international stock markets, among other measures.

FundaUngo is calling for a national dialogue, so all of the sectors can set forth proposals for reforming the system.

In the meantime, soundman Kevin Cuéllar, cook Sandra Escobar and taxi driver Manuel Campos continue to face the reality of informal employment, with no prospects for receiving a pension when they reach retirement age.