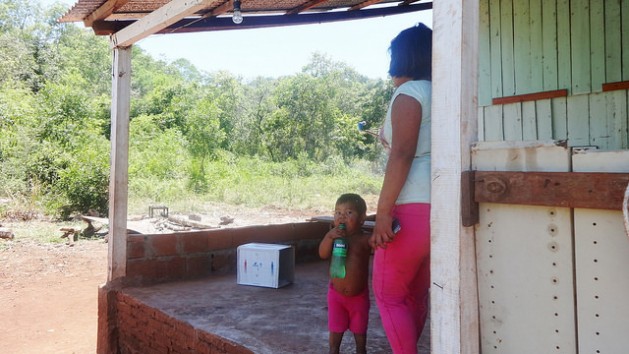 A teenage mother and her toddler in Bonpland, a rural municipality in the northern province of Misiones in Argentina. Latin America has the second highest regional rate of early pregnancies in the world, after sub-Saharan Africa. Credit: Fabiana Frayssinet/IPS

BUENOS AIRES, Jul 8 2016 (IPS) - In plain and simple language, an Argentine video aimed at teenagers explains how to get sexual pleasure while being careful. Its freedom from taboos is very necessary in Latin American countries where one in five girls becomes a mother by the time she is 19 years old.

“For good sex to happen, both partners have to want it and this is as much about being sure they want it, as about being in the mood or ‘hot’ with desire,” said psychologist Cecilia Saia who made the video “Let’s talk About Sex” (Hablemos de sexo), aimed at adolescents and preadolescents and posted on social networks.

The video was produced by Fundación para Estudio e Investigación de la Mujer (FEIM – Foundation for Women’s Studies and Research) as part of a Take the Non-Pregnancy Test campaign. It was also distributed to teenagers so they “would be able to take free and informed decisions about becoming mothers and fathers.”

During the campaign, teenagers of both sexes were given boxes similar in appearance to pregnancy test kits, containing information about teenage pregnancy and the myths surrounding how it is caused, as well as condoms and instructions on how to use them, Mabel Bianco, the president of FEIM, told IPS.

The campaign was broadcast on YouTube and other social networks, with candid messages in the language used by adolescents. “This meant we could reach a large numbers of 14-to-18-year-olds, an age group that such campaigns usually find hard to reach,” she said.

According to FEIM, in Argentina 300 babies a day, or 15 percent of the total, are born to mothers aged under 19.

“This percentage has shown a sustained increase over the last 10 to 15 years, and the proportion of births to girls under 15 years of age has also risen,” Bianco said.

Argentina exemplifies what is happening in the rest of Latin America, which is the world region with the second highest teenage fertility rate, after sub-Saharan Africa. The national rate in Argentina is 76 live births per 1,000 women aged 15-19 years, according to United Nations’ demographic statistics.

In order to call attention to this problem and to the general need to promote the equal development of women, Investing in Teenage Girls is the theme of this year’s World Population Day, to be celebrated July 11.

The United Nations Population Fund (UNFPA) states that one in five women in the Southern Cone of South America (Argentina, Brazil, Chile, Paraguay and Uruguay) will become a teenage mother, in an area where over 1.2 million babies a year are born to adolescents.

“Early pregnancy and motherhood can bring about health complications for mother and baby, as well as negative impacts over the course of the lives of adolescents,” says a UNFPA report about fertility and teenage motherhood in the Southern Cone.

The report says that “when pregnancy is unplanned, it is a clear indication of the infringement of teenagers’ sexual and reproductive rights and hence of their human rights.”

Alma Virginia Camacho-Hübner, UNFPA sexual and reproductive health adviser for Latin America and the Caribbean, told IPS that teenage pregnancy has implications for individual patients, such as maternal morbidity and mortality associated with the risks involved with unsafe abortions, among other factors.

For health services, the costs of prenatal care, childbirth, postnatal care and care of the newborn are far higher than the cost of interventions to prevent pregnancy and promote health education.

This is because “instead of increasing economic productivity by having a larger economically active proportion of the population, a rise in early motherhood causes a rapid rise in the dependency ratio, that is the proportion of the population that is not economically active and requires support from family or society,”she said.

The Southern Cone study found that dropping out of school usually preceded getting pregnant.

In her view, teen pregnancy and motherhood are an issue of inequality which mainly affects women in lower socio-economic strata.

“It is teenagers from the poorest families and with the least education, living in underprivileged geographical regions, that are most prone to becoming adolescent mothers,” she said.

“Becoming mothers at an early age reinforces conditioning and the inequalities in the process by which teenagers who are, and who are not, mothers, effect the transition into adulthood,” she said.

“The main consequence of pregnancy is the interruption of schooling, although in many cases they have already dropped out by the time they become pregnant. But they do not go back to school afterwards because they have to look after the baby,” Bianco said.

“This makes for a poorer future, as these girls will have access to lower-paid jobs and will be able to contribute less to the country’s development. On the personal level, they will have to postpone their adolescence, they cannot go out with friends, go dancing and other typical teen activities,” she said.

Federico Tobar, another UNFPA regional adviser, said that “in addition to strengthening health, education and social services, there must be investment to promote demand, with interventions to motivate young people to build a sustained life project.”

“This involves incorporating economic incentives as well as symbolic remuneration, and also concrete childcare support for teenage mothers so that they can finish school and avoid repeated childbearing, which is frequently seen in these countries,” he told IPS.

Among other positive experiences, Tobar mentioned the Uruguayan initiative “Jóvenes en red” (Young People’s Network) which includes returning to school and work, and promotion of sexual and reproductive health.

“I believe it is important to invest in the education of teenage women, including comprehensive sex education and the capacity to decide whether or not they wish to have children. It is not a question of eliminating all pregnancy in adolescence, but of making it a conscious choice rather than an accident,” Bianco said.