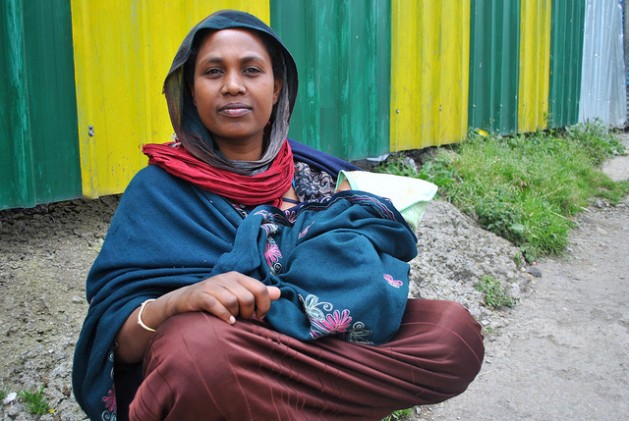 Bosena, 25, sits on the side of a busy road in Addis Ababa, Ethiopia’s capital, with a baby in her arms. Ethiopia is among the countries listed as having made significant progress in reducing child and maternal mortality rates. Credit: Jacey Fortin/IPS

JOHANNESBURG, Jun 30 2014 (IPS) - Every year, three million newborn babies and almost 6.6 million children under five die globally, but if the rest of the world looked towards the examples of two of Africa’s least-developed countries (LDCs), Rwanda and Ethiopia, they would perhaps be able to save these children.

At the 2014 Partners’ Forum being held in Johannesburg, South Africa from Jun. 30 to Jul. 2 – hosted by the Partnership for Maternal, Newborn and Child Health (PMNCH), the South African government and other partners – significant commitments in finance, service delivery and policy were announced that could put an end to these deaths. In total, there were 40 commitments from stakeholders, governments and the private sector who are committed to ending child and maternal mortality were revealed at the forum today.

It was noted that while remarkable progress has been made in reducing maternal and child mortality rates globally, over the last two decades the reduction in the rates of newborn deaths has lagged behind considerably.

However, Rwanda and Ethiopia were among 10 countries across the globe listed as having made significant  progress in reducing child and maternal mortality rates, according to a new global action plan launched at the forum.

“If we don’t invest in agriculture, water and sanitation as well as the health sector then any gains we make in reducing child and maternal mortality will be futile.

According to the ENAP, newborn deaths account for 44 percent of all under five deaths worldwide, and investments in quality care at birth could save the lives of three million women and children each year.

“Now is the time to focus on action and implementation, to ensure more lives are saved,” said Graça Machel, co-chair of the PMNCH.

“Other countries have made progress and others have not, we need to learn from them, so we keep momentum.”

Accompanying the launch of the ENAP, was the launch of Countdown to 2015 report titled “Fulfilling the Health Agenda for Women and Children”, which serves as a scorecard of gains made in maternal and child health.

According to the report, which studied the progress of 75 countries in child and maternal mortality efforts, substantial inequities still persist.

“The theme of the Countdown report is ‘unfinished business,’” said Machel. “Too many women and children are dying when simple  treatment exists.”

Over 71 percent of newborn deaths could be avoided without intensive care, and are usually a result of three preventable conditions; prematurity, birth complications and severe infections.

“Community-based approaches, where governments bring health services to the people and people to the services, have shown to be effective,” she told IPS.

“Monitoring of results is also very important to ensure accountability in the health sector.”

However,  Ethiopia’s Minister of Foreign Affairs pointed out that “these  efforts are are simple but often hard to deliver.”

“Least-developed countries like Ethiopia were able to make strides in curbing child and maternal mortality through their political will,” Dr. Janet Kayita, health specialist for maternal, newborn and child health for UNICEF, told IPS.

But she pointed out that “Ethiopia’s key to success, was not just about the leadership making the decision to reduce child and maternal mortality rates, but also organising at community level.”

“Ethiopia is one of the few LDC’s to institutionalise quality improvement in the health sector, using the mechanism of rewarding good quality health services and holding accountable those not performing.”