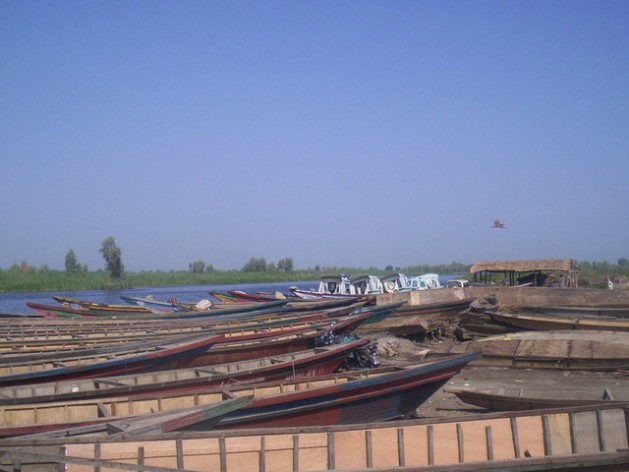 Bordered by Chad, Cameroon, Niger and Nigeria, Lake Chad once spanned 25,000 square kilometres but in the last half century it has shrunk by 90 percent. Credit: Mustapha Muhammad/IPS

Nothing breaks the expanse of sparse vegetation but the occasional withered tree and some scorched shrubs.

As a result of feeble rainfall, the Chari and the Logone – the two main rivers that feed the lake – are bringing less and less water each year.

Herders, fisherfolk and farmers who have relied for generations on the rich soil of this basin are now struggling to survive, as the great lake dries up before their very eyes.

On the banks of the lake, Mahamat Aboubakar is disentangling a tiny black catfish from a large net.

“Before, you needed to cast the net just a few times to get thousands of fish,” Aboubakar tells IPS. “But today, it may require a whole day’s work to get this,” he says, pointing to the miserable catch, which is worth about two dollars and is likely to be his only income for the day.

Back when the lake was healthy and teeming with life, the 64-year old fisherman could earn as much as 50 dollars. Now, he can only expect his catch to get smaller – and himself poorer – as the lake’s waters continue to recede.

“This is a disaster,” Sanusi Imran Abdullahi, executive director of the Lake Chad Basin Commission (LCBC) – a regional body created by the countries bordering the lake with the aim of regulating water use and other natural resources in the basin – tells IPS. 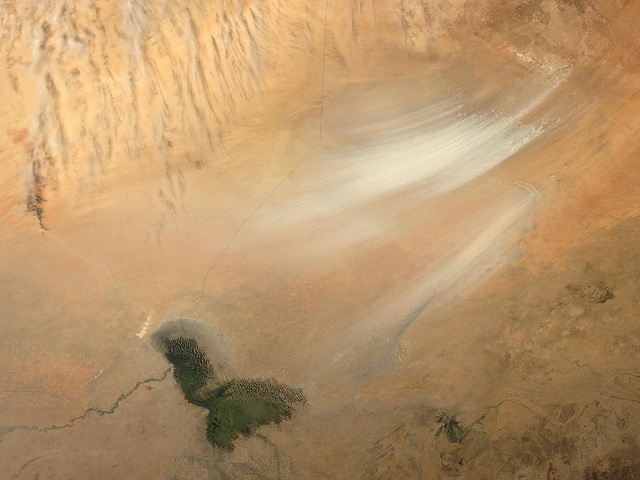 “It is already taking its toll on residents around the lake,” he adds. In order to prevent a potentially catastrophic situation, “we are working to save Lake Chad and the 30 million people whose livelihoods depend on the natural resources” of this water body.

It is impossible to blame the crisis on one single factor, experts say.

Environmentalist Paul Ghogomou of the University of Yaounde in Cameroon tells IPS, “Desertification, climate change as well as the continuous diversion of water from the rivers that feed the lake are responsible.”

He explains that water from Cameroon’s Chari River – which, fed by its tributary, the Logone, provides over 90 percent of Lake Chad’s water – is being diverted to irrigation projects in the surrounding area.

Meanwhile, dams built along the Jama’are and Hadejia Rivers in northeastern Nigeria are “partly responsible for the shrinkage”, he says.

“Forty years ago, the population within the Lake Chad area was about 17 million. Now, we number about 30 million. So rising demand by the population, the rising numbers of livestock as well as massive evaporation as a result of climate change have all combined to shrink the lake,” he notes.

For the time being, farmers and fisher folk are showing resilience, adapting as best they can to a looming crisis.

Ahmadou Bello, a fisherman in Gulfe, has simply turned to farming, producing such crops as cowpea, maize, rice and peppers without using fertilisers.

Showing off this thriving farm with a wave of his hand, he tells IPS the disappearing lake has “left behind very fertile land”.

But if the lake does not return, even the remaining humidity left by its receding waters will evapourate, and farmers will be left with few options for a livelihood.

Can the waters be replenished?

In an effort to implement more sustainable solutions, member countries of the LCBC – Chad, Cameroon, Niger, Nigeria and the Central African Republic (CAR) – have developed an ambitious plan to replenish the lake with water from the Obangui, a tributary of the Congo River.

Abdullahi says the project will involve the “construction of a retention dam at Palambo (upstream of the CAR’s capital Bangui) to serve as a catchment area. The high flow through pumping will then enter River Fafa – a tributary of Ouham – and by gravity through a 1,350-kilometre-long feeder channel (flow) in to the River Chari in Cameroon and then to Lake Chad.

“There is so much water in the Congo that goes into the ocean. We are just going to take a fraction of it to save the lives of 30 million people who depend on the lake for their survival,” he says.

He further explained that the project would also extend the electricity supply, ensure river transportation in order to move goods from east to west across Africa and develop irrigation and agro-industry in the region.

“So the programme isn’t only (designed) to bring water to Lake Chad, but also to improve economic activity and the livelihoods of people within the Congo Basin,” he tells IPS.

But a dearth of financial resources is likely to delay the project’s implementation – according to Abdullahi the scheme will cost a staggering 14.5 billion dollars

While heads of state in the region have shown some political commitment, the LCBC is primarily looking to the global community for help.

“We will host an international donors’ conference early this year to see what we can get, and from there we will (assess) what the member states will contribute,” he explains.

The bulk of the financing is likely to come from the private sector, as long as funders are guaranteed a return on their investment. “I am sure they will be interested,” says an optimistic Abdullahi.

The cost of the project may look frightening, but the cost of inaction could be even more devastating, experts say.

According to the Canadian firm CIMA-International, which carried out feasibility studies on the water transfer project, Lake Chad could disappear altogether by 2025 if nothing is done to save it.