DORON-BAGA and KANO, Nigeria, Jan 8 2010 (IPS) - The fittest are fleeing the shores of Lake Chad: Adamu Modu, a young fisherman, is joining a stream of able-bodied men heading south to find work in the southern part of the country. 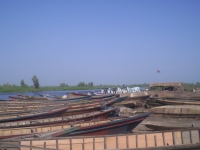 “I am now relocating to Ibadan in the south, where fish is abundant, to continue my fishing so that I can make my life better,” the 25-year-old says.

“We used to catch plenty of fish here. A fisherman used to catch fish amounting to 3,000 naira (equivalent of $200) in a single day, but now our catch is reduced to 750 naira a day, or even less.”

The decades-long shrinking of one of Africa’s largest lakes is driving people like Modu south. Women and children are becoming a majority in villages like Modu’s home, Doron-Baga, on Lake Chad’s Nigerian shore.

The reduced profit from fishing led Ramatu Abdullahi’s husband to leave town three months ago, also heading south, promising to send money home to help her to care for their four children. The migrants who don’t find work fishing elsewhere will likely end up as petty traders or manual labourers in big cities like Ibadan or Lagos; few will make enough money to adequately support the families left behind.

Abdullahi is not sitting in idle hope in Doron-Baga, but the yield from her farm is also under pressure.

“Desert keeps encroaching on farm lands. As the water recedes, sand from the Sahara takes over in its stead,” she says, pausing from weeding her vegetable plot.

“It has been a battle for survival,” Abdullahi says. “When I realised that my harvest from rain-fed farming was steadily declining, I turned to irrigation, but the yield is also not encouraging.”

Over the past three decades, Lake Chad has shrunk to less than 10 percent of its original size, according to figures from the Lake Chad Basin Commission (LCBC), an agency jointly run by seven West, North and Central African countries.

“The lake has receded from (a surface area of) 25,000 square kilometres to less than 2,000 sq km in the past 30 years. It keeps drying up due to climatic conditions and human activities at the up-stream,” says Dr Ibrahim Goni, a geologist at Maiduguri University in northeastern Nigeria who has studied the lake.

“We have seen drastic reduction in rainfall in 40 years. Rainfall has reduced by half, from 800 millimetres (per year) in the 1960s to around 400 millimetres at the moment,” Goni says.

“This has resulted in incessant drought. Worse still, rivers and the tributaries that feed the lake have shrunk due to poor rainfall, which seriously reduces the volume of water they empty into the lake.”

Experts observe that climate change is attacking the lake on two fronts – reduced rainfall and accelerating evaporation due to higher temperatures. The water is vanishing along with the livelihoods of the more than 30 million people living in fishing and farming communities around this lake which straddles the borders of Nigeria, Chad, Niger and Cameroon.

Human activity is also contributing to the problem more directly. Numerous small dams in Niger, Cameroon and Chad have drastically reduced water inflows through the Chari and Logone rivers.

“Construction of irrigation dams upstream, such as Tiga and Challawa dams in Kano, reduces the water that empties into the lake,” says Goni.

Upstream of the lake in Nigeria, catches are dwindling as a result of low volumes of water in the Hadejia river, one of the tributaries of the Komadugu-Yobe river that eventually empties into Lake Chad.

The spread of a species of cattail reed (Typha australis – known locally as kachalla) is creating problems for fishers and farmers alike. The tall, deep-rooting and fast-spreading reed has been rapidly spreading along the river since the Tiga dam was completed in the 1970s. The altered flow of water through the river system allowed shallow water to stand for longer periods, perfect conditions for the spread of kachalla, particularly on the fertile flood plains adjoining the river.

Fishing is made more difficult where the reeds choke waterways. The reeds grow so densely that they sometimes block the course of the river, diverting it along new paths and destroying cultivated land. As though this was not enough, kachalla also provides ideal habitat for the destructive quelea bird, huge flocks of which frequently destroy crops just before harvest.

“I can’t live here and die of poverty,” says Adamu Modu as he bids his friends farewell in Doron-Baga, but perhaps he is leaving too soon.

Late in 2009, the Lake Chad Sustainable Development Support Programme, a project partly-funded by the African Development Bank was launched. Over six years, the Programme will clear some of the water channels entering the lake, begin addressing the aggressive vegetation choking the lake, set up mechanisms to fix 8,000 hectares of sand dunes, and undertake anti-erosion measures on a further 27,000 ha around the lake.

Some of the funds from the 95 million dollar scheme will also go to studying how to reduce the harm done by dams and irrigation projects upstream, as well as how additional water can be diverted to replenish the thirsty lake.

The Lake Chad Basin Commission, run jointly by the four countries that share the lake as well as Libya and the Central African Republic, has an ambitious plan to resuscitate the lake by diverting water from the Oubangui river in the Republic of Congo.

A feasibility study by a French consortium has been commissioned to determine how the project can be designed to refill Lake Chad as well as improve navigability of the Chari river through which the water would be channeled – while avoiding causing new problems.