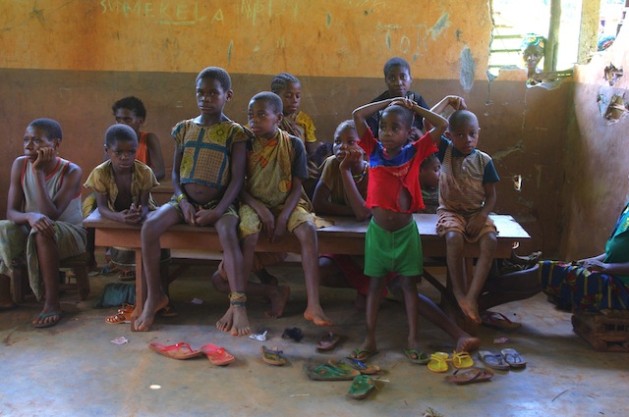 BAKASSI PENINSULA, Cameroon, Sep 18 2013 (IPS) - Thomas Effiom, a 35-year old fisher in Jabane, a small locality in Cameroon’s Bakassi Peninsula, scoops off floodwaters from the muddy floor of his house. It is a ritual he performs each time the Atlantic Ocean overflows.

“It’s a huge problem here,” he tells IPS. Very often, floodwaters wash away the homes of residents here as the stick structures offer very little resistance to the forces of nature.

It has been a little more than a month since Cameroon took full sovereignty over the Bakassi Peninsula, a 665 square kilometre territory consisting of a number of mangrove-covered islands.

Effiom, like some 90 percent of the 300,000 people here, is Nigerian and was born and raised in Bakassi, an oil-rich territory in the Gulf of Guinea, over which Nigeria and Cameroon have had a long-standing dispute.

And while he is uncertain of how the Cameroonian government will accept and provide for the Nigerians living in the area, he is reluctant to return to Africa’s most populous nation of over 168 million people.

Head of the Bakassi Association of Fishermen James Nnandi told IPS that he was uncertain of his future here under Cameroon rule. But while he would have loved to go back to Nigeria, he said he has two wives and seven children to feed.

“We survive here on fishing. It is with fish that I am able to feed my family, and I can’t be sure to get another job in Nigeria,” 50-year old Nnandi told IPS.

In 2002, the International Court of Justice had ruled that the peninsula belonged to Cameroon. But it took a further four years before Nigeria agreed to hand over the territory to Cameroon.

Two years later, in 2008, a five-year transitional period began, which ended on Aug. 14 with Cameroon finally taking full sovereignty of the area.

According to the terms of the Greentree Agreement negotiated between Cameroon and Nigeria with United Nations backing on Jun. 12, 2006, Nigerians in the area could choose either to return to Nigeria or stay in Bakassi. Those who chose to stay could maintain their Nigerian citizenship or naturalise as Cameroonians.

In either case, the accord requires that Cameroon respect the fundamental rights of Nigerians here.

But staying in Bakassi also means living without access to healthcare and basic services like electricity and running water. And the central African nation of Cameroon still has much to do to improve the lives of those living here.

Glory Benson, a 40-year-old Nigerian teacher from Bakassi Peninsula, said that the healthcare system in the area was precarious.

“For women to deliver here is not an easy task. So we want the government to provide a midwife in the hospital here that can be helping us,” she told IPS.

Pierre Mufuh Chong, head teacher of the Wabane Government Primary School, said he has a hard time convincing parents to send their kids to school.

Although the government has long made primary education free, Chong estimated that enrolment rates could stand at less than 50 percent.

“The parents are very mobile. They travel with their children to sell [mainly smoked fish]. When they struggle to bring up the children, the parents take them to Nigeria at times. When we find it very difficult to get the children [to attend] school, I personally and my staff go from door to door. We do what we call educational evangelism, so as to encourage the children to come to school,” he told IPS.

For Cameroon’s control of the area to be effective, it needs to have a more efficient development policy for the Bakassi Peninsula, according to Professor Ntouda Ebude, an expert in geo-strategy and a lecturer at the University of Yaounde.

Ebude told IPS that it is unlikely that Cameroon will meet the U.N. Millennium Development Goals (MDGs) in the Bakassi Peninsula. The goals include access to education, reducing maternal mortality and poverty.

He said although official statistics on maternal and infant mortality were hard to come by, simple observation indicated that many women in the peninsula die while giving birth, and many children die in their infancy.

Since 2010 the Cameroon government has set aside about eight million dollars for development projects in the area.

But even governor of Cameroon’s South West Region, Bernard Okalia Bilai, admitted in August that the Bakassi Peninsula lacked basic resources of electricity and water despite the government’s investment. He also noted that civil servants from the area did not always reside in Bakassi, and asked them to remain there.

“The government is working to improve life here, but you need to persevere for a while, because that could also be your own patriotic contribution to the development of the area,” he had said.

But according to Bertha Ndoh Bakata from the Co-ordinating and Follow-up Committee of the Implementation of Priority Projects for Bakassi, the government has been able to construct schools, health centres, administrative buildings and fishing infrastructure for locals.

“Two well-equipped health centres have been constructed, and there is a primary school in each of the four sub-divisions that make up the Bakassi area,” she told IPS by phone.

However, the area has only two medical doctors who have to span the four sub-divisions that make up the area.

“Take child mortality and maternal health for instance. It’s true we are seeing some health centres being constructed, but where are the medics? Where is the equipment?

“And then there is malaria, which is so rampant here since people stay in tattered structures built with sticks and therefore cannot even protect themselves from mosquitoes. So it’s very unlikely that Bakassi can ever meet the [MDGs] targets in the health sector by 2015,” Ebude said by phone.

However, Bakata said that this year the Co-ordinating and Follow-up Committee of the Implementation of Priority Projects for Bakassi would begin construction on a road to Bakassi “and this will be a huge relief to people in this area.”