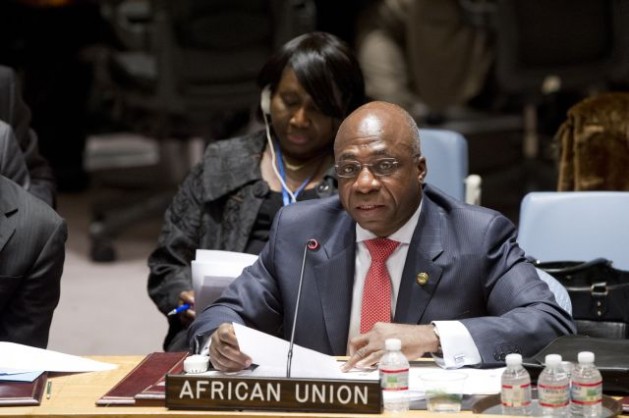 Téte António, Permanent Observer of the African Union to the UN, briefs the Security Council on the African-led International Support Mission to the Central African Republic (MISCA) on Jan. 6. Credit: UN Photo/Evan Schneider

“It’s a wonderful feeling, and I am hopeful this mayhem will finally come to an end, so we can go back home,” said Denise Atteh, another CAR refugee.

“You can’t imagine what it means to leave your country, your home and property and run to another country." -- refugee Denise Atteh

Edjangue and Atteh are just two of the 52,000 Central African refugees who have fled sectarian violence in their country.

Their newfound optimism comes in the wake of the resignation of the interim president of the CAR, Michel Djotodia, along with his prime minister, Nicolas Tiangaye. Djotodia had seized power in a March coup.

Both men stepped down on Friday, Jan. 10 during the Extraordinary Summit of the Economic Community of Central African States (ECCAS) held Jan. 9 and 10 in Chad.

“It was long overdue,” Atteh told IPS, a smile on her face.

“You can’t imagine what it means to leave your country, your home and property and run to another country. It’s hard to bear,” she said.

In the capital Bangui, there were celebrations in the streets when the news of Djotodia’s resignation broke.

“People are hopeful that at long last, the killing, the maiming, the horrible bloodshed could be coming to an end,” Cameroon’s interim ambassador to the CAR, Nicolas Nzoyum, told IPS by phone from Bangui.

He said the hopes for a return to peace are heightened by the fact that the Séleka rebels who helped Djotodia to power had long turned against him.

The patience of the international community for Djotodia had also petered out, and he had been under intense pressure to step down.

Announcing Djotodia’s resignation on Jan. 10 in N’Djamena, Chad, Ahmat Allami, secretary-general of the ECCAS, said that “if Djotodia could not succeed in restoring peace, he should make way for someone else.”

Under the Charter of the National Transitional Council or parliament led by Alexandre Ferdinand Nguendet, an interim president to replace Djotodia has to be chosen within 15 days from the day of Djotodia’s departure.

The National Transition Council (NTC), or provisional parliament, will begin consultations on Monday with politicians and civil society members on electing a new interim president.

Deputy NTC speaker Lea Koyassoum Doumtasaid that the new leader “must be someone who can unite Central Africans, restore security, ease tensions, put everybody back to work, and pave the way for free, democratic and transparent elections.”

But Djotodia’s departure could also spell even greater problems for the war-torn nation. With a weak transitional government, the likelihood of a speedy return to peace remains uncertain.

According to Cameroonian analyst Prof. Ntuda Ebode, the nature of the conflict itself will make a return to peace quite difficult.

“The conflict is multi-faceted. Initially it was a political conflict as the Séleka rebels sought to take power by overthrowing president François Bozize,” he said.

“But once the president was overthrown, the new leadership failed to maintain internal cohesion, and the consequence was that the conflict spiralled out of its purely political realm, and became at the same time social and military,” he told IPS. “And the religious schisms are so deep that it will take a lot of time to heal.”

A statement from U.N. Secretary-General Ban Ki-moon read out to heads of state and governments of the ECCAS meeting in N’Djamena further confirms these fears.

“The events of last year have caused profound damage in the relationships between Muslim and Christian communities in the CAR. Distrust is high and violence has fuelled anger and a thirst for revenge,” Ban said.

“The security situation has gravely deteriorated in recent weeks, with unprecedented levels of communal violence. The danger of further upheaval along religious lines is real and poses a long-term danger to the country.”

At least 1,000 people have been killed since the crisis broke out last year, and over a million have fled their homes.

The African Union has deployed some 4,000 soldiers to CAR along with 1,600 troops deployed by the former colonial power, France.