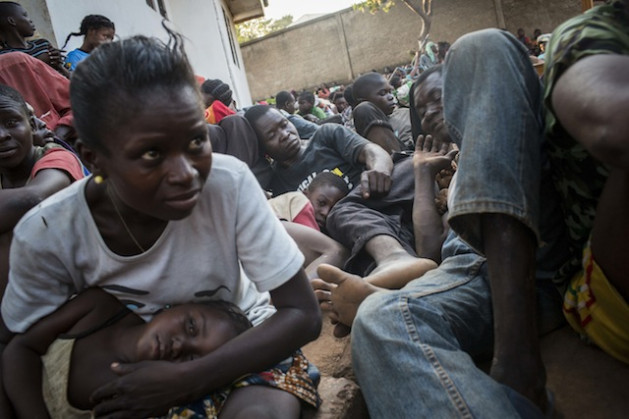 Residents of Bossangoa, in Central African Republic, shelter from gunfire as Multinational Force of Central Africa (FOMAC) peacekeeping troops move to try to protect the population from anti-balaka attacks in the town. Dec. 5, 2013. Courtesy: Marcus Bleasdale/VII for Human Rights Watch

ADDIS ABABA , Dec 10 2013 (IPS) - The African Union is preparing to deploy thousands of troops in the Central African Republic as a deadly conflict there spirals further out of control.

On Monday, Dec. 9, African Union (AU) Deputy Chairperson Erastus Mwencha met with diplomats at its headquarters in Addis Ababa, Ethiopia, to work out the details of AU troops’ deployments, logistics and funding. After the meeting, he told IPS that Burundi is the only confirmed troop supplier so far, but several other countries including Rwanda and the Republic of the Congo are discussing sending forces as well.

French troops have already begun deployments in the capital city of Bangui, which was taken over by a rebel coalition called Seleka in March. Since beginning their advance across the country in December 2012, Seleka fighters have caused turmoil across the countryside, further destabilising areas already plagued by rampant poverty and food insecurity.

In Bangui the situation has been especially dire since Thursday, Dec. 5, Amy Martin, head of the Bangui branch of the United Nations Office for the Coordination of Humanitarian Affairs, told IPS. “Heavy arms were being fired, light weapons were being fired, and tensions remain very high in some neighbourhoods,” she said, adding that the problems are just as serious outside of the capital.

“The population is fatigued – they have no food left for their families, and they've been looted so many times.” -- Amy Martin, head of the Bangui branch of the U.N. Office for the Coordination of Humanitarian Affairs

“In the interior, Seleka units have taken control of territories, and whoever was the commander became the law in each town. Those people, having no support from the central government, are basically living off the population, partly through illegal taxation. So you end up with a bunch of warlords and criminal gangs.”

A U.N. resolution last week approved the deployment of up to 1,200 French and 3,500 African troops to help stabilise the country of 4.6 million. But following the recent surge in violence, which has already killed at least 400 people in Bangui since Thursday according to the Red Cross, African and European leaders agreed at a weekend summit in Paris to increase the number of French troops to 1,600, and the number of African troops to as much as 6,000.

Regarding funding, Mwencha noted that “we have been grateful that the U.S. and the European Union have already made some indication to support these operations, and so we are also trying to coordinate to see how their support can be channelled to support this mission.”

“MISCA is going to be an African mission, so all troops [will] be under the command of the African forces, but there will of course be a transition,” Mwencha said. “There was MICOPAX and there are the French, but all those will converge with the African forces once we’re on the ground.” 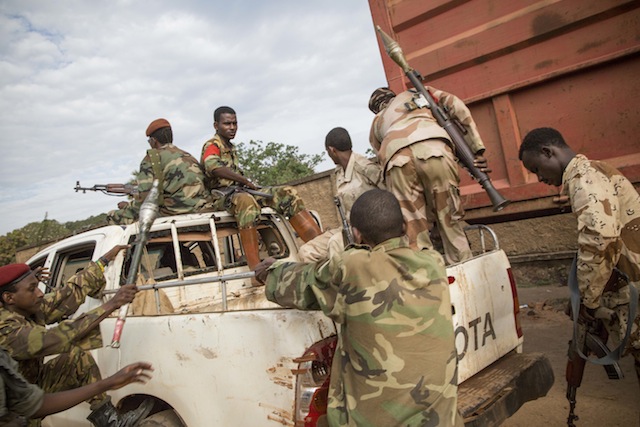 Local Seleka forces exit the Multinational Force of Central Africa (FOMAC) compound after their commander, Colonel Saleh, met with Captain Wilson of the FOMAC peacekeepers at the FOMAC compound during a lull in the fighting between anti-balaka and Seleka forces. Dec. 7, 2013. Courtesy: Marcus Bleasdale/VII for Human Rights Watch

But the CAR crisis has raised some doubts of African troops’ abilities to quell violence on the continent, according to Thierry Vircoulon, the International Crisis Groups’ project director for Central Africa. “Unfortunately, the French are the only ones willing and able to do the job at this stage. The African peacekeeping force demonstrated its ineffectiveness to secure Bangui,” he said to IPS, noting that the French troop deployment was welcomed by CAR and its neighbours during the U.N. summit.

At the Paris summit, leaders discussed the prospects of setting up a permanent African force capable of intervening independently in times of crisis, rather than wading through the logistics of each individual deployment whenever crises occur.

“The African countries must now fulfil the 6,000 troops ceiling for MISCA, and everybody wonders whether they can do this, and how fast,” said Vircoulon. “The CAR crisis has reinforced the scepticism about the peace and security architecture to say the least.”

As African soldiers gear up for deployment, the humanitarian situation in CAR is worsening by the day. Hundreds of thousands of people – about 10 percent of the population – have been displaced and about 25 percent are in need of food aid, according to the U.N. Seleka rebels have been accused of committing severe human rights abuses against men, women and children over the past year.

Seleka first coalesced for political reasons – its leaders sought the ouster of former president Francois Bozize. Former Seleka commander Michel Djotodia has taken over as president of CAR and has promised to hold elections within 18 months. He formally dissolved his already-disintegrating rebel coalition in September but has failed to enforce law and order.

Many one-time Seleka members have turned to looting and banditry, spurring the rise of self-defence groups called “anti-balaka”. The worsening tensions between the mostly-Muslim rebels and the majority-Christian civilian population now threaten to turn the crisis into a religious conflict.

“The population is fatigued – they have no food left for their families, and they’ve been looted so many times,” said Martin. “And out of this evolved more organised armed groups, and that’s what we’ve seen since August: anti-balaka groups have been gaining strength and becoming more organised. But there’s no government; there’s no vision of leadership to put this country back on track. It’s anarchy.”

Now that the troops are rolling in, CAR citizens are waiting to see whether the escalating conflict can finally be subdued. AU Deputy Chair Mwencha gave no specific time frame for MISCA, saying it would be operational until CAR achieved a stable system of governance.

“First of all, there has to be peace and security to get the institutions up and running again, and to start organising elections,” he said. “But the ultimate game is to, as quickly as possible, organise an election so that they can have an a legitimate authority. Once Central Africans are in charge of the situation, there will be no need for us to continue to stay there.”