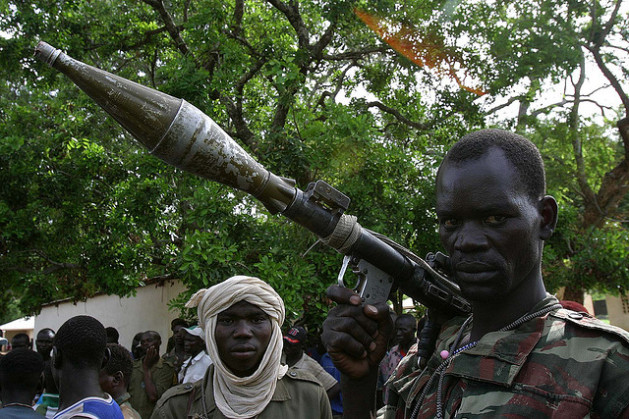 UNITED NATIONS, Nov 26 2013 (IPS) - France has said it will circulate a Security Council draft resolution Monday night that would create a U.N. peacekeeping force in the Central African Republic, as violence in its former colony threatens to morph into an ethnic conflict.

Earlier in the day, French Foreign Minister Laurent Fabius, who last week said conditions in the country “verged on genocide,” announced France would triple its troop presence there to 1200, bolstering 2,500 regional African troops who have been largely helpless to stem increasingly anarchic conditions.

“Attacks like these on populated areas are causing massive devastation and fear among the population of the Central African Republic." -- Daniel Bekele

“There are no more state security services in Bangui or the rest of the country,” said Thierry Vircoulon, Central Africa project director at the International Crisis Group. “People are left to themselves – only churches can offer anything.”

Since fighting began nearly two years ago, 400,000 people have been internally displaced.

In March, Seleka, a loose-knit coalition of rebel groups from the country’s Muslim north, captured the capital, Bangui, and forced the president, François Bozizé, who rebels accused of failing to abide by previous peace agreements, to flee the country.

But Djotodia’s announcement in September that Seleka would be disbanded set off prolonged bouts of looting and violence committed by disgruntled rebels.

Amnesty International reports that since Bozizé’s overthrow, the number of militants identifying as Seleka has actually increased from 5,000 to 20,000.

And Human Rights Watch Monday accused a Seleka commander of explicitly killing civilians in a Nov. 10 attack in Camp Bangui.

“Attacks like these on populated areas are causing massive devastation and fear among the population of the Central African Republic,” said Daniel Bekele, Africa director at Human Rights Watch.

Last week, the United States pledged 40 million dollars to prop up the regional force that has been holed up in Bangui for months.

Though the International Support Mission to the Central African Republic (MISCA) has plans to increase its numbers from 2,500 to 3,600, leaders in the region are convinced little can be done without the authorisation of a U.N. peacekeeping operation.

Recent reports of attacks on mosques and churches are stirring echoes of times when the U.N. has been slow to prevent genocide.

Following an internal report highlighting the U.N.’s inaction during the final months of civil war in Sri Lanka, the U.N.’s response in the Central African Republic will be seen as a test of promises to act earlier and more decisively to prevent genocide.

Muslims, who dominate Seleka, make up only 15 percent of the Central African Republic.

The conflict comes after “years of marginalisation and discrimination of Muslims in the northwest” of the country, said U.N. Deputy Secretary General Jan Eliasson.

Reports claim that elements of Seleka do not speak Sango, indicating they may have come from neighbouring countries such as Sudan or Chad.

In many parts of the country, members of the Christian majority have responded to the violence by creating their own militias, known as “anti-balaka”, or anti-machetes.

“There were several clashes between Seleka and the population this week,” Vircoulon told IPS. “The African peacekeepers retreated, they cannot prevent them.”

Though the country has a long history of coups and rebellions, religion has not reared its head to such a degree – as it has in the rest of the Sahel – until now.

“This did not start as a religious conflict,” said Philippe Bolopion, United Nations director at Human Rights Watch. “Neither party had a religious agenda.”

As fighting picks up, younger and younger Central Africans are being pulled into the ranks on both sides. UNICEF estimates there are currently 6,000 child soldiers fighting in the country.

Speaking to the Security Council, Eliasson called the suffering “beyond imaginable” and said the U.N. had to act in order to “prevent atrocities.”

But very little information makes its way out of the country, where NGOs are thin on the ground.

Thousands of refugees have fled from major cities into the bush where they are susceptible to malaria and are dying from treatable diarrhea.

Until semblance of order is restored, those who have fled are expected to die in increasing numbers.

“Part of the problem is we don’t know anything,” Bolopion told IPS.

Last week, Secretary-General Ban Ki-moon said he supported a U.N. peacekeeping force of 6,000 troops. But French representative Gérard Araud told reporters the secretary-general’s office would require up to three months to compile a plan of action, pushing into March.

That timeframe leaves many wondering what role France will play in the interim, less than a year after it launched a military operation in Mali to dislodge extremists who had created a de-facto state in the north of the country.