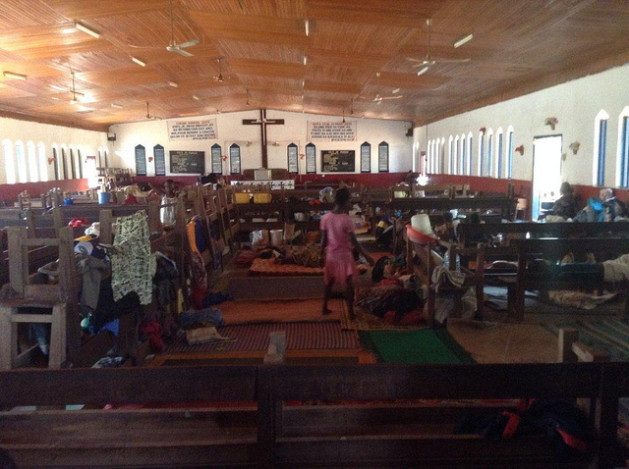 Hamadou is one of 202 Cameroonians repatriated from the Central African Republic (CAR) on Tuesday, bringing the total number of Cameroonians who have returned from the war-ravaged country to 896 in four days.

“My neighbour was butchered like an animal.” -- David Nchami

As the sectarian violence between Christians and Muslims worsens, Cameroon’s President Paul Biya decided that it was time to evacuate Cameroonian citizens living there. Altogether, there are about 20,000 Cameroonians in the Central African Republic.

The new arrivals have been narrating gory tales of violence they witnessed.

“Four Cameroonians – a man, his wife and two children – were roasted to death in Bangui before my very eyes,” Hamadou told IPS.

“My neighbour was butchered like an animal,” added another Cameroonian, David Nchami, who worked as a builder in Bangui.

“A woman was raped and her genitals removed in the capital,” said yet another, Marie-Louise Tebah.

Divine Abada, a miner from southwest Cameroon, told the Cameroon state broadcaster CRTV that the scale of the violence was so terrible he decided to return home.

“These crazy Séléka rebels caught me in the bush, beat us very well, took everything away from us. The only thing that saved me was that they did not see my passport,” he said.

Identifying Abada’s nationality would likely have made things worse, given the apparent hatred the Séléka rebels have for Cameroonians since President François Bozize was ousted from power in March and sought refuge there. The transitional government that took his place has failed to quell the armed clashes and attacks on civilians.

Séléka has also targeted Cameroon for reprisals. In November, a group of suspected rebels crossed over from CAR and attacked military installations at Biti, a border village in Cameroon’s East Region.

A firefight between the rebels and Cameroon’s security forces led to the deaths of seven people, two of them Cameroonians.

The African Union is boosting its troop levels in CAR to 6,000 soldiers, who join 1,600 French soldiers already on the ground in the former French colony.

The governor of Cameroon’s East Region, Samuel Dieudonne Ivaha Diboua, also says his own government has strengthened security along the border.

“We have deployed troops along the 800-km-long border line that divides the two countries,” he told IPS.  “We can’t afford to leave our compatriots at the mercy of evident death.”

Even as Cameroonians at the CAR border live in perpetual fear of attacks by Séléka rebels, thousands of Central Africans are flocking into Cameroon, escaping the violence and bloodshed in their own country.

In early November, the United Nations High Commissioner for Refugees announced that Cameroon was already host to some 90,000 Central African refugees.

Thousands more fled last weekend by boat across the Oubangui River to Zongo in the Democratic Republic of the Congo (DRC), even though the border is officially closed and they risked being shot at.

According to U.N. figures, some 210,000 people have been forcibly displaced by violence in the last two weeks in the embattled capital, Bangui.

The rather large influx of CAR refugees into Cameroon has been causing a lot of unease among the local population.

In September, hundreds of the refugees abandoned their camp in Nadoungué, a small village in Cameroon’s East Region, and relocated to a nearby village in search of better services.

“All we are looking for is water, healthcare, food…these things are not found here,” Dominique Mendo, a CAR refugee, told IPS.

But the continued influx has brought them into conflict with the local population, sometimes necessitating the intervention of security forces.

The Cameroonian government has committed over 500 soldiers to join the AU peacekeeping force, according to Defence Minister Edgar Alain Mebe Ngo’o.

In addition, the 1,600 French troops used Cameroon as a transit port, along with ammunition, bound for Central Africa.

Mebe Ngo’o said Cameroon cannot stay indifferent to the mayhem that is affecting millions of people in CAR.

According to the United Nations, over 500 people have been killed in the capital Bangui alone since Dec. 5.

The U.N. also says the conflict has affected the entire 4.6 million population, with one in 10 fleeing their homes and a quarter of the people going hungry.