BANI WALID, Libya, Oct 31 2011 (IPS) - Suleyman and Rasool have come to the University of Bani Walid, in western Libya. If they are lucky they might find some chemistry notes and, perhaps, a computer that works. Unfortunately it is not likely, since NATO reduced the campus to rubble. 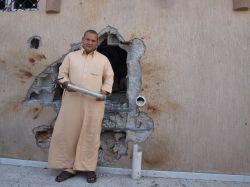 Khaled Abdullah next to the hole in the wall of his home in Bani Walid, the last stronghold of the Gaddafi regime. Credit: Karlos Zurutuza/IPS

Saif al Islam – Muammar Gaddafi’s son and heir apparent – had taken refuge in Bani Walid, a city of 80,000 people 150 km southeast of Tripoli. This city and Sirte, Gaddafi’s hometown, were the last two strongholds of the regime that ruled Libya for the last four decades.

“Why did NATO shell this place?” complains Suleyman amid tons of twisted metal, rubble and papers blown around by the wind.

There is no sign whatsoever of a recent military presence here: no uniforms or mortar shells, not even the bullet cases that dot the broken streets of Bani Walid.

“There was a rumour about Musa Ibrahim – Gaddafi’s former spokesman – sleeping here, probably that’s why they bombed,” says Rasool, standing next to a massive crater left by a NATO missile.

The brand-new red seats in the auditorium are among the few things that can be salvaged. A group of rebels are piling them up in the back of their pickup trucks.

“We are taking them with us to a safe place, there’s been a lot of looting here, you know?” says Omar Rahman, one of the drivers.

But it’s already too late for the computer room in the annex building. There, two rows of intact yet empty computer desks suggest that a new Internet café might open its doors somewhere in Libya in the next few days.

The picture is equally bleak along the bazaar’s long avenue. Only one store has raised its blind. The shopkeeper, Rafiq, doesn’t want to talk. The blackened mannequins he is now removing from inside his shop speak for themselves.

“Zawiya Brigade”, “Misrata boys”, “Geryan forever” can be read along the alley – just some of the graffiti left by the more than forty rebel battalions that finally captured Bani Walid on Oct. 17, supported by NATO air strikes.

Most of the slogans on the walls look alike, but there is one that is repeated throughout the entire city: “Warfalas are dogs”. Bani Walid is the only “monotribal” location in the entire country. Everybody here belongs to the Warfalla clan, Libya’s biggest, made up of over one million people out of a total population of 6.4 million. Along with the Qaddadfa, they were the most loyal to Libya’s ousted ruler.

It is almost impossible to find a house that hasn’t been burnt or looted in Bani Walid. In the southern district of Bahra, a projectile opened a hole the size of a window in Bubakhar Shaman’s apartment. The windows are broken and their shades have disappeared along with the curtains, the television and the radiators.

“They have plundered every house,” the 51-year-old former aircraft technician complains in the courtyard, where there is a mountain of clothes and objects that nobody wanted. Shaman picks up a small, empty jewellery case. “I wonder who is wearing these rings and earrings now.”

Breaking into Khaled Abdullah’s house was even easier. This 24-year-old truck driver was about to marry, and the couple were to move afterwards to the first floor of his family home. But all their dreams dashed out through the ugly hole in his wall.

“I left Bani Walid on Oct. 14, three days before the rebels entered the city. My house was intact,” says Abdullah, who is now renting a flat.

The stories are painfully similar throughout the city. Athila Athman Abdallah, 65, lost two of the trucks he had tried to protect by taking them to the outskirts of the city. Somebody set them ablaze. Nevertheless, Abdallah smiled today for the first time in months when his son brought back his car.

“It was in Geryan, southwest of Tripoli. We were told that they had spotted it so we went there to pick it up,” explains Abdallah from the threshold of his house. “Allah u akbar”- God is great – reads a graffiti next to him. Whether they painted it before or after taking his lamps and curtains and television is irrelevant at this point.

Abdallah says he will stay. But according to local sources, more than 100,000 civilians have fled the former Gaddafi strongholds of Sirte and Bani Walid since the war started in February. However, the number of those seeking refuge in camps could be much higher, as that is only the figure for those who registered.

Sheikh Omar Mukhtar is the leader of the 45 militias currently in control of Bani Walid.

“Many people in Bani Walid were loyal to Gaddafi, so we had to check every single house to make sure nobody was hiding any weapons,” the commander and tribal leader explains to IPS at his headquarters in the city’s airport.

Mukhtar says he does not know where Saif al Islam is. But he believes Gaddafi’s son had to escape on foot after the convoy he was travelling in was reportedly attacked by NATO last week.

“We heard the rocket but when we arrived there we only found the bodies of those who accompanied Saif,” recalls Mukhtar.

The commander admits that looting has happened in Bani Walid, but says that compensation will be paid. “We are almost ready to deliver three million Libyan dinars (1.5 million euros) in gold among the people who were affected,” adds the commander.

Until that day arrives, Abdulhamid Saleh, a local resident, is producing a detailed census of all the victims among his neighbours. The 52 bullet holes in the door of his house attest that, although it was not an easy task, the assailants eventually managed to get in without knocking down the door.

“All these crimes must be brought to the authorities. No one in Bani Walid is willing to work with any administration that ignores us,” says the electrical engineer. Among the personal things he has lost, there is one he misses most:

“They tore up my son’s school diploma, probably because it read ‘the Green School of Bani Walid'” – green is the colour of the former government- says Saleh, who is seriously thinking of retaking his former position as a professor at the University of Manchester in England.

“Our city has been shelled by NATO and assaulted by militias coming from all parts of Libya,” complains Saleh. “They call this ‘liberation’? To me this is nothing but a blatant occupation”.