TRIPOLI, Nov 1 2011 (IPS) - “A crossroads of history, continents and ancient empires; a place where history comes alive through the extraordinary monuments on its shores”, reads a well- known tourist guidebook about Libya. It’s all still there, but the tourists aren’t there to see it. 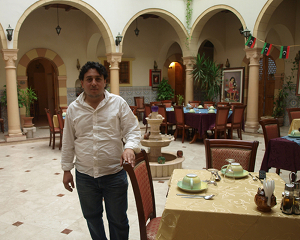 Life in Tripoli has almost come back to normal and there is no shooting except for celebration. The street restaurants are as busy as they used to be, like the barber shops, the bakeries. The terrace of a brand new cafeteria that opened recently in Tripoli’s old town has turned into the local youngsters’ favourite spot.

But the booming atmosphere couldn’t be more different just a few metres away from where the locals sit in the shade for hours taking small sips of cappuccino and big pieces of cake.

“I just keep the shop open in case any of you (journalists) wants to buy one of these postcards,” Muhamed Bariani tells IPS. The 45-year-old shopkeeper has known better times. His is not a product any local would buy.

For the last two months only a handful of journalists has entered his shop – and the number of foreign correspondents in the country’s capital is decreasing by the day.

“Now that the war is over and Gaddafi buried, I doubt I’ll come across any other customer for the rest of the week,” laments Bariani. He says he’s considering closing his shop, which is just opposite the arch of Roman emperor Marcus Aurelius.

“We live on the restaurant, otherwise we wouldn’t be open by now,” Habib Dwek at the reception desk says. Just a few months ago he would barely have had a minute to share with us.

“We used to be full,” recalls Dwek over a cup of strong Arabic coffee. “A new group would come every week and they would gaze in awe at our fine Roman monuments. Did you know that nowhere else are they as well preserved as in Libya?”

Daily life, though, included duties other than the regular check in and out, or useful tourist tips.

“We had to report on every group to the police, especially in the case of American and British tourists,” says Dwek. “Police would often show up during lunch or dinner time to double-check that we were not fooling them.”

Apparently, there was no such thing as “independent travel” during Gaddafi’s times.

“You would be escorted by the tourism police from the time you set foot in Libya until the day you left,” recalls Izmail Eluonsi, who has been running the Echo Libya tourist agency for years.

“If any tourist left the group at some point, the agency would be in deep trouble. In fact, several colleagues were forced to fold because of that,” he says.

The company’s tourism programme looks most appealing. “We used to run two different 11-day trips: the first and most popular was the archaeological sites in the north. The second was an adventure trip to the Sahara desert in a 4X4,” says Eluonsi, whose former customers have been replaced today by businessmen looking for deals in gas and uranium.

The austere but imposing building hosting the General Authority of Tourism and Handcraft – the closest thing to a ministry of tourism the new Libyan authorities have – is far from appealing, unless you have an interest in Soviet architecture.

From a desk with a view to Tripoli’s increasingly busy harbour, Mohamed Fakron, director of international cooperation, talks about the complex times of old.

“Gaddafi was always changing policies: one day we would have a ministry of tourism and the following one it would turn into a general directorate of tourism,” says Fakron, who might be minister if the new authorities had a ministry.

“Libya boasts deserts, mountains and five UNESCO protected sights at the throw of a stone from Europe, but Gaddafi kept the country closed to tourists until 1990,” says Fakron. The senior official adds that key issues for the future of the sector are improvement of infrastructure and, immediately, security after the nine-month war.

“I think we will be able to guarantee safety all around the country by the beginning of 2012,” the official tells IPS.

As almost everyday for the last two months, crowds waving the pre- and post-Gaddafi Libyan flag rejoice in their thousands at noon in Tripoli’s Martyrs’ square.

Aduli is confident he will get back his former job and share Libya’s treasures with all willing to see them. But that, he says, won’t be tomorrow.

“Rebuilding the whole country and removing the debris is not such a big deal,” says Aduli in flawless English. “The problem is that tourism is a very sensitive sector. I’m sure it will take at least five years to convince potential tourists that Libya is a safe country to travel in.” He heads out to the restaurant where he plans to work until his future customers get reassured about visiting Libya.