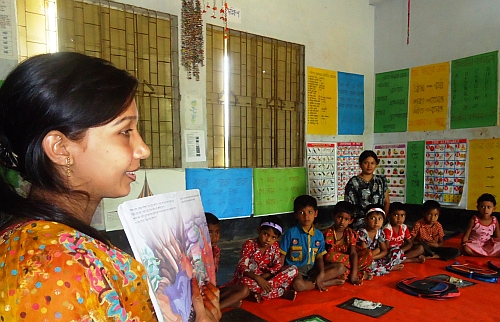 DHAKA, May 1 2012 (IPS) - Bangladesh continues to score good grades in achieving the Millennium Development Goal (MDG) of gender parity in education by 2015, with the trend of more girls than boys attending primary school accelerating this year.

Early estimates for the accounting year that ended March show an enrolment ratio of 52:48 favouring girls, which is consistent with the trend since 2010 when girls overtook boys in primary school enrolment.

Hiring female teachers, involving non-government organisations (NGOs), and paying out cash subsidies are among interventions that helped turn around the situation of a decade ago when schooling for girls was unthinkable in parts of Bangladesh because of social and religious barriers.

Since 2000, the MoPME has been implementing a policy of hiring women as primary school teachers, and currently 90 percent of the 182,000 teachers in Bangladesh’s 37,500 primary schools are female. Also, 95 percent of school management committees are headed by women.

“Classrooms run by female teachers created an environment for girls to attend schools,” said Aziz-ur-Rashid, headmaster of a primary school in Niphamari district. “The retention rate increased remarkably as a result.”

The primary education stipend project (PESP), funded by the World Bank, the Asian Development Bank and the Norwegian government, was aimed at increasing enrolment, attendance, retention and performance of primary school-aged children from poor families.

PESP money is deposited directly into individual bank accounts every six months. The monthly stipend varies from Taka 25 (three cents) for a student of class VI to Taka 60 (seven cents) for a class X student.

In addition, every candidate appearing for secondary school certificate final examination is entitled to six dollars to cover examination fees.

Wherever state-run institutions could not take up the challenge of enrolling and retaining girls in school, NGOs stepped in to help the children in the ‘dropped out, left out or missed out’ categories, especially in the remote, hilly or wetland areas.

“There is tremendous enthusiasm among rural children to attend classes, some riding boats to attend classes,” says Humayun Kabir Selim, director of Palli Bikash Kendra, an NGO that operates 10 primary schools in the vast wetland areas of Mithamoin in Kishoreganj district.

NGO-run schools have good instructional material, trained and motivated teachers and, most importantly, the flexibility to conform to the needs and capacities of the community. NGO-run primary schools often operate out of one-room houses made available by grateful local communities.

“The flexibility makes for better attendance as children do not have to walk distances as is the case with many state-run primary schools,” said Waheeda Mahmud, a primary school teacher with a local NGO in the Nachol sub-district in Chaipainawabganj district.

“Parents feel safer when the school is located around the corner. They also consider female teachers to have more patience,” said Samsun Nahar Lina, who heads ‘Shakkor’ an NGO that runs several free primary schools in Rangpur district, 370 km from Dhaka.

Ten-year-old Aireen Akhtar was ‘left out’ until two years ago when determined advocacy persuaded her parents to send her to a nearby NGO-run school in the Charpara village of Mithamoin sub-district, about 130 km from Dhaka.

Says Aireen, a shy but confident pupil in a class of 12 girls and seven boys: “Every day we learn something new. It’s fun. There is no fixed timetable for classes and there is no homework.”

BRAC began implementing NFPE in 1985 with its one-classroom schools and selecting and training female teachers from the local community.

Shafiqul Islam, head of BRAC’s education programme, told IPS: “A lot of children come from poor rural families and are into income-generating activities.

“The rigidity and inflexibility of the formal education system had put education beyond the reach of these children… flexible school timings are key to our success.”

Since 1985, BRAC has set up 38,000 non-formal schools in 470 sub-districts. Over 1.2 million children (70 percent of them girls) attend BRAC schools, forming the largest private school chain in the world.

CAMPE, a coalition of more than 1,300 NGOs, works to achieve MDG 2 and MDG 3 by implementing quality education through advocacy and capacity building. These are part of the eight goals defined by the United Nations to be met by 2015.

While MDG 2 demands that all children complete a full course of primary schooling by that year, MDG 3 calls for the elimination of gender disparity in primary, secondary and tertiary education.

There are now 16,539,363 students studying in 81,000 primary schools in Bangladesh, including those run by NGOs, communities and madrassas (religious schools).

Stefan Priesner, country director of United Nations Development Programme in Bangladesh, told IPS: “In general, progress has been sound. Indeed, on many MDGs, including expanding education, Bangladesh has either exceeded or is well on track to achieve the goal by 2015.”