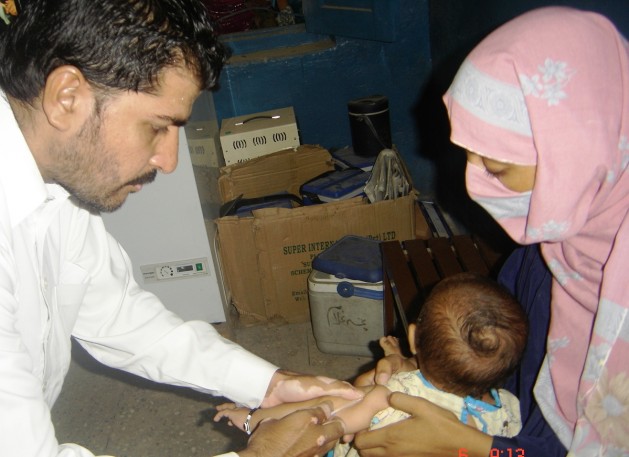 A child gets a measles shot at the Jalozai refugee camp. Credit: Ashfaq Yusufzai/IPS

PESHAWAR, Pakistan, Aug 14 2012 (IPS) - Measles outbreaks, which have killed at least 100 children in Pakistan’s militancy-hit border areas since May, have prompted calls by experts for better cooperation in territories adjacent to Afghanistan with international immunisation campaigns.

“The latest victims of this paediatric disease are children in the Mohmand Agency of the Federally Administered Tribal Areas (FATA) where nine deaths have been confirmed as a result of non-vaccination,” Dr. Anwar Shah, top health officer in the agency, told IPS.

Shah blamed unsettled conditions caused by Taliban militancy as well as poor public awareness of the value of vaccination for the outbreak of measles in the seven agencies and six border regions that make up the FATA and in adjacent Khyber Pakhtunkhwa province.

“My eight-year-old son died of measles last month. He hadn’t been immunised,” Amir Rehman, a farmer in the Lakaro area of Mohmand Agency, told IPS over telephone.

Rehman said he had to take his three surviving children to Charsadda, one of the 25 districts of Khyber Pakhtunkhwa, to have them vaccinated against measles.

In FATA’s North Waziristan, where the outlawed Tehreek Taliban Pakistan group banned oral polio vaccination (OPV) in June, an estimated 163,000 children are said to be exposed to poliomyelitis.

The result of the ban on OPV is that the FATA is now the only polio-endemic region in the world that harbours two strains of poliovirus, posing a threat to countries certified polio-free, according to the World Health Organisation (WHO) officials.

According to Asghar Ali, a WHO doctor, most of the FATA’s seven agencies have less than 45 percent vaccination coverage against the national target of 95 percent set by the ‘Prime Minister’s Emergency Polio Eradication Plan 2012’.

The situation is worst in the South Waziristan agency where the Taliban has ordered a ban on all vaccinations, leaving the children vulnerable not only to polio but also to measles and other infectious diseases.

On Jul. 31, South Waziristan’s chief surgeon Azmat Hayat Khan issued a warning that the Taliban’s blanket ban could result in a measles outbreak and more deaths. “The problem is complex because apart from the ban on vaccination there is a shortage of vaccines,” Khan told IPS.

“Measles-affected children need to be admitted to hospital within 24 hours and this is not possible in the tribal areas where people lack transport or resources to move their children to facilities in KP,” Khan said.

Khan said that besides the 100-odd children known to have died of measles since May about 3,000 have been treated in hospitals.

“When unvaccinated children get measles, they need to be rushed to hospitals if they are to survive,” Muhammad Aman, a pediatrician at the Khyber Teaching Hospital in Peshawar, told IPS.

Dr. Jan Baz Afridi, top immunisation officer in KP, told IPS that additional vaccinators were being deployed in KP districts. “Our staff now visits villages and makes announcements from mosques over loudspeakers to encourage people to get all children up to 15 years of age immunised,” he said.

Fawad Khan, FATA’s chief health director, said: “Law and order is another problem hampering the government’s effort to promote vaccination. We are looking to the government to ensure security of the health workers to carry out immunisation activities.”

“Vaccine-preventable ailments do not discriminate between cultures, religions, borders or language,” Michael Coleman, communications specialist with the United Nations Children’s Fund (UNICEF), told IPS. “A small number of unvaccinated children could put at the razor’s edge the lives of thousands of children.”

In April, UNICEF joined WHO and the Centres for Disease Control and Prevention of the United States in launching a global strategy to reduce measles deaths to zero by 2015.

But the new strategy relies on high vaccination coverage and close monitoring of the spread of measles as well as rubella, using laboratory-backed surveillance and effective communication – grossly lacking in the FATA.

Studies by the WHO, published in April, showed that accelerated efforts to reduce measles deaths had resulted in a 74 percent reduction in global measles mortality, from an estimated 535,300 deaths in 2000 to 139,300 in 2010.

The WHO study estimated that during the 2000-2010 period, measles vaccine had saved over 9.6 million children.

“Since April, we have immunised 8,000 children against measles in the Jalozai refugee camp (outside Peshawar), where people displaced by military action against the Taliban in FATA are lodged,” WHO’s Dr. Junaid Shah told IPS. “It is much harder to immunise children in the FATA.”

Shah said that propaganda by the Taliban against oral polio vaccine had not only harmed the immunisation efforts in the FATA but was now proving to be a setback to global efforts to reduce deaths from measles.