TORONTO, Oct 18 2012 (IPS) - In the late afternoon of Apr. 3, 2011, in the Pakistani city of Dera Ghazi Khan, an annual Sufi Muslim religious festival at the shrine of the 13th century saint Ahmed Sultan was hit by twin suicide bomb attacks which killed over 50 people and left more than 120 wounded.

As an eyewitness described the immediate aftermath of the bombings, “people started running outside the shrine. Women and children were crying and screaming. It was like hell”.

The bombers had struck a few minutes apart, instantly turning the atmosphere of festivity and prayer into a scene of carnage and horror. As crowds of worshippers fled in terror, an elderly woman ran into a young boy out of whose hands dropped a grenade. His name was Umar Fidai, a 15-year-old, and he was the third intended suicide bomber that day.

Fidai’s explosive vest had failed to detonate and as his handlers had instructed, he was attempting to kill himself and as many others as possible with the grenade they had provided him as a backup. 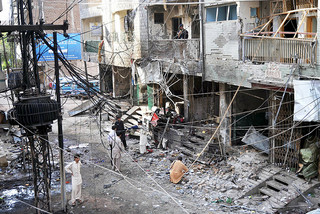 The Taliban denied responsibility for this 2011 attack in Pakistan. Credit: Ashfaq Yusufzai/IPS

In his own words in an interview later given to the Pakistani media, “There were three policemen standing close by, and I thought if I killed them too, I would still make it to heaven… At the time I detonated myself, thoughts of my family were not in my mind, I was only thinking about what the Taliban had told me.”

Fidai was shot and wounded by police and failed in his mission. But he is only one of the hundreds of other children that the Pakistani Taliban (TTP) are believed to have brainwashed and utilised as suicide bombers in their ongoing war with the state.

Most are impressionable children from poor families who are indoctrinated through networks of religious schools which provide the only hope of advancement in isolated regions poorly served by the Pakistani government – although many are also procured through outright kidnapping and coercion by armed gangs.

Once in the hands of the TTP, the brainwashing of these sheltered, naive and suggestible young people for the organisation’s military goals proceeds. In Fidai’s words, “I thought that there would be a little bit of pain, but then I would be in heaven.”

A significant majority of suicide bombers in Pakistan are believed to be between the ages of 12 and 18, with some studies putting the number near 90 percent. Pakistani Taliban commander Qari Hussain has boasted that his organisation recruits children as young as five years old for suicide attacks, saying that “Children are tools to achieve God’s will, whatever comes your way you sacrifice it.”

There are an estimated 2,000 madrassas in the border regions of Afghanistan and Pakistan, a small yet significant percentage of which are believed to be involved in the brainwashing and indoctrination of young boys into militancy.

Students in these schools receive free board and education, something which on its face appears to be a remarkable opportunity for poor and isolated children whose parents cannot afford to send them to good schools, but which ultimately comes at a terrible price to both them and Pakistani society.

In one high-profile incident in early 2012, a convoy of cars carrying children, some as young as six, was intercepted while it was en route to religious schools where the children were allegedly to be trained as suicide bombers – the rationale for their utilisation being that they were “gullible” as well as less likely to be physically searched by police at checkpoints.

In a recent study by Hussain Nadim for the Islamabad-based National University of Science and Technology, several interviews were conducted with rescued child suicide bombers whom he described as being “not particularly religious, nor motivated by supposedly Islamic ideas, and (who) had no substantial animosity toward the United States or the Pakistan Army – they knew very little about the world outside their small tribe…

“The lack of access to TV, Internet, and formal education meant they were almost completely oblivious to such massive events as 9/11, and as such they were unaware of where and what exactly the United States was.”

In this context, such isolated and impressionable young people were highly susceptible to intensive brainwashing by Taliban militants who would make young recruits spend weeks watching videos of atrocities and of foreign troops raping women and girls – a fate which they said would await their own female relatives if they did not carry out suicide operations against Western and Pakistani government targets on behalf of the TTP.

‘Fear of losing mothers and sisters’

Furthermore, Nadim’s study concluded that most residents of the tribal areas where the Pakistani Taliban operate had little understanding or knowledge of the “War on Terror” being fought in their region, and were themselves allies of neither the Taliban, the West, or the Pakistani government.

Those young people who have agreed to take part in suicide bombings have in many cases done so particularly “out of fear of losing mothers and sisters” – a fear impressed upon them by their militant handlers’ extensive psychological manipulation.

Unbeknownst to them when they enrol their children in what are ostensibly religious schools, parents are denied access to their children once in the hands of the Taliban – a separation which is coercively enforced when parents realise that their young sons are being indoctrinated by their religious teachers in preparation for militant operations.

One parent described how he repeatedly pleaded with the Taliban to return his child but was denied. “We were threatened and told that the kids were working for a noble cause,” he said.

Cut off from parental contact, young, isolated children are easily susceptible to the influence of surrogate authority figures such as religious clerics in their madrassas. Many are told that they are acting in the name of Islam and will receive the reward of heaven if they successfully carry out their missions.

Studies of those rescued have also shown that most suffer from physical injuries, nightmares and trauma. Indicative of the cynicism with which they are exploited by militant organisations that see them as expendable, child suicide bombers are often sold to other groups and individuals wishing to carry out attacks for prices starting at 7,000 dollars – a grotesque financial utilisation of manipulated children by armed gangs.

In the words of Lahore-based researcher and psychologist Anees Khan, “These young boys are as much the victims of terrorism as those they kill. They are victims of the most brutal exploitation.”

Umar Fidai, despite losing his arm and suffering extensive burns to his body, is glad that he survived and did not successfully carry out his bombing mission.

After he was made to understand the true nature of the acts he was carrying out and the mainstream Islamic perspective, which stands unequivocally against both suicide and the murder of innocent civilians, he said to a Pakistani reporter from his hospital bed: “I am so grateful, because at least I have been saved from going to hell.

“I am in a lot of pain, but I know there are many people in hospital even more severely injured than me and I am so sorry for what I did… I now realise suicide bombing is un-Islamic… I hope people will forgive me.”

*Murtaza Hussain is a Toronto-based writer and analyst focused on issues related to Middle Eastern politics.

Published under an agreement with Al Jazeera. The views expressed in this article are the author’s own and do not necessarily represent the editorial policy of Al Jazeera or IPS.