PESHAWAR, Jan 4 2012 (IPS) - Suicide bombing is down, bomb attacks are fewer, but the Taliban are keeping up attacks on girls’ schools. In retaliation, a growing number of girls are going for school education – without school buildings. 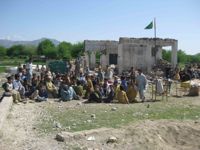 The Higher Secondary School at Kumbar (in the Khyber Pakhtunkhwa area of northern Pakistan) is one such school that has yet to be repaired after it was damaged heavily in a bomb explosion in May 2009.

“While temporarily residing in a camp in Mardan due to the military operation, we heard bad news that our school has been destroyed by the Taliban,” says Kulsoom Bibi, a ninth class student at the Government Girls High School at the local Timergara Dir district. “Despite the passage of two years it has not been repaired.”

The good news is that the girls pursue their studies without the school building.

“The Taliban have deep enmity with education because suicide and bomb attacks have stopped. Over the past one month, the law and order situation has showed signs of improvement, but attacks on schools continue, “says Pervaiz Khan, education officer in Charsadda district of the Khyber Pakhtunkhwa area. Two schools were blown up here on Dec. 21.

In the past one month, 13 schools in Mohmand, Khyber and Orakzai Agency of the Federally Administered Tribal Areas (FATA) and in Mardan, Charsadda and Peshawar have been dynamited.

Since 2006, about 33 schools have been blown up by militants in Dir, one of 25 districts in Khyber Pakhtunkhwa, executive district officer Khursheed Ali tells IPS. “Reconstruction of only 11 schools is in progress as the cash-strapped government could not allocate more amount to rebuild all the damaged institutions.”

School principal Ayesha Bibi says the students are still gripped by fear. “The Taliban’s campaign against schools has left about 3,000 students without education. The government has provided 20 tents to provide education to those students,” she tells IPS.

The Taliban say they are targeting a certain kind of education. “We are not against education, but these schools are the source of modern and liberal education which Islam doesn’t allow,” Ihsanullah Ihsan, spokesman for the outlawed Tehreek Taliban tells IPS over telephone from an undisclosed location. Ihsan says the Taliban will continue to blow up schools.

Pervez Khan, assistant director for education in Khyber Pakhtunkhwa says that 755 schools have been destroyed in the province and 296 in the adjacent FATA.

“There is no stopping, and lately the campaign has been extended to Mardan, Charsadda, Swabi, Nowshera and Peshawar districts. Earlier, these districts were regarded safe.”

On Nov. 22, the Taliban planted a bomb outside the Government Girls High School in Shah Dand Mardan. The bomb went off while the police were trying to defuse it. “Had it exploded a bit later, it would have killed dozens of arriving students,” says Khan.

School principal Lal Baha says they had received a letter from Taliban three months earlier, asking them to make it obligatory for the students to wear the veil. “Since then, the majority of our 1,000 students wore the veil.”

Several students tell IPS of their determination to carry on. “If we stop coming to school it would fulfill the long-cherished dream of the Taliban,” says Kausar Bibi (16) from the Government High School on Mardan.

“Why are the Taliban destroying schools? Islam calls for promotion of male and female education, but the Taliban are doing the opposite of what our religion Islam has ordered.”

The girl students of another eight-room school destroyed by militants in January this year in Khyber Agency are upbeat. “Our school is without ceiling, furniture and other educational facilities, but still we are pursuing education,” says Gul Ghutai (9), a third grader in the school.

Students at the Government Girls’ High School in Domail in Bannu district in FATA are unsure when the authorities will begin reconstruction at their school damaged in September last year.

“More than 800 girls are studying in the school on mats which the students have bought from home,” says Zar Pari, a teacher at the school.

“It is difficult for us to listen properly to our teacher due to crowded class, and it is hard to sit in class in the summer, but there is no other way,” says student Mushtari Begum.

Fourth grade student Shahana Imran at the Government Girls High School in Regi village in Peshawar says she took science to become a doctor but there is no science equipment in the school. “When we went to school on Apr. 23, we found only debris because it had been blown up early morning.”

“We have started reconstruction of 127 schools in Swat where militants destroyed a total of 255 schools between 2007 and 2009,” he says. The government has meanwhile set up village committees to safeguard schools.

Not all students get even minimal education. Saeeda Bibi, a seventh class student in Lakki Marwat in Khyber Pakhtunkhwa says that like about 200 students there she does not go to school because the building was blown up in May this year.

“The government gives assistance in rebuilding the school but time is running out and there seem no prospects in the foreseeable future.”