The Dark Side - IPSs Coverage of Terrorism 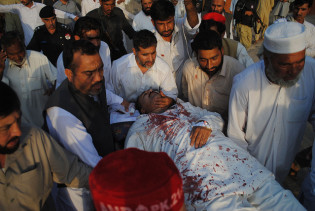 By Ahmed Usman
Locals in the city of Maiduguri in the northeastern Nigerian state of Borno have intensified their calls for the military to withdraw from the town, the stronghold of the Islamist extremist group Boko Haram, after claims that they are being maltreated and abused.

By Gareth Porter
The U.S. Treasury Department's claim of a "secret deal" between Iran and Al-Qaeda, which had become a key argument by right-wing activists who support war against Iran, has been discredited by former intelligence officials in the wake of publication of documents from Osama bin Laden's files revealing a high level of antagonism between Al-Qaeda and Iran.

By Gareth Porter
The optics surrounding the Barack Obama administration's "Enduring Strategic Partnership" agreement with Afghanistan and the Memorandums of Understanding accompanying it emphasise transition to Afghan responsibility and an end to U.S. war.

By Jim Lobe
Even as President Barack Obama touts his progress in extracting the U.S. from wars in Iraq and Afghanistan, his administration appears to be deepening its covert and military involvement in strife-torn Yemen.

By Jim Lobe
Sunday's well-orchestrated - if unsuccessful - attacks by Taliban forces on Kabul and three provincial capitals in eastern Afghanistan could further shake ebbing public confidence in the U.S. and its allies that their strategy for securing Afghanistan is working.

By David Elkins
A new report released by Human Rights Watch (HRW) Friday contends that the dearth of meaningful reform in the protection of human rights and the rule of law in Yemen threatens political stability as the fledgling transitional government copes with a deteriorating economy and continued violence.

To Hell With Suicide Bombers, Not Heaven

By Ashfaq Yusufzai
Suicide bombers act in the name of Islam – but clerics deny them even last rites over such killing of others and themselves that they see as un-Islamic.

By Correspondents
Ilker Basbug, Turkey's former army chief, has gone on trial on charges of leading a terrorist group accused of plotting to overthrow the government of Prime Minister Recep Tayyip Erdogan.

By A. D. McKenzie
"The murderer is gone, and now it’s us who will have to live with the consequences." That’s how a Muslim shopkeeper summed up for IPS the death and legacy of the man suspected of murdering seven people in three separate attacks in France.

By IPS Correspondents
The increasing influence of a conservative circle within President Hamid Karzai's palace has impeded progress in signing a crucial strategic agreement with the U.S. to chart the relationship beyond 2014, officials and analysts have said.

By Jim Lobe
While U.S. officials insisted their counterinsurgency strategy is still working, Sunday's pre-dawn massacre by a U.S. staff sergeant of 16 people, including nine children, in their homes in Kandahar province has dealt yet another body blow to Washington's hopes to sustain a significant military presence in Afghanistan after 2014.

By David Elkins
Two days after U.S. Attorney General Eric Holder outlined the statutory justifications for "targeted killings", civil liberties groups here continue to question the legality of the Obama administration's policy, particularly as it applies to the rights and very lives of both U.S. citizens and foreign nationals.
Next Page »
ADVERTISEMENT ADVERTISEMENT