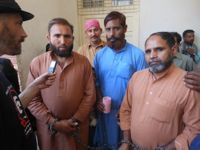 The representatives of power loom workers – namely Akbar Ali Kamboh, Babar Shafiq Randhawa, Fazal Elahi, Rana Riaz, Muhammad Aslam Malik and Asghar Ansari – were charged with attacking a factory, injuring its owners and burning it down on Jul. 20, 2010, charges that all six individuals have denied.

Still, police were forced to add clauses from anti-terror laws to the report and the court ruled based on evidence and witnesses made available by the complainants, and now the labour activists are languishing behind bars.

The Lahore High Court (LHC) accepted an appeal against their conviction but so far no hearing date has been announced.

To keep the issue in the public eye, the Labour Party of Pakistan (LPP) organised a lecture at the prestigious Lahore University of Management Sciences (LUMS) on Apr. 16 to present the details of the case to a larger audience.

Meanwhile, the Labour Qaumi Movement (LQM), the party to which the jailed leaders belong, is gearing up for a massive rally in Faisalabad on May 1 to demand that the case be repealed.

In actual fact, the six unionists were not terrorists but leaders of the LQM-sponsored strike involving roughly 100,000 power loom workers who were demanding a 17 percent wage hike, says Farooq Tariq, spokesman for the LPP.

He claims only a godown of the said factory was purposely burnt (some allege by the factory owners themselves) to teach the striking workers a lesson.

Still, it was the workers who were arrested, supposedly for indiscriminate firing to create fear, destroying public property and kidnapping people for ransom, all acts punishable under anti-terrorism laws in Pakistan.

“The message was clear: if this can happen with LQM leaders, anyone daring to assume this role in future must be ready for similar treatment,” Tariq said.

He laments the fact that dictators, the ruling elite, feudal lords and a host of other actors are manipulating the country’s anti-terror laws with impunity to silence voices of dissent, target groups demanding their rights and punish rivals in politics.

Thousands of lawyers were arrested for terrorism charges during former president Pervez Musharraf’s regime for participating in the movement for restoration of the judiciary, Tariq said, adding, “I myself was booked under terrorism charges four times just for organising protests. Today, I stand cleared in all of them.”

Families of the jailed leaders are in distress and LPP is raising 5,000 rupees (about 55 dollars) per month for each family’s sustenance.

The power looms sector in Faisalabad city, also known as the Manchester of Pakistan, is the backbone of the country’s economy, which is overwhelmingly dependent on the textiles sector.

Workers operating these units are paid per ‘pick’, a unit of measurement for the cloth produced, rather than a fixed wage, explained Anis-ul-Haq, spokesman for the All Pakistan Textile Mills Association (APTMA).

He said the situation worsens when there is no electricity to power the looms for 14-16 hours each day, meaning zero income for the workers.

This sector cannot afford to make alternative arrangements, like captive power plants and generators, for the simple reason that a typical power loom owner has as many as four to eight power looms at his disposal.

The prolonged electricity load-shedding and inflation has a lot to do with protests organised by workers, claims Rana Tahir, Faisalabad president of LQM. He condemned the labour leaders’ harsh sentence, saying power loom owners and political leaders prepared this ploy to weaken LQM, which had supported an LPP candidate in by-elections for a provincial assembly seat in April 2010.

Tahir challenged the contents of the First Information Report (FIR) registered against the six leaders and clarified that, in fact, guards at the factory shot at protesters first.

The demonstrators’ subsequent reaction caused a bullet to hit a nearby motorbike, sparking “a fire that spread and burnt the cloth lying in the godown.”

Tahir also told IPS that it took police three days to add anti-terror clauses to the complaint, while the factory allegedly burnt by the accused took almost the same time to start fully functioning again. “Doesn’t this show things are doubtful?” he asked.

Akram Ghauri, chairman of the All Pakistan Cotton Power Looms Association, is not convinced by this version of events and has no sympathy for the jailed labour leaders.

“What they did to the factory and its owners is worth condemnation,” he said, calling the leaders blackmailers who effectively held power loom owners and workers hostage by refusing to agree to any proposals.

Ghauri says LQM even threatened workers willing to work on weekends for wages 50 percent higher than those offered during weekdays.

“Now we are in peace, and hold talks with the genuine labour body – the Workers Union of Faisalabad – whenever required.”

Despite his reaction, the registration of a case against the unionists under anti-terrorism law is a phenomenon backed by little public support.

Zulfiqar Shah, joint director of the Pakistan Institute for Labour Education and Research (PILER) believes commercial and industrial disputes should be decided in appropriate fora.

He believes there were certain circumstances that led to the clash between Faisalabad workers and the factory owners and the strike was not a premeditated move.

Now, the same anti-terror laws are being invoked in the case of protesting power loom workers in the port city of Karachi. Shah told IPS the only difference is that these workers have been booked under extortion charges.

Human Rights Commission of Pakistan (HRCP) Director I A Rehman has also condemned the misuse of anti-terror laws against labourers and the administration of such a severe punishment.

Even hardened criminals involved in heinous crimes have never been awarded such severe punishments, he said, and urges the state to give people their constitutional right under Article 17 of the Constitution of Pakistan, which promises, “Every citizen shall have the right to form associations or unions subject to any reasonable restrictions imposed by law in the interest of sovereignty or integrity of Pakistan, public order or morality.”