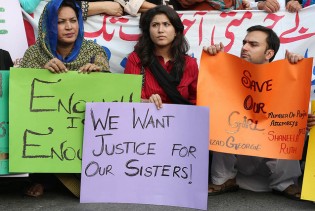 By Irfan Ahmed
For 70-year-old Ghulam Fatima, the upcoming general elections on May 11 promise to be unlike any she has witnessed before in Pakistan.

By Irfan Ahmed
Younas Gill, a self-employed tax accountant, sits on the pavement in Joseph Colony, Lahore, staring at the place where, until about a month ago, his home had stood.

By Irfan Ahmed
One does not always need a time machine to travel into the past – a visit to a typical brick kiln in Pakistan’s Punjab province is enough to evoke a time when human beings were traded like animals and slavery was rampant.

By Irfan Ahmed
At a time when spiraling input costs and perennial shortages of irrigation water are breaking countless farmers’ backs, a small village community on the outskirts of Lahore appears to have been spared.

By Irfan Ahmed
A knock on her front door throws Beenish, a 28-year-old housewife from Lahore, into a fix: should she allow the female volunteer vaccinators to administer the oral polio vaccine (OPV) to her two-year-old son, or not?
ADVERTISEMENT ADVERTISEMENT