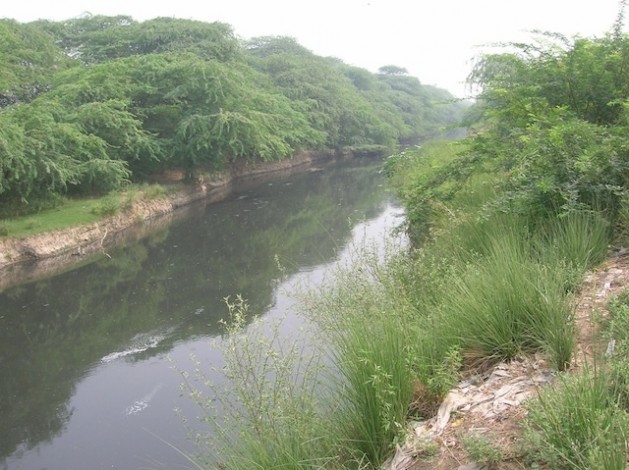 Hudiara drain winds through thick foliage of shrubs and trees, in the border village of Burki. Credit: Irfan Ahmed/IPS

LAHORE, Jul 25 2012 (IPS) - At a time when spiraling input costs and perennial shortages of irrigation water are breaking countless farmers’ backs, a small village community on the outskirts of Lahore appears to have been spared.

The village of Hudiara, situated close to the Wagah border, falls in the way of a natural storm water channel called the Hudiara Drain, which originates in Batala in India’s Gurdaspur District and flows for nearly 55 kilometres before entering Pakistan.

The farmers here say the drain ensures them of year-round irrigation. What they won’t tell you – either because they don’t know it, or refuse to believe it – is that the water is poisoned.

Hundreds of factories located along the length of the canal dispose of their untreated industrial waste into it. This includes discharge from textile processing and dyeing units, carpet industries, tanneries, dairy plants, food, beverage and oil processing plants and ghee production units.

Municipal wastes are added along the way and the water that finally flows out of farmers’ pumps and into their fields is a toxic cocktail of pollutants.

Farmers and the local municipality are now locked in a fierce battle – with farmers ignoring countless warnings and taboos on the use of the water to irrigate farmland.

“The water is free, its supply regular and its ingredients strong enough to replace fertilisers. Only a fool will reject this deal,” Amanat Ali, a vegetable farmer who distributes his produce to the large population in Lahore, told IPS.

He is not worried about the toxic impact of heavy metals in this water.

“Flowing water can never be harmful; it’s the stagnant water that’s bad,” he said confidently when asked about the effects of the water on his agricultural produce and its consumers.

It is unsurprising that farmers are reluctant to heed official warnings. Less rainfall and the never-ending construction of roads and housing projects are exhausting ground water supplies, according to Dr. Muhammad Yaseen, associate professor of soil fertility and plant nutrition at the University of Agriculture in Faisalabad.

Yaseen, co-author of a report on heavy metals and their uptake by vegetables in adjoining areas of Hudiara, told IPS very little has been done at the government level to improve the situation in the village.

His team declared the drain water suitable for irrigation only during the monsoon, when rainwater dilutes the effluents to safe levels.

Though the report was released in 2009, farmers continue to use the water for irrigation all year round.

Brinjals and spinach samples from the village contained iron in higher concentration than the stated guidelines. Nickel content in all the crops except for brinjals were higher than prescribed levels. Cadmium concentration in almost all the plants exceeded the safe limit.

According to the report, food crops quickly absorb cadmium, which is one of the reasons why vegetables grown in Hudiara are oversized.

Naseem-ur-Rehman Shah, director of the Environmental Impact Assessment (EIA) of the Punjab Environment Protection Department (EPD) told IPS the irrigation department is about to start a process of lining Hudiara Drain to stop seepage of toxic water into the ground.

He said this process was of the utmost importance since locals are in the habit of drilling for subsurface drinking water, leading to the spread of waterborne diseases such as hepatitis and diarhhoea.

Environmentalist Ahmed Rafay Alam told IPS that according to the findings of another study, the drain contains extremely low levels of oxygen and cannot support any form of aquatic life.

Citing an investigative study conducted by the World Wildlife Fund in Pakistan nearly a decade ago, MUAWIN, a community organisation in Lahore, reported that, “the rate of abdominal pains, paralysis of limbs, joint pains and prevalence of arsenic toxicity and eye infection was greater in the respondents of a village along Hudiara Drain.” 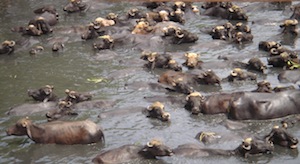 “Domestic animals like cows and buffaloes are also seen wallowing and watering in the wastewater drains thus increasing the risk of water pollutants, mainly heavy metals, (entering) our food chain through the consumption of milk and meat of these animals.”

More than ten years later, experts are agreed that the situation today is much worse.

Furthermore, environmentalists fear that the drain, which eventually empties into the River Ravi after travelling 63 kilometres through Pakistani territory, will also poison the river with toxic elements.

Rafay, who is currently vice president of the Pakistan Environmental Law Association (PELA), says industries situated along the canal should take concrete steps towards reducing pollution rather than push the burden onto the farmers.

“All these sectors need different technologies to treat their effluents and must install plants immediately,” he stressed.

Water at any cost

Though the practice has been going on for years, the government has only made a few half-hearted attempts to change farmers’ behaviour before eventually surrendering to powerful industrialists.

Former Punjab chief minister Pervez Elahi ordered the closure of over 100 water pumps installed along Hudiara Drain in an effort to save crops and livestock but the initiative did not succeed.

“There was immense pressure from locals who feared loss of livelihood if this happened,” Raza Butt, an elected member of the local government of Lahore, told IPS.

Despite numerous studies showing that vegetables produced here contain metals in concentrations higher than prescribed levels, farmers have not heeded the warnings, he said.

Shah told IPS that the EPD has instructed all 130 industrial units along the drain to install water treatment plants without delay, which would make the water suitable for irrigation.

So far only 22 of these operations have complied, and even these were largely due to pressure from importers of their goods.

“The problem is that most (owners of industrial units) cannot afford to install these plants individually,” said Shah.

Still, he says, the burden of cleaning the environment lies with the polluter. Now, with the landmark introduction of Green Benches in Pakistan’s high courts, polluters will be forced to take environmental concerns more seriously.

Shah suggests that more industries follow the example of the 307 tanneries in Sialkot, who got together to buy a large chunk of land on which they set up a combined treatment plant.

The government provided the collective with a soft loan worth 300 million rupees (roughly 3.2 million dollars).