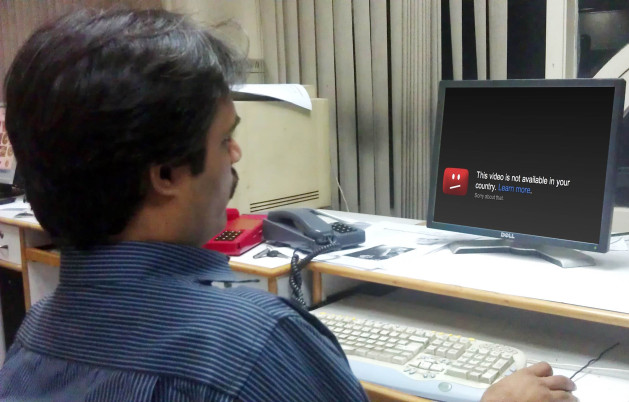 KARACHI, Oct 18 2013 (IPS) - First, it was Youtube. Now, if the government of Sindh has its way, it could well be goodbye to Skype, Whatsapp, Viber and Tango for the people of this province in southeastern Pakistan. At least for the next three months.

Part of everyday vocabulary today, apps such as Skype which use Voice over Internet Protocol (VoIP) calling services provide a fast, cheap and easy means of communication across the world. According to Pakistan Telecommunication Authority (PTA) figures, the country has 30 million internet users out of a total population of 190 million. And with 70 percent of internet users under 30, it’s not difficult to imagine how popular these apps must be in the country.

This ease of communication is coming in handy for terrorists as well, says the Pakistan People’s Party-led Sindh government. They have switched from cellphones to these apps to communicate with each other, making it difficult for law enforcers to track them, says Sindh information minister Sharjeel Memon. And the launch of a grand clean-up operation against terrorists, extortionists, criminal gangs and target killers in the port city of Karachi is being used as justification to block these services.

“Every country has such priorities. But why is it that the sword of censorship falls on our heads most of the time?”

Except that neither the internet community nor rights groups are buying the excuse. “It’s the biggest blow to the human rights and civic liberties of people,” Furhan Hussain, coordinator, advocacy and outreach at Bytes for All (B4A), an internet rights group based in Islamabad, tells IPS. He terms the move as a desperate attempt by the government to shift the blame for its failure to control crime on advanced technologies.

On Sep. 17 last year the government of Pakistan blocked public access to video-sharing website Youtube on the grounds that it had aired the trailer of a film carrying blasphemous content against the Prophet and Muslims. The government had made several attempts to block only the objectionable content, but failing to do so, it blocked the domain altogether. Meant to be a year-long ban, it is yet to be lifted.

“There is no limit to the control they exercise as they [the government] have also started blocking cellphone services for long hours,” says Muhammad Nawaz, a manufacturer of corrugated sheets in Lahore. He recalls how his nephew was seriously injured one day and the women in the house could not get in touch with the male members of the family or call for an ambulance because there was no cellphone connectivity.

On its part, the security establishment says that mobile services are blocked only when there are confirmed reports of terrorists using cellphones as detonating devices in blasts they have planned. Manzar Abbas, a security expert and former director at the country’s National Counter-Terrorism Authority (NACTA), explains how with battery life now spanning days, cellphones tied to explosive material are often placed at selected places a long time before the event actually takes place. “The suspensions are problematic,” he tells IPS, “but justified.”

What about legal sanction? Does the law permit such decisions or are they taken arbitrarily?

According to Lahore-based lawyer Hafiz Shahid, the Pakistan Telecommunications (Reorganisation) Act, 1996, does allow suspension of communication services if it is considered a risk to national security.

Likewise, he tells IPS, Article 19 of the Pakistani constitution grants freedom of speech and expression to people “subject to any reasonable restrictions imposed by law in the interest of the glory of Islam or the integrity, security or defence of Pakistan…public order, decency or morality, or in relation to contempt of court, [commission of] or incitement to an offence.”

B4A’s Hussain, however, dismisses this argument. “Every country has such priorities,” he says. “But why is it that the sword of censorship falls on our heads most of the time?”

The organisation has been fighting a consistent battle against internet censorship. For instance, in January this year, it filed a petition in the Lahore High Court challenging the blocking of Youtube, saying it was illegal, unconstitutional and inconsistent with Pakistan’s obligations under the international covenant on civil and political rights. In the same court, they are also fighting a case against the installation of URL blocking and surveillance software by the government.

The latest plan to block VoIP services is limited to Sindh province. “This is highly discriminatory,” says Muhammad Asim, a marketing professional in Karachi, the financial hub of Pakistan. He uses Skype extensively to join virtual conferences across the globe and reach potential clientele. “My competitors from other provinces and countries will definitely have a decisive edge over me if these services are blocked,” he tells IPS.

Internet censorship, he says, can range from parents looking over their children’s shoulders to track what their children are watching to governments, companies and academic institutions monitoring their stakeholders’ mail and shared digital information. Law enforcement agencies demanding information from internet service or content providers, or even seizing computers in people’s homes in pursuit of evidence of undesirable activities, also use the same justification.

“What those undesirable activities are is never told because it becomes a policy issue,” Bajwa tells IPS.

“It’s crucial at this time to raise a voice for the protection of citizens’ right to express and information,” says Bajwa. “The government has to be convinced that people too are stakeholders in such decisions.”