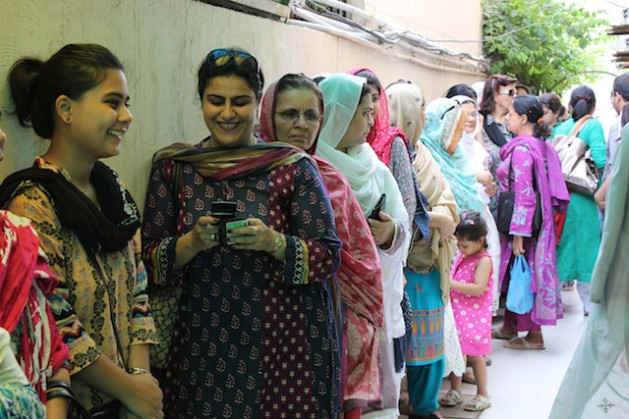 Some voters waited in line for up to eight hours to cast their ballots on May 11. Credit: Zofeen Ebrahim/IPS

With a remote control in his hand, he sat back on a soft leather sofa in the heavily guarded executive room of the party’s headquarters in Model Town, Lahore, and scanned TV channels to find the most current results.

Outside, hundreds of raucous PML-N supporters, crowded around giant screens erected for the public, cheered loudly every time a favourable result was announced.

The party and its loyalists had good reason to celebrate. Before the night was over, it was clear that the PML-N had won an overwhelming number of votes in Punjab, the country’s most populous province, which accounts for 148 out of 272 National Assembly seats.

By Monday morning, though several provinces’ votes had yet to be counted, congratulations for the prime minister-in-waiting had already come in from neighbouring India, and from Pakistan’s closest western ally, the United States.

This past weekend’s elections marked a watershed moment in Pakistan’s history. Accustomed to long periods of military rule, generally imposed via coup d’état, the country has not experienced a proper democratic transition since 1962.

This year, fears were running high that the Taliban would follow through on its May 1 warning that it would bomb all the polling stations to prove its disdain for the “system of infidels, which is called democracy.”

The lead-up to Election Day was marred by violence, with 121 people lying dead by the time campaigning closed 48 hours ahead of voting.

The caretaker government, meanwhile, dispatched over 70,000 troops onto the streets to ensure that peace and order prevailed.

The day began with a bomb blast in eastern Karachi’s Landhi area, killing 11 and injuring over 40. Despite this initial tragedy, it quickly became clear that the mood among the people was not one of violence and terror, but of enthusiasm and camaraderie.

Defying all threats by the Taliban and intimidation by armed political activists, voters came out in droves, determined to cast their ballots.

The Election Commission of Pakistan reported a voter turnout of 62 to 70 percent, the highest ever in this country of over 170 million.

Heartening sights such as a man being carried into a polling booth on a stretcher caused people to “burst out in applause,” tweeted Kamal Siddiqi, editor of the English daily ‘Express Tribune’.

Indeed, many of those out on the streets said they were casting the vote for the very first time. “I had never bothered before; but this time I am completely mobilised,” a woman in her early fifties, waiting patiently in a long queue in a school-turned-polling station in the affluent Clifton area, told IPS.

Not far away, in Karachi’s Defence Housing Authority, 48-year old homemaker Tarrannum Lakda was frustrated by the eight-hour wait to cast her vote but she refused to call it a day – she wanted her voice to be counted in this historic election, she told IPS.

Still, the voting process was not without its flaws.

As Lakda stood in the sun, the presiding election officer ventured out to inform the waiting citizens that the ballot papers, boxes, voter lists and stamps had still not arrived.

Similar hold-ups were experienced across the city. Analysts and election observers have blamed the MQM for engineering delays in a bid to deter the PTI’s urban youth base, many of them first-time voters, drawn to Khan’s condemnation of drone strikes in the country’s tribal belt and his vow to end corruption.

Various sources told IPS that pre-poll rigging had begun the night before.

“My mother is a government teacher in a school in Bufferzone (an MQM stronghold) who was appointed to report for election duty,” a youth living in the area told IPS under condition of anonymity. “But on Election Day she was informed not to report for duty as she would be replaced by someone else.”

Other anomalies included MQM members entering the Nazimabad area and confiscating students’ identity cards, or “forcing residents to vote for them”, a local student who did not want to be named told IPS.

Five religious parties – the Jamaat-i-Islami, Sunni Tehrik, Jamiat Ulema-i-Pakistan, the Sunni Ittehad Council and the Mohajir Qaumi Movement (Haqiqi) – pulled out of the race on Saturday, alluding to “irregularities and poll rigging” in Karachi. For its part, the MQM also “boycotted” the polls in a few constituencies, citing the very same reasons.

Across Pakistan, election violence claimed a total of 38 lives, with over 150 injured.

While rival parties battled it out in the southern Sindh province, and Sharif and his supporters basked in their glory in the eastern Punjab province, it was the northwestern Khyber Pakhtunkhwa (KP) province that really expressed a desire for change.

Devastated by the ongoing militancy and fed up with living under the Taliban’s boot, KP residents turned out in droves, buoyed by the presence of scores of PTI workers on the streets, monitoring the poll stations, encouraging voters to come out of their homes, and generally livening up a process that had promised to be, at best, dull and at worst deadly.

Unlike in previous election years, plenty of women were seen at polling stations in cities like Mardan and Peshawar.

By the end of the day the PTI had bagged 32 out of a total of 124 seats, becoming the largest political party in the province. Many senior politicians like ANP Chief Asfandyar Wali Khan, former KP Chief Minister Ameer Khan Hoti and former Federal Minister Ameer Madam lost to new candidates fielded by the PTI.

Though the party suffered huge defeats in Pakistan’s three other provinces and at the federal level, PTI activists flooded the streets and held processions in KP’s capital Peshawar to celebrate their victory in the north.

The climate was much less joyful in the adjacent Federally Administered Tribal Areas (FATA), where most people failed to cast votes for the region’s 12 National Assembly seats.

The PTI is now poised to form a provincial government in the violence-wracked northwest with the Jamaat-i-Islam, though Khan has announced his intention to go into opposition at a national level.

According to Al Jazeera English, Khan said Sunday that the mark of a strong democracy is a “strong opposition”, which has been missing in Pakistan for ten years.

Analysts say Pakistan must now look beyond the elections, and its prime minister-in-waiting must set his eyes on the many challenges that lie ahead, such as tackling terrorism and solving the energy crisis that has crippled the country: according to some estimates, Pakistan faces a shortfall of more than 7,000 megwatts, or 40 percent of total electricity demand.

Salman Abid, a political analyst based in Lahore, told IPS that relations with the United States and Afghanistan in the context of NATO’s withdrawal in 2014, peace talks with the Taliban, relations with India, increasing foreign investment and solving unemployment will be the new government’s priorities.

“The victory in elections may be a milestone,” he said, but the party has a long way to go before reaching its desired destination.

Tanvir Shahzad, a Lahore-based journalist, stressed that the PML-N must not fail to deliver its promises on incorporating youth into the country’s development, reducing poverty and ending load shedding.

*Irfan Ahmed contributed to this report from Lahore, Zofeen Ebrahim from Karachi and Ashfaq Yusufzai from Peshawar.