The Bloody Road to the Ballot Box 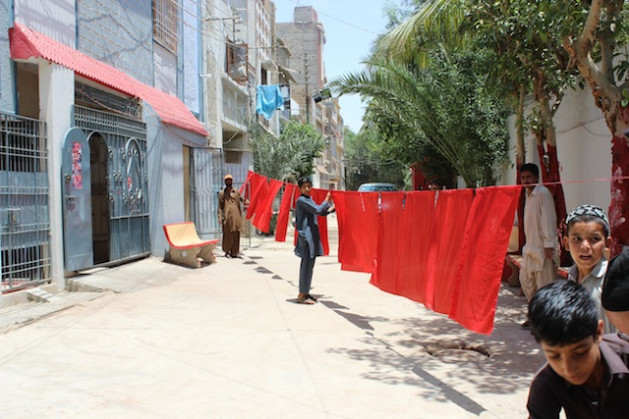 Red flags symbolising the Awami National Party (ANP) strung across the street in Karachi a day ahead of the May 11 elections. Credit: Zofeen Ebrahim/IPS

KARACHI , May 11 2013 (IPS) - The road leading to the office of the Muttahida Qaumi Movement (MQM) wears a forlorn look. The same deserted air hangs over the Awami National Party (ANP) headquarters here in Karachi, just hours before voting begins on Saturday in Pakistan’s long-awaited general elections.

Today marks the first democratic elections held here since 1962, but Pakistanis have not had much cause to celebrate. The weeks leading up to Election Day have seen much blood spilled: as campaigning came to a grinding halt on May 9, 48 hours before the polling stations opened, the death toll stood at 121, including candidates, with 496 injured.

Most of the attacks were carried out by the Taliban, which had issued numerous warnings to avowedly secular parties like the MQM, the Pakhtun-dominated ANP and the Pakistan People’s Party (PPP) to put a stop to their campaigning.

The militants issued an official communiqué on May 1, signed by Pakistani Taliban leader Hakimullah Mehsud, instructing members to carry out suicide bomb attacks across the country on Saturday. “We don’t accept the system of infidels, which is called democracy,” the letter said.

Refusing to be moved by the Taliban’s terror tactics, political parties resorted to clandestine meetings, television talks shows and the Internet to spread the word to their respective electorates.

The ANP has borne the brunt of the Taliban’s wrath. Senator Shahi Syed informed IPS that in Karachi alone the party has “lost over 35 office-bearers in the last six months.” A ghastly sense of déjà-vu has accompanied their election campaign, which has largely consisted of picking up the dead, marching in funeral processions or rushing the wounded to hospitals, according to ANP Leader Asfandyar Wali Khan.

The group has lost 700 workers in bomb and suicide attacks since 2001, when the United States named Pakistan an ally in its War on Terror.

The MQM also elicited the ire of the Taliban when it drew attention to the latter’s infiltration of Pakhtun-dominated areas of Karachi, after a massive army operation in 2009 destroyed the militants’ stronghold in Swat, a district in the northern Khyber Pakhtunkhwa (KP) province, and sent thousands of displaced fighters fleeing into urban centres.

Back then, according to MQM Spokesman Haider Abbas Rizvi, his party was “made a mockery of” for expressing such concerns. Today, all of Karachi’s 18 million residents are intimately aware of the threat posed by the Taliban.

Rizvi told IPS his party has paid dearly for taking a stand against the militants. An explosion close to the party’s headquarters killed 18 people last week. Rizvi, a resident of Sohrab Goth, a Karachi suburb thought to be a Taliban stronghold, has so far survived five attempts on his life.

But he fears less for his safety than for the safety of his supporters, whom the Taliban have threatened to attack if they defy the group’s so-called “election ban”.

The PPP, meanwhile, has relied on eulogising its former premier Benazir Bhutto who was assassinated in 2007. Her son and heir to the PPP dynasty, 24-year-old Bilawal Zardari Bhutto, fled the country and spent a good part of the election campaign in Dubai.

As election day dawned there was still no word on the whereabouts of Ali Haider Gilani, PPP member and son of former Pakistani Prime Minister Yusuf Raza Gilani, who was kidnapped by gunmen at an election rally in the central Punjabi city of Multan, also known as the City of Sufis, on May 9.

The landowning Gilani family is among the most powerful in the country. Police suspect that the banned militant groups Sipah-e-Sahaba and Lashkar-e-Jhangvi are behind the kidnapping.

In the face of endless warnings, all parties have been forced to innovate new and creative ways of electioneering. Rizvi says the MQM turned to the Internet, using Twitter and Facebook to reach supporters, while the ANP, unable to afford official advertisements on the radio and television, held what they called “drawing room meetings,” went door to door distributing pamphlets, and used Skype.

With much of the country’s attention focused on the Taliban’s actions, little thought has been given to possible skirmishes between official political parties.

Tensions were running high on Thursday night as former cricket-star-turned-politician Imran Khan, currently heading the opposition Pakistan Tehrik-e-Insaf (PTI) party, addressed his supporters from a hospital bed in Lahore, after falling 15 feet from a mechanical lift trying to reach a stage at an election rally just two days earlier.

His loud criticism of U.S. drones strikes in tribal areas and his long campaign against corruption have won Khan the support of scores of young, urban Pakistanis.

But Rizvi dismissed Khan’s supporters as “young people from posh localities and the affluent class who know nothing of the ground realities or the problems faced by the common man; they form just five percent of the youth and will not be able to take away our youth vote bank.”

Mehmood Y. Mandviwalla, the law minister of the Sindh’s caretaker government, told IPS on May 10 that the situation could “get ugly” if rival parties clash at the ballot box.

Still, opinion polls taken ahead of May 11 indicated that, despite a prevailing climate of terror, turnout this year would exceed the 44 percent voter participation of 2008. Just a day ahead of the election Rizvi predicted that people would come “in droves” to cast their ballots.

“It’s worth giving your life to eliminate the terrorists,” he said.