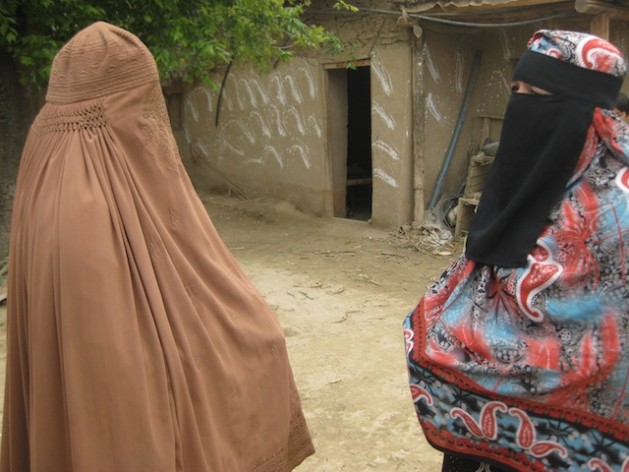 BAJAUR AGENCY, Pakistan, Apr 9 2013 (IPS) - “My sole motive is to serve my people, especially women who have had no role in politics so far. I feel we can make progress only by bringing in women into mainstream politics.”

These are the words of Badam Zari, 40, who has filed her nomination papers with the Election Commission of Pakistan (ECP). Zari is contesting from the militancy-hit Bajaur Agency, one of the seven districts in the Federally Administered Tribal Areas (FATA) near the Afghanistan border.

Zari’s tiny but lush green house in Arang village is buzzing with activity as women from the neighbourhood come in droves to congratulate her for the exemplary courage she has shown in standing for elections.

Forget standing for election, women in FATA do not vote. It was only in 1997 that the federal government gave the six million residents of FATA the right of adult franchise. Before that, only a few government-nominated elders called Maliks were entitled to cast votes or stand in election.

"Women here are suffering as none of the lawmakers in FATA have ever worked towards their development.”

In January this year, the Election Commission of Pakistan proposed an amendment to the Representation of People Act, 1976, making it compulsory for every polling station to have at least 10 percent of its total votes cast by women. It went so far as to suggest that results from polling stations not be taken into account till that provision was met. The government, however, paid no heed to the suggestion.

“I am extremely worried about tribal women, most of who stay in their houses, which has prevented them from making any progress,” Zari told IPS. “My only ambition is to struggle for the improvement of women’s conditions in Bajaur Agency. Women here are suffering as none of the lawmakers in FATA have ever worked towards their development.”

Her action, she is sure, will motivate women to come to the polling booths on polling day and vote in her favour.

However, the indications are that women will continue to stay disenfranchised not only in FATA but in the majority of the country, especially in rural areas where people are reluctant to allow them to cast their vote as it would constitute a break with tradition.

Free and Fair Election Network, a local NGO, says that women were barred from voting at 564 of the country’s 64,176 polling stations in the 2008 general elections. Political parties in Dir, Kohistan, Battagram and other districts of Khyber Pakhtunkhwa (KP) province decided to bar women from voting citing local traditions.

Government data indicates that Pakistan has more than 48 million registered male voters and just more than 37 million female registered voters. For the 12 National Assembly seats that went to the polls in 2008, only 394,977 or 30.37 percent were polled out of the total registered votes of 1,280,897. Women, as usual, had stayed away.

This is the reason why Zari’s decision to take part in the election is both unprecedented in Pakistan’s history and a crucial step in the emancipation of women in the area. “No women have so far turned up at polling stations on voting day in FATA,” Prof. Zahra Shah of the sociology department at the University of Peshawar told IPS. “Zari’s decision to jump into the race is likely to be welcomed given the boldness and courage she has shown.”

Educated up to eighth grade, Zari has no children. Yet she is determined to work towards the education of the children in her region and help them play a part in development.

Zari told IPS she is undeterred by the presence of wealthy and influential people in the elections. She is determined to give women a voice in the National Assembly.

She has the full support of her husband Sultan Khan, a teacher in the government-run Bajaur Public School and College. Khan says he will strive for women’s development with her.

“Despite being poor, we are committed to running a full-scale campaign and seek victory. Zari’s win would mean a victory for all FATA women,” he says. “There is tremendous pressure on us to withdraw her from the election but there is no looking back and we will go to the polls with complete preparation.”

Zari has much support from other women in the area. “We will support her as she is the only woman to have mustered courage against all odds. She requires our unflinching support,” Jamila Bibi who hails from the National Assembly constituency NA-44 Bajaur-II from where Zari is contesting, told IPS.

“I also hope that men will throw their weight behind her,” she says. “We have planned to make door-to-door visits to canvass for Zari. She is our beacon of hope.”

Zari is not alone in her act of courage. The submission of nomination papers by another woman, Nusrat Begum from Lower Dir district NA-34 of adjacent KP province, is also being hailed by womenfolk.

Begum, 28, a graduate from the University of Peshawar, also happens to be the first woman in Lower Dir ever to have the courage to contest elections.

Both are contesting elections as independent candidates.