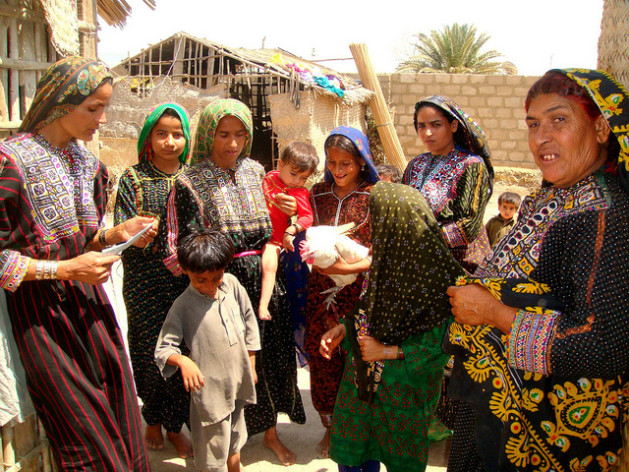 KARACHI, Pakistan, May 9 2013 (IPS) - As Pakistan inches closer to the May 11 elections, and the accompanying heat and dust get even thicker, it is pertinent to stop for a moment and ask: what do women voters in Pakistan want?

Just three square meals and an education for their children, according to Shabina Bibi, an unlettered woman in her thirties who lives in a shanty near the Kemari port in Karachi.

“My husband lost his job last month,” she told IPS, “and for the first time in my life, I have had to venture out, looking for a job.” A mother of four, she now works as a domestic in Karachi.

It has taken Bibi – and her husband – tremendous courage to step out of this boundary. The participation of women in Pakistan’s labour force is just 28 per cent, according to the World Bank’s World Development Report 2013. Gender roles in this society are defined very strictly: a woman has to stay home to look after the family, while it’s the man’s job to go out and provide for them.

There is nothing more that women voters want in this election than to be able to move beyond the traditional stereotypes and walk shoulder to shoulder with men. No longer content to be confined to the shadows of home, they want to step out into the light and participate actively in the public sphere.

It’s not easy being a woman in Pakistan, said Tahira Abdullah, an Islamabad-based peace activist. It’s worse if you occupy the lower rung of the economic ladder, she added, speaking to IPS from the capital, Islamabad.

“Women face disproportionately high levels of poverty, work in exploitative labour conditions, get little or no remuneration, face the double burden of housework and reproductive responsibility, and are subjected to gender-based violence.”

Abdullah wants to see this changed in these elections and hopes for a more emancipated leadership. “It’s time political parties woke up to the feminisation of poverty in Pakistan which is resulting in disproportionate misery and injustice for women,” she said.

However, in a conservative society such as Pakistan’s, that is asking for the moon. “Most men still believe in their own chauvinism and consider women taking a backseat as appropriate to their gender,” said Najma Sadeque, a veteran journalist in Karachi. “The process would have been faster had we got rid of the feudal system and fundamentalists.”

There are some 37 million registered women voters in Pakistan, making up 44 per cent of the country’s 86 million-strong electorate. Another 11 million women are eligible to vote but have not registered.

Women seldom get heard or find leaders on decision-making bodies to carry their voice.

In addition, their aspirations for their country are often radically different from men’s – but these, again, are never articulated.

“The country a woman wants is one where she is not treated as a secondary citizen,” said Aziz, “where she can live with peace and dignity, has a say in the affairs affecting her life, and is not subjected to age-old negative socio-cultural traditions; where her honour and life are not threatened within her home or her community, where she feels secure, where she and her family members will not be subjected to violence and exploitation, where the rule of law prevails, and where everyone has equal and equitable justice.”

“Women want a welfare state, not a nuclearised security-driven state,” said Abdullah. And, unlike men, who are obsessed with their own selves, their ‘biradari’ (clan), feudal and tribal politics, women worry about the future of their families.

“Women are inherently peace-loving and envisage a world free of weapons, war and strife,” Abdullah said. They prefer lawmakers to devote their energy to solving the nation’s problems rather than worrying about who to go to war with or how much money to spend on defence, she added.

Endorsing this sentiment, Sadeque said that women have rarely started or propagated wars. “There are few Margaret Thatchers among women,” she remarked to IPS.

Yet, women are the ones affected disproportionately by conflict and disaster situations, she noted. To help change this, women must be better represented in political bodies and must have a say on the various issues affecting them.

The Aurat Foundation, an organisation working for the rights of women, has long been advocating an increase in the representation of women in the national and provincial assemblies, from 17 per cent to 33 per cent.

The foundation has also asked political parties to hold internal elections for women and to have specific women-only constituencies, to ensure a level playing field during elections. None of these recommendations has so far been accepted.

The foundation had, in fact, come out with a handbook of suggestions on women’s empowerment, for the election manifestos of political parties.

While a few parties included some of the recommendations in their manifestos, most were “relegated to a separate chapter, without cross-references or linkages to mainstreaming,” said Abdullah, who co-authored the handbook with Aziz.

A few parties even promised to ban ‘jirgas’ (tribal or village councils), but most of them hedged and suggested an alternative dispute resolution system under the local government.

Unfortunately, very few women are members of the manifesto committees of political parties. “The female to male ratio among those who have helped with party manifesto documents is, on average, three females to 20 males,” Aziz said.

What chances do women have, then, of being heard in this election?

They have a long way to go, certainly. Of the 23,079 candidates seeking general seats in the national assembly, only 3.5 per cent are women, according to the Election Commission of Pakistan. Political parties refused to acquiesce to the pressure by civil society to reserve 10 per cent of the spots on tickets for women candidates.

What women are doing, however, is getting out into the field and campaigning for their leaders. Party leaders are “ensuring women’s participation in their election rallies through their women’s wings, to garner their votes and nominate them for their reserved seats,” said Abdullah.

It’s a small, but significant, start.