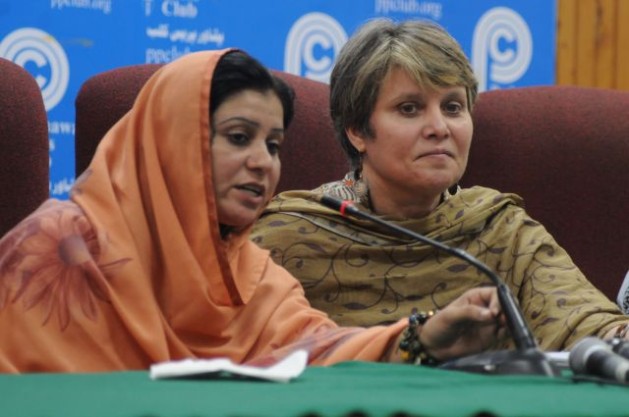 PESHAWAR, May 8 2013 (IPS) - “Women in Pakhtun society have traditionally helped their men in hard times,” declares former Pakistani lawmaker Shagufta Malik. They are doing so again, and how, going by their hectic campaigning activity in northern Pakistan’s Khyber Pakhtunkhwa province.

An erstwhile member of the provincial assembly, Malik is spearheading the election campaign for Awami National Party chief Asfandyar Wali Khan, who is running for a seat in the national legislature.

The ANP leader had narrowly survived a suicide attack in October 2008 in Charsadda, one of the 25 districts of Khyber Pakhtunkhwa and the birthplace of the party, and has since been confined to the federal capital Islamabad and restricted from visiting his constituency as often as he would have wished.

Now, as the May 11 election date looms near, the outlawed Tehreek-e-Taliban Pakistan has stepped up its deadly exploits against the ANP primarily, and other parties such as the Muttahida Qaumi Movement (MQM). Accordingly, Wali Khan and other leaders have been instructed to stay away from electioneering in the province, which is adjacent to the Afghan border.

A band of women leaders from the ANP has therefore taken it upon themselves to campaign for their leaders in their absence. “The Awami National Party is not the type to be frightened by acts of terrorism,” says Malik, who hails from Nowshera district and is leading the campaign for Wali Khan in the NA-7 constituency in Charsadda. “It’s high time we supported our leaders and campaigned for them,” she adds.

Assisting Malik in her effort are other prominent ANP women leaders, among them Bushra Gohar and Jamila Gilani, both former members of the National Assembly. Carrying lanterns – the election symbol of the ANP – these feisty women are going from area to area, talking to the female population.

“We have decided to reach out to the people through our women,” says Malik.

Gohar adds: “We gather them in spacious homes in different villages and hamlets and address them.”

Currently, the National Assembly has 60 seats reserved for women and 10 for minorities; there is direct election for the remaining 272 seats. And forget contesting elections – women in some provinces cannot even cast their votes as it would amount to going against local tradition.

That situation has undergone a sea change now, says Gohar. Malik and her team are not only convincing women in the region to cast their votes in favour of ANP candidates and persuading their menfolk to do the same, but also educating them in the whole process of casting a ballot.

Attacks on the party, however, have made the going tough for the ANP. The 2008 attempt on Wali Khan’s life took its toll and he has had to pay the price of being away from his constituency. Incidentally, his mother, Begum Nasim Wali Khan, was the first woman to win a general seat in the National Assembly, in the 1977 elections.

The ANP, says Gilani, who is also a staunch activist with the Human Rights Commission of Pakistan, has already lost some 800 leaders and workers to the Taliban and can’t afford to lose their leader. If the terrorists succeed in killing him, she says, it would be difficult for the party to stay united because he is a binding force.

The ruling party is standing steadfast in its resolve to face up to the Tehreek-e-Taliban Pakistan. Despite the blasts and the killings, party leaders are continuing their electoral campaign and holding meetings, though perhaps with less fervour than in the last elections.

The effort is to garner sympathy among the electorate by highlighting the sacrifices of its leaders and the ANP’s bravery in not backing down despite the constant threat to lives from the militants. Impressed by their efforts, people are joining the party in droves, the leaders claim.

Regardless of this, Ghulam Ahmed Bilour is in no mood to give up and cede ground to his rivals, particularly Pakistan Tehreek-e-Insaf (PTI) chairman Imran Khan, against whom he is running in the NA-1 constituency of Peshawar.

Barely a fortnight before the elections, he was found addressing a meeting of the elders of the Mohmand tribe. Ghulam Ahmed’s nephew – the deceased Bashir’s son – Haroon Ahmed Bilour is contesting PK-3, a constituency they have won five times in a row.

Former chief minister Ameer Haider Khan Hoti is also holding election-related meetings in Mardan, a city and district in Khyber Pakhtunkhwa province. He is cautious about the unsafe environment, but is managing to stay in touch with workers.

Likewise, the ANP’s general secretary Malik Ghulam, who is standing in PK-2, in Peshawar, is leaving no stone unturned to reach out to his electorate.

In a meeting at Bilal Town Grand Trunk Road on May 2, where he says many people announced their intention to join the ANP, he tore into rival Pakistan People’s Party candidate, former minister Syed Zahir Ali Shah, and presented himself as the credible alternative. He argued that his party’s track record would help them win.

At their end, Shagufta Malik and other women leaders are spreading the same message of development and the need to battle against Islamist militancy.

At a public meeting of women in Prang Mamakhel in Charsadda district on May 2, Malik said the party was confident of showing better results due to the massive development work it had undertaken during its five-year rule in the province.

“Our party executed development schemes at the cost of the lives of its workers and leaders, and won’t spare any effort to continue their struggle for the uplift of the Pakhtun population (the majority in the province),” she said.

She exhorted people to vote for ANP leader Wali Khan and other candidates, to enable the party to resume its efforts to crush militancy and establish peace.

Muhammad Khan emphasised yet again that the ANP was the main target of the militants and the only party taking them on. She also said the matchless sacrifices were bearing fruit: even the women are out in support of the party.