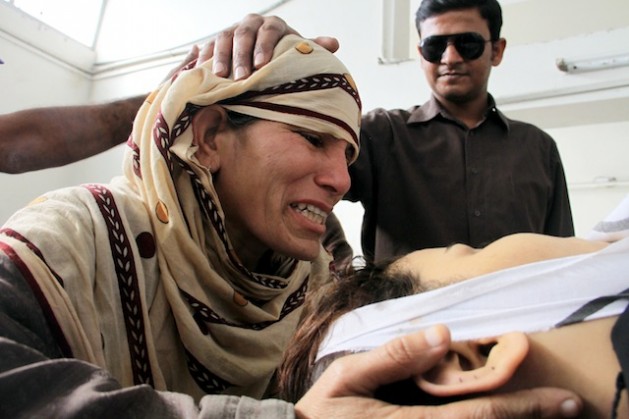 Families of the deceased health workers mourn the loss of their loved ones in Karachi. Credit: Adil Siddiqi/IPS

PESHAWAR/KARACHI, Dec 21 2012 (IPS) - The murder of nine health workers vaccinating children against polio in Pakistan’s northwest cities of Peshawar and Charsadda in the Khyber Pakhtunkhwa (KP) province, and its southern port city Karachi, have elicited shock and outrage.

Four female health workers were killed in Karachi, shot dead by masked men on motorbikes. The other five victims, including a 17-year-old volunteer, were slain in Peshawar and Charsadda.

These killings were preceded by another death in Karachi’s Sohrab Goth area on the first day of a planned three-day immunisation campaign across the city, which has now been suspended in the provinces of Sindh, Balochistan and parts of KP, located on the Afghanistan-Pakistan border.

For activists and health workers familiar with the political terrain here, this attack – heinous as it is – is just the latest incident in a long campaign spearheaded by the Taliban that will likely continue long after the media hype has died down.

Back in 2005, Maulana Fazlullah, leader of Tehreek-e-Nafaz-e-Shariat-e-Mohammadi (TNSM), a fundamentalist militant group intent on imposing Sharia law throughout the country, began using a local radio station to spread an anti-vaccine message in the Swat district of the KP.

“The campaign began long before militants set foot in Swat – Fazlullah would deliver sermons from mosques, warning people to stay away from the vaccination because it was ‘against Islam’,” Dr. Rasool Khan, with the Expanded Programme of Immunisation (EPI) at the Aga Khan University, told IPS.

As militants began to gain a stronghold in the Federally Administered Tribal Areas (FATA), Fazlullah became commander of the Swat chapter of the outlawed Tehreek-e-Taliban Pakistan and his opposition to the vaccine became an official Taliban slogan.

“Everywhere in Khyber Pakhtunkhwa and the adjacent FATA, the Taliban came out to oppose vaccination,” Rasool Khan said. The militants argued that the oral polio vaccination (OPV) was a ploy used by the U.S. and its Western allies in the ‘war against terror’ to render Muslims infertile and stem population growth.

This argument found favour with the local population, who had become sceptical of the campaign after observing United Nations officials and aid workers travelling around the region in limousines while carrying out immunisation drives.

By 2011 polio was endemic in only three countries worldwide: Pakistan, Afghanistan and Nigeria. After coming very close to eradication, with only 28 cases nationwide in 2005, Pakistan saw a rapid increase to 117 cases in 2008 and 144 in 2010. By 2011, the country had registered 198 cases of polio.

Since 2007, immunisation drives in the KP and FATA have recorded about 50,000 incidents of families refusing the OPV, according to the Health Department.

For years, vaccinators have been terrified for their lives, while others have avoided joining the campaign for fear of drawing the ire of militants.

Tahseenullah Khan, national coordinator of the National Research and Development Foundation (NRDF), which has supported the UNICEF-sponsored mobilisation campaign in KP and FATA since 2009, says his organisation hired the services of religious scholars and began to make progress in getting through to the local population.

But the scandal involving Shakil Afridi – a CIA agent posing as a doctor who set up a fake immunisation centre in the northern town of Abbottabad as a front to gain information on Osama bin Laden last year – worked greatly in the Taliban’s favour.

“Now the majority of people believe that what the Taliban were saying about the ulterior motives of the U.S. to send spies to militant strongholds was true,” Tahseenullah Khan told IPS.

But health workers refuse to be deterred. Through the grief comes a determination to re-double eradication efforts. Dr. Imtiaz Ali Shah, the focal person for polio immunisation in KP, told IPS that health workers are devising a new strategy to re-launch the campaign through elected representatives.

“We want to have a full-scale campaign to wipe out the ailment before it assumes the shape of a full-blown epidemic,” he said.

This determination is not limited to the tribal areas, which have long borne the brunt of fundamentalism and militarism, but is now widespread down in Pakistan’s urban centres as well.

Shahnaz Wazir Ali, adviser on polio to Pakistan’s Prime Minister Raja Pervez Asharf, who flew in from Islamabad to visit the injured and condole with the families of the four deceased health workers here, told IPS, “The Sindh government will have to do some serious stock-taking and revisit its present campaign – we need to reach every child.”

But experts in Karachi are not certain who was behind the well-coordinated killings. The Taliban have denied any involvement in the incident.

“I visit Landhi’s Gulshan-e-Buneer area every month and know the place like the back of my hand,” said 35-year-old Nasim Munir, head of the anti-polio campaign in the area where two women were killed, told IPS. She refuses to believe that the two health workers, Fehmida and her neice Madiha, were shot dead because of opposition to the OPV.

“If there was any ill-feeling, they (the health workers) would have been turned out of people’s homes or refused entry – not killed,” she stressed.

“This is a bigger plot and needs to be probed further,” she added.

“Till the investigations are complete, we can only speculate. The timing is significant in Karachi, where there is already much uncertainty and unrest,” said Wazir Ali.

President of the Sindh chapter of the Pakistan Medical Association, Dr. Samrina Hashmi, also remains uncertain about the Taliban’s hand in this, but speculated that the attacks were an attempt to “cause anarchy, and to try and disrupt the upcoming elections”, scheduled for March 2013.

“There is little doubt that this was a concerted plan to counter and block anything that was high priority for the government,” Wazir Ali added. She believes shooting women health workers sends the message that there are elements “capable of doing anything”.

“Who (else) would want to kill people who are working for the health of children?” Dr. Altaf Bosan, working as technical focal person for the Prime Minister’s Anti-Polio Cell, asked.

But he stressed, “We will not let anyone sabotage this programme, it was going very successfully.”

Indeed, with only 56 cases recorded in 2012, Pakistan has made good progress this year, contributing to the global decline in fatal and harmful cases of polio from 350,000 in 1998 to less than 1,000 last year.

But while the polio virus lives in even one child, the world remains at risk, experts say. The discontinuation of the campaign in the Sindh comes as a huge blow to health experts and others involved in the immunisation drive.

Dr. Mazhar Ali Khamisani, heading the Sindh Expanded Programme on Immunisation, told IPS, “It’s a major setback for our campaign. We have suspended the programme and have asked the government to conduct (a proper investigation) and catch the culprits before our volunteers venture into the field again.”

According to a government public health expert who has worked with the polio campaign since it began in 1994, speaking to IPS on condition of anonymity, “Today they stopped the campaign in Karachi, tomorrow they (could) stop it throughout Pakistan. Do we want a nation of handicapped people?”

While it is impossible for the government to provide security to each and every health worker in the field, Hashmi believes intelligence agencies need to be vigilant enough to outwit and preempt militants’ plans.

Meanwhile, the tragedy appears to have had one significant political repercussion: it has chilled the cosy relationship the Taliban once enjoyed with several religious groups across the country. Soon after the killings, Tahir Ashrafi, heading the Pakistan Ulema Council, said 24,000 mosques associated with his organisation would condemn the tragedy during the Friday prayers.