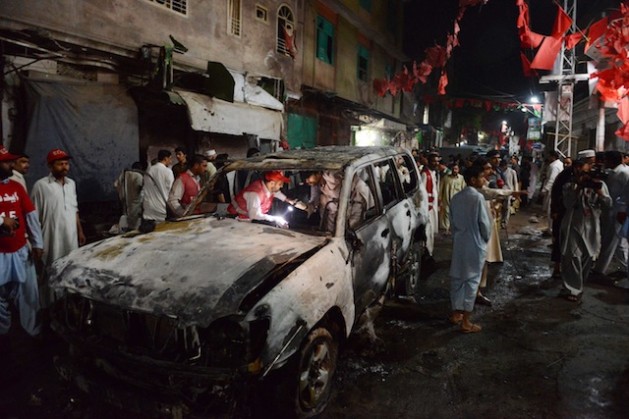 PESHAWAR, Apr 17 2013 (IPS) - Bacha Khan Markaz, a two-storey building in the northern Pakistani city of Peshawar, is abuzz with activity. Located deep in the Khyber Pakhtunkhwa (KP) province, whose northwestern tip borders Afghanistan, the building serves as the headquarters for the Awami National Party (ANP), which is gearing up for general elections on May 11.

But contesting major polls in a Taliban stronghold is no easy task. Tucked in between the flurry of press conferences and public meetings are warning letters, death threats and even assassinations.

"We do not fear the Taliban. We have been making sacrifices even before Pakistan itself came into being."
On Sunday, Apr. 14, ANP leader Mukarram Shah was killed in a bomb blast in the Swat valley, an administrative district of the KP. A prominent member of the Swat Peace Committee, Shah was alone in his car at the time of the explosion, which the outlawed Tehreek Taliban Pakistan (TTP) quickly claimed responsibility for.

TTP does not trouble to hide its hatred of the ANP, which has ruled the KP since 2008. In 2009, a major ANP operation evicted the Taliban from the Swat valley.

Following the Apr. 14 assassination, militants reiterated their stern warning to “secular” parties that opposition to the Taliban will not be tolerated.

All civilians have been instructed to stay away from rallies and public meetings – but the threats have fallen on deaf ears as, time and again, election hopefuls from groups like the ANP, the Pakistan People’s Party (PPP) and the Muttahida Qaumi Movement (MQM) come out into the streets, drawing crowds of hundreds, sometimes thousands, of supporters. 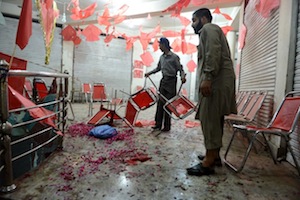 And as the popularity of secular parties grows, so too does the wrath of the militants. On Tuesday, Apr. 16, a suicide bombing at an ANP public meeting in Peshawar killed 10 people.

Though visibly shaken by these attacks, the ANP is showing no sign of slowing down its campaign drive in this last push before Election Day – rather, it seems to be ramping up efforts.

The party has a long and proud legacy of taking up the cudgels on behalf of their countrymen and women. ANP Vice President and former Federal Minister Ghulam Ahmed Bilour tells IPS his party “does not fear the Taliban, as we have been making sacrifices even before Pakistan itself came into being.

“Our leader Khan Abdul Ghaffar Khan (known as Bacha Khan, or “king of chiefs”) spent 33 years in jail for fighting British rule and then later, fighting the Pakistan government for the rights of Pashtuns”, the country’s second-largest ethnic group, in what was then called the North-West Frontier Province.

Through years of struggle, Khan Abdul Ghaffar Khan helped residents of the province win the right to vote, while his son Abdul Wali Khan worked relentlessly to bring about some degree of provincial autonomy for the majority-Pashtun region.

ANP leaders feel the government needs to do more to ensure their party members’ safety.

“We are not afraid of threats but it is the government’s responsibility to provide us security”, Afrasiab Khattak, ANP president for the KP, tells IPS. He also criticises the interim government’s decision to “withdraw security from our party headquarters of Bacha Khan Markaz”.

Running in and out of public meetings, Khattak spares a few moments to express frustration at the official Election Commission’s apathy towards the ANP’s struggle to fight for democracy and restore peace.

He referred to the Jan. 12 militant attack on a motorcade of provincial ANP leader Bashir Khan Umarzai who was on his way to address an election rally in his hometown in the nearby Charsadda district, which left 14 people, including Umarzai, injured.

In 2010, under the leadership of Asfandyar Wali, the ANP restored the province’s historic name of Khyber Pakhtunkhwa.

Today, Bilour – who was injured in Tuesday’s suicide — is contesting elections for a seat in the 342-member National Assembly of Pakistan, which is responsible for electing the country’s prime minister.

While courting his constituency in Peshawar, Bilour faces strong opposition in the form of the beloved cricketer-turned-politician, Imran Khan, head of the Pakistan Tehreek Insaf (PTI), which has not yet fallen out of favour with the Taliban.

But for people like Mushtari Bibi, a student in the political science department of the University of Peshawar, the choice is clear: “The ANP must win to establish peace and do away with militancy. If the ANP is kept out of politics, the country could fall to the Taliban,” the young student told IPS.

She says others parties have not openly criticised the Taliban as vehemently as the ANP.

The party has pledged to end militancy in this war-ravaged northern province that struggled against violence ever since the 2001 U.S.-led invasion of Afghanistan toppled the government in Kabul and sent thousands of militants fleeing into the mountains on the Afghanistan-Pakistan border.

The ANP has also launched major development projects here; between 2008 and 2013 the party established over 30 colleges and universities, distributed free textbooks to students up to the 10th grade, built the province’s first ever children’s hospital, and provided scores of scholarships to girls in rural areas to promote women’s empowerment.

The top priorities in its political manifesto are eradicating militancy, ensuring women and minority rights and providing healthcare, education and employment to the people in northern Pakistan, millions of whom have been rendered homeless or jobless by the militancy.

Over the years, the ANP has also won the sympathies of many of the province’s 25 million residents for withstanding “a merciless campaign of violence, launched against it by militants”, according to Bilour.

The party’s 2013 election campaign began in the Gul Bahar area of Peshawar on Monday, Apr. 7, just a few short months after Bilour’s younger brother and former KP Senior Minister Bashir Ahmed Bilour was assassinated by the Taliban in a suicide attack in December 2012.

According to Ghulam Ahmed Bilour, the ANP has “sacrificed too much” to call off its campaign in the face of threats and intimidations.

In total, the group has lost 750 members to attacks by the TTP. Rather than allowing the terror to deter them, however, Bilour and his fellow party members are determined to see the race through in order to convey their message of peace to the people.

“If we take the Taliban seriously and sit home instead of campaigning for the election, it would amount to leaving the field quite open to them — and, by extension, the religious parties who have a soft spot for militants – to consolidate their power. We don’t want that to happen,” Bilour said ahead of his election meeting in the historic Qissa Khwani Bazaar, where British troops massacred over 400 unarmed, peaceful demonstrators in 1930.

This rally, like most public gatherings hosted by the ANP, is expected to draw upwards of 5,000 people.

Some, like Peshawar University doctoral candidate Shehnaz Begum, believe an ANP victory will only mean more bloodshed and violence. “If they (ANP) win, it could snowball into a major crisis because the Taliban would never spare them for their secular views,” she told IPS.

She also echoed an oft-expressed sentiment here, that the ANP should refrain from “siding with the United States” against the Taliban, and should denounce “liberalism”.