KARACHI , May 6 2013 (IPS) - Twenty-five-year-old Syed Hasan, a doctor practicing in a private hospital in Lahore, plans to spend most of May 11, Pakistan’s long-awaited Election Day, in bed. 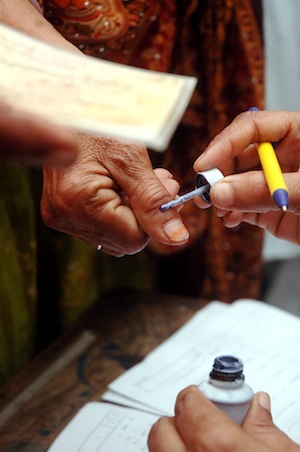 Members of the minority Ahmadi community in Pakistan say they have been disenfranchised by the country’s election laws. Credit: Adil Siddiqi/IPS

A member of the Ahmadiyya faith, Hasan has promised to boycott the impending elections on the grounds that his community of roughly four million has been disenfranchised.

Ever since the constitution branded them non-Muslims, Ahmadis — who believe that the 19th century cleric Mirza Ghulam Ahmad is the messiah promised by God – have been amongst the most persistently persecuted minorities in Pakistan.

This discrimination is felt deeply at the ballot box, where Ahmadis are compelled to register their votes under a separate category from other residents and thus accept the status of non-Muslim, in violation of their religious identity, Amjad M. Khan, president of the U.S.-based Ahmadiyya Muslim Lawyers Association, told IPS in an email.

According to Hasan, “If we want to vote as Pakistani Muslims, which we consider ourselves to be, we have to denounce the Ahmadi community and our spiritual leader, Mirza Ghulam Ahmad, as a false prophet,” a move he is not prepared to make.

He told IPS his faith is more important to him than casting a vote.

Though the choice is a clear one for many Ahmadis, civil society leaders and even conscientious political parties worry about what the boycott means for democracy in this country of 170 million, where hopes for a “free and fair election” have been running high ahead of the May 11 polls.

For Adnan Rehmat, chief of the influential Islamabad-based media development organisation ‘Intermedia’, “If 200,000 adult Ahmadis cannot vote because the…laws disenfranchise them…it means the elections are technically neither free nor fair” and indicates that something is “seriously amiss” at the core of the state’s functioning.

“Ahmadis…are discriminated against at a level that’s unprecedented, even in our own chequered history,” Pakistani novelist and journalist Mohammad Hanif told IPS, adding that forcing Ahmadis to mislabel themselves at the ballot box is “much worse than disenfranchising people – it’s more like taking their humanity away”.

From its inception in 1947 until Muhammad Zia-ul-Haq took over as military dictator in 1985, Pakistan has had a joint electorate system that allowed all citizens equal right to elect political candidates of their choice, irrespective of religious leanings.

In a bid to “Islamise” Pakistan, Zia-ul-Haq ordered a separate system for what he called non-Muslims who could only vote for five percent of the parliament seats allocated to them.

The system has effectively robbed the community of political representation, preventing Ahmadis from rising to prominent posts within the government or even finding employment in state institutions like the police force.

In 2002, attempting to appease hard-line Islamists, former President Pervez Musharraf issued Executive Order No. 15, which mandated that Ahmadis be registered on a “supplementary voter roll”, a move Khan says is “anathema to Islamic justice”.

Since then, he said, successive governments have been wilfully blind to Pakistan’s “voter apartheid”, violating Article 25 of the International Covenant on Civil and Political Rights to which Pakistan has been a signatory since 2008.

Although some see this discrimination as a purely political issue, for Ahmadis it is a matter of life or death. Legal loopholes allow religious extremists to lash out at the minority community, while the country’s controversial anti-blasphemy laws pave the way for further intolerance.

Last month, the Jamaat-i-Ahmadiyya (Ahmadi Movement) issued its annual report for 2012, stating that 19 members of the community were killed last year; in total an estimated 226 Ahmadis have been killed in sectarian violence since 1984.

Almost three years ago, on May 28, 2010, 94 members of this community were massacred in their mosques during the Friday congregation in the eastern city of Lahore. Not a single perpetrator has yet been brought to justice.

This year, the opposition Pakistan Tehreek-e-Insaf (PTI), led by former cricket star Imran Khan, has taken up the cudgels on behalf of the persecuted minority. PTI Spokesperson Zohair Ashir told IPS his party considered all Pakistani citizens equal under the law.

“It’s a shame that past governments did not rectify the many injustices and inequalities in the system,” he said, adding that, if it comes to power, PTI will “address all such issues in an expeditious manner”.

He stopped short of specifying what concrete steps would be taken to ensure Ahmadi participation in the political sphere, admitting, “It is hypothetical at this stage to determine what legislative measures need to be taken and when. Fixing the economy and energy crisis and fighting terrorism are areas of immediate and high priority for us.”

Few believe the upcoming election will bring any changes.

Speaking to IPS over the phone from Chenab Nagar, a city in the Punjab province where 95 percent of the 70,0000 residents are Ahmadis, a 37-year-old Ahmadi journalist named Aamir Mehmood said he “cannot think of any politician or party that has the courage to initiate a debate and scrap these discriminatory laws in our country which are used against the minorities”.

As Election Day draws near, groups and individuals acting to protect the “sanctity of Prophet Muhammad” have been vocal about their approval of discriminatory election laws and their disdain for the scheduled boycott.

“If they (Ahmadis) want to reverse this decision (the 2002 executive order), they must take the route of the courts and the parliament,” Qasim Farooqi, spokesperson of the proscribed sectarian outfit Ahle Sunnat Wal Jamaat (ASWJ) told IPS.

“Boycotting is not the answer,” said Farooqi. “Voting is important, the Ahmadis must play their role — by not participating in the elections, they are only making the country weak,” he stressed.

The simmering tension bodes badly for Ahmadis, who sooner or later will be forced to bear the brunt of Islamists’ wrath. Last month, seven Ahmadis were booked on various charges including “defiling the Holy Quran” and “calling themselves Muslims”. They were also accused of printing and distributing “blasphemous” literature in the form of the community’s newspaper, ‘Al-Fazal’.

Community leaders said that the paper, one of the oldest in Pakistan, was only distributed within their community.