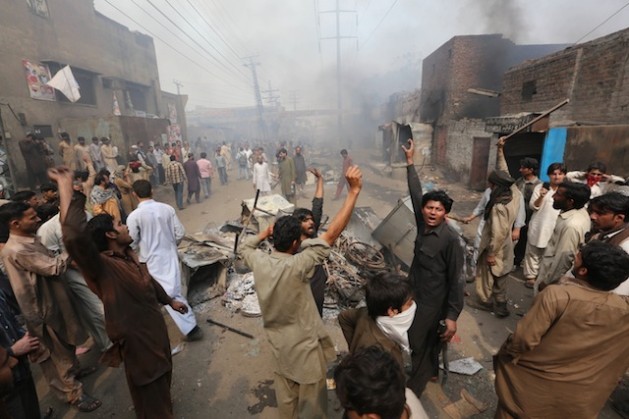 LAHORE, Apr 28 2013 (IPS) - Younas Gill, a self-employed tax accountant, sits on the pavement in Joseph Colony, Lahore, staring at the place where, until about a month ago, his home had stood.

It was burnt to ashes on Mar. 9, when a mob of Muslims tore through this Christian neighbourhood in the Badami Bagh district of Lahore, Pakistan’s second largest city, torching homes and displacing over 150 families.

Gill and his family now rely on government support and charitable contributions while they struggle to piece their lives back together. On Apr. 22, the Lahore diocese of the Church of Pakistan distributed a fridge, ceiling fans, pedestal fan, a two-burner stove, bicycle and iron to each of the affected families.

“The provincial government helped with the reconstruction of our house and NGOs and relief organisations are constantly supporting the locals since the tragedy occurred,” Gill told IPS.

But the passage of time, and the return of a sense of normalcy, has not replaced the fear that swept through this settlement just over a month ago. Gill says residents “fear reprisal from accused arsonists who have won bail from the courts.”

They are now back on the streets, “some of them with vengeance”, Gill said.

Men like Gill, and his fellow community members, represent the precariousness of life for Pakistan’s 2.8 million Christian residents, a tiny minority in a country of 170 million people, who have borne the brunt of so-called blasphemy laws that prescribe the death penalty for defamation of the Prophet Muhammad and life imprisonment for those who desecrate the Holy Quran.

New clauses introduced between 1980 and 1986 during the reign of former president Muhammad Zia-ul-Haq opened the door to broad interpretation of the law: between 1986 and 2013 1,100 cases of blasphemy have been brought to the courts, a significant number of which are against Christians, says Peter Jacob, secretary of the National Commission for Justice and Peace (NCPJ), formed by the Catholic Bishops’ Conference of Pakistan.

Jacob and other experts say these allegations are often trumped up and fabricated, and used by clerics and other religious leaders to incite mobs to attack Christian communities.

Joseph Colony, a three-acre settlement, was caught in the line of fire of one such blasphemy charge when a resident named Sawan Masi was accused of making “objectionable” remarks about the Prophet Muhammad.

Christian residents from the colony told IPS that the fateful day began with police instructing them to vacate the area for their “security” and not to worry about their properties.  The locals complied – and returned the next day only to find their homes burnt to ashes by a mob of 3,000 Muslims.

As information trickled in, it became clear that the police had been expecting the attack on the colony, yet failed to prevent it.

Just hours after the police chief of Badmi Bagh vowed to bring his police force to heel, and ensure the protection and security of all Pakistan’s citizens, a violent mob attacked the Christian colony of Francis Abad in the northeastern city of Gujranwala.

The incident began when a quarrel between clerics and a Christian youth accused of playing loud music outside a mosque erupted into a full-fledged street brawl between members of the two communities, which the police once again failed to prevent or halt.

Haroon Suleman, a Lahore-based lawyer who often appears in court over blasphemy-related issues, told IPS, “Most of such cases have been filed… to take over prime real estimate that Christian minorities inhabit.”

Many Christians who came to the cities as menial labourers settled on vacant state land decades ago.

As Pakistan’s cities expanded and businesses sprouted around these informal settlements, the land became highly lucrative, selling for millions of dollars per acre and quickly attracting the attention of Pakistan’s notorious urban land mafia. In Joseph Colony, the site of the Mar. 9 attack, an acre of land costs 2.4 million dollars due to its location in the heart of a highly commercialised wholesale steel scrap market.

The first step of land acquisition involves middlemen bargaining with residents for compensation of the entire settlement in order to set up godowns (warehouses).

“When the settlers refuse to accept cash offers and vacate their properties, tactics like (violence and intimidation) are use to get the desired results,” Suleman told IPS.

The political leadership of the country is well aware of the issue, but fear of reprisals from religious extremist groups prompts many to remain silent. None of the major political parties, including the Pakistan People’s Party (PPP), have raised the issue in their manifestos ahead of the May 11 parliamentary polls, knowing that those who dared in the past to speak up paid a fatal price.

Shahbaz Bhatti, a Christian leader and then-federal minister for minorities, was killed the same year for his vocal opposition to the misuse of blasphemy laws.

With elections approaching in just a few weeks, the Christian community is calling attention to their total lack of representation in parliament, with some leading minority parties calling for a boycott of the 2013 polls.

The national assembly has 10 reserved seats for minorities, among 272 elected members. Under the current system, Christians and other minorities vote for Muslim candidates from various political parties and the reserved minority seats are then awarded to those parties in proportion to the seats they have won. The parties, in turn, award that seat to their “loyalist”.

Dr. Nazir S. Bhatti, founder of the Pakistan Christian Congress (PCC), told IPS his party is against this practice, saying his constituency wants to elect their own representatives on a one-person one-vote basis.

On Monday, Apr. 15, Bhatti submitted a letter to the election commissioner of Pakistan, urging the official to ensure the safety of minorities – Christians, Hindus and Ahmedis – who choose to stay away from the voting stations.