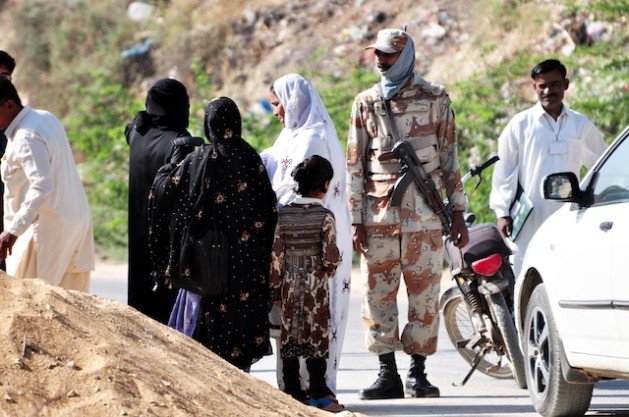 KARACHI, Mar 23 2013 (IPS) - Fifty-six-year-old Perween Rehman had dedicated her life to humanitarian work. As head of the Orangi Pilot Project’s Research and Training Institute (OPP-RTI), she spent years working in one of the largest informal settlements in Pakistan’s port city of Karachi, helping to overhaul a primitive sanitation system that was expected to serve Orangi’s 1.5 million inhabitants.

Though many have lauded her efforts in overseeing a successful community-driven sanitation programme, which is being replicated in parts of South Africa, Central Asia, Nepal and Sri Lanka, others felt her work was more deserving of punishment than praise: on Mar. 13, she was gunned down in a killing that, to date, no armed group has claimed responsibility for.

As Karachi’s 18 million residents struggle to survive a wave of violence, extremism and targeted killings, a new and terrifying pattern is emerging — those engaged in humanitarian work are now considered fair game.

Few believe the authorities’ claim that the chief suspect involved in Rehman’s murder  was killed in a police “encounter”.

Those close to her suspect she was killed by one of Karachi’s many powerful land-grabbing groups who have a vested interest in acquiring state land on which informal settlements have cropped up.

It is becoming clear that violence in Karachi cannot be stemmed unless authorities deal with the city’s flourishing gun culture.

In 2011, the Supreme Court was informed that the Sindh Home Ministry had issued 180,956 gun licences that year.

The apex court has stated, "Karachi must be cleansed of all kinds of weapons by adhering to the laws available on the subject, and if need be, by promulgating new legislation".

There are an estimated 20 million illegal arms in circulation in Pakistan. Most of these are smuggled in from Afghanistan. Some are manufactured in the Darra Adam Khel region of the Khyber Pakhtunkhwa (KP) province.

Some weapons are imported legally from China, Turkey and Brazil by dealers duly authorised by the Ministry of Commerce.

There are also registered arms manufacturers like the government-run Ordnance Factory in the town of Wah in the Rawalpindi district. Private sector manufacturers, mostly situated in Peshawar, the capital of KP, produce pistols, shotguns and rifles, among other weapons.

According to Dr. Pervez Hoodbhoy, a peace activist and professor of physics at the Islamabad-based Quaid-e-Azam University, Rehman “worked tirelessly but quietly, protecting Karachi’s poor slum-dwellers from the predators who covet their land”.

Prior to her death, Rehman had received death threats for her attempts to document the land mafia’s practice of illegally annexing land, in collusion with political parties, then selling it to Karachi’s millions of  people in need of housing, thus creating a dependent and destitute voter constituency.

Calling Rehman a “true heroine”, Hoodbhoy added, “In a country awash in weapons, and with a state machinery that is precariously weak, a grab for resources (land) will surely result in such atrocities occurring again and again.” Indeed, almost 60 percent of Karachi is comprised of informal settlements that lack basic services.

“Where big money is at stake, such as real estate, there is danger. I was surprised that she spoke openly about the problem — perhaps she never saw herself as a threat,” Sadeque told IPS. “There are too many groups involved, internal and external, confusing the situation.”

Police say 2012 was the worst year as far as the body count is concerned, with over 2,000 people dead in targeted killings and bombings in Karachi.

But the violence is not just restricted to this city — across Pakistan, aid workers are attacked, polio teams hunted down and teachers killed.

“On one side are crazed religious fundamentalists with guns, driven into a state of madness by mullahs using mosque loudspeakers and televisions. They kill women administering the polio vaccine and shoot schoolgirls for wanting to study,” Hoodbhoy told IPS. “On the other hand, there is the…equally diabolical murder of (humanitarian workers) like Perween Rahman.”

With Pakistan ranked among the top five most dangerous countries in the world for aid workers, according to a 2012 report by the group Humanitarian Outcomes, many see the space for good Samaritan shrinking rapidly in Pakistan.

Attacks on aid workers worldwide climbed to 150 in 2012, up from 129 in 2010; 308 aid workers were killed. A vast majority of the attacks — over 72 percent — took place in just five countries: Afghanistan, Somalia, Sudan, South Sudan and Pakistan.

“It is sad that people who can make a difference and who can help bring about change in Pakistan, are being removed,” said Nuzhat Lotia, a Pakistani development expert.

Using the hastag #ParweenRehman, various prominent personalities in Pakistan expressed similar sentiments. Ali Dayan Hasan, Pakistan Director of Human Right Watch, tweeted: “Slowly but surely, everyone and everything good in our country is being targeted and killed.”

“A selfish thought tonight,” tweeted Cyril Almeida, a correspondent for the daily Dawn newspaper. “I am sick at the thought of the growing number of (people) in my phone book who have been cut down. Too much death.”

Former cricket star and Pakistani politician Imran Khan tweeted that he was “Saddened to see what we are turning into”.

The situation for foreign aid workers is no better. In its December 2012 issue, The Economist wrote, “The climate for humanitarian workers has not been improved by the authorities. They have harassed aid professionals, restricting their movements and limiting visas, fearing that spies lurk among them”.

Last year, the Red Cross suspended much of its work in Pakistan after a British doctor was kidnapped and beheaded in the western city of Quetta.

Lotia is sceptical about whether things will ever improve. “The youth are losing important role models and violence is seen as the norm as that is what they are exposed to and hear about day in and day out,” she lamented.

Although the Pakistan People’s Party-led government completed its five-year term this month and will officially pass off power to an interim government until the general elections scheduled for May 11, Sadeque believes “the trend will continue” because all political parties have self-serving interests.

While despair seems to have snuck into the thoughts of even the most resilient and optimistic members of Pakistan’s civil society, Hoodbhoy urged those committed to creating a better society not to “run away”.

“We owe it to our future generations to keep telling the truth, to keep suggesting solutions, and to keep fighting,” he said.