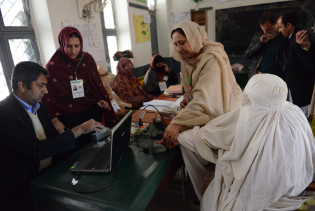 By Ashfaq Yusufzai
A blockade of NATO supplies to Afghanistan by cricketer-turned-politician Imran Khan’s party has ended up hitting Pakistan’s legal trade with its neighbour, say local traders and truckers.

By Zofeen Ebrahim
Fifty-six-year-old Perween Rehman had dedicated her life to humanitarian work. As head of the Orangi Pilot Project's Research and Training Institute (OPP-RTI), she spent years working in one of the largest informal settlements in Pakistan’s port city of Karachi, helping to overhaul a primitive sanitation system that was expected to serve Orangi’s 1.5 million inhabitants.
ADVERTISEMENT ADVERTISEMENT