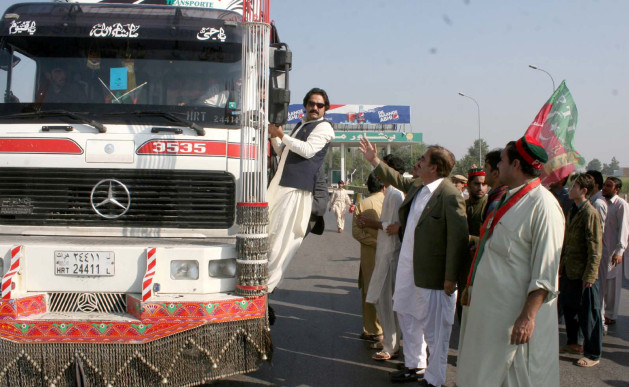 PESHAWAR, Nov 29 2013 (IPS) - A blockade of NATO supplies to Afghanistan by cricketer-turned-politician Imran Khan’s party has ended up hitting Pakistan’s legal trade with its neighbour, say local traders and truckers.

They say the agitation by Pakistan Tehreek Insaf (PTI) is hurting the common people of Afghanistan as the supply of food and other items through Pakistan’s Khyber Pakhtunkhwa province has come to a grinding halt.

“PTI’s protest hasn’t really affected the NATO forces, it is local traders and the common people in Afghanistan who are at the receiving end."

“PTI’s protest hasn’t really affected the NATO forces, it is local traders and the common people in Afghanistan who are at the receiving end,” Naseem Shinwari, president of the All Pakistan Trucks and Trailers Association tells IPS.

On Nov. 23, PTI chairman Imran Khan announced a blockade of NATO supplies to Afghanistan through Khyber Pakhtunkhwa – where the party is in power – to protest U.S. drone attacks in Pakistan that are targeted at militants but sometimes claim innocent lives.

Khyber Pakhtunkhwa is one of the two land routes in Pakistan – the other being Balochistan – used for transportation of supplies to the 100,000-strong NATO force in Afghanistan.

But it’s Pakistan’s regular trade with Afghanistan that has been hit.

Shinwari says the number of NATO trucks going to Afghanistan via Pakistan daily is only 500, of which 400 pass via the Chaman border in Balochistan.

Not only is the protest creating a shortage of goods and food supplies in war-ravaged Afghanistan but also threatening the jobs of about 50,000 drivers, assistants and loaders whose livelihoods depend on the trade.

Muhammad Rafi, a local driver, was allegedly roughed by PTI workers in Hayatabad, Peshawar on Nov. 24, the second day of anti-drone protest, despite possessing documents to show that his truck was not destined for NATO forces.

“I get 200 dollars a month for driving to and from Afghanistan, but this month the owner will pay me for just 20 days because our work has stopped,” he says.

Under ATTA, over 20 items are allowed to be transported to Afghanistan via Pakistan. These items are loaded on trucks from two seaports in Karachi from where they are sent to different Afghan cities, traders say.

Jamal Khan Afridi, a customs agent for NATO trucks, says the situation could snowball into a major crisis as the blockade has led to a backlog of more than 20,000 trucks at the Karachi seaport.

“About 5,000 NATO trucks have been burnt by the Taliban in the past five years and now PTI’s workers are blocking us,” he tells IPS.

Shamsur Rehman, who owns five trucks that carry NATO supplies, has taken his vehicles off the road. “PTI activists forcibly stop trucks. They have placed barbed wires,” he says.

“There have been clashes between drivers and the demonstrators,” he tells IPS.

PTI’s Peshawar district leader Younas Zaheer Mohmand, however, says they were only stopping NATO trucks and allowing those carrying commercial supplies through.

“In four days, we stopped about two dozen trucks containing NATO supplies, while about 200 commercial trucks were allowed to cross the border everyday,” he says. “We are not stopping the supply of transit goods because these are legally supplied to our Afghan brethren.”

But traders present a different picture.

“More than 3,000 containers are waiting to cross over to Kabul via Peshawar, but the protesters are not allowing them. They are also clashing with drivers,” Zahidullah Shinwari, president of the Khyber Pakhtunkhwa Chamber of Commerce and Industries tells IPS.

He explains that under ATTA, Pakistan is bound to facilitate the passage of trucks to the Afghan market. Afghanistan is a landlocked country and has no seaport of its own, which is why Pakistan allows supplies through its territory.

He says Afghan markets could run out of edible items and electronics if the protest continued.

But no immediate solution is in sight.

Ishtiaq Urmer, PTI’s spokesman in Khyber Pakhtunkhwa, says the protest would continue till the U.S. halts drone strikes. “We are allowing all legal trade activities because we don’t want to take any unconstitutional step,” Urmer tells IPS.

“But the U.S. has no right to kill innocent people. We want to tell the international community that drone attacks are in violation of international law.”