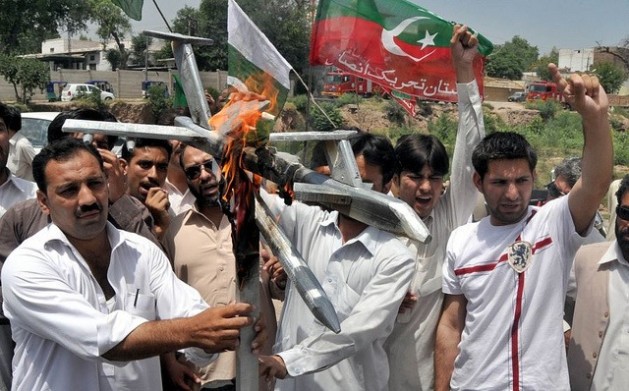 PESHAWAR, Pakistan , Jun 13 2013 (IPS) - Though the constant hum of unmanned aerial vehicles flying overhead makes a strong case for staying indoors, residents of Pakistan’s North Waziristan Agency are emerging in droves from their humble homes, some no bigger than huts constructed from mud and stones.

They have come out to protest the drone strikes on this devastated region, a hotbed of militant activity located on Pakistan’s northern border with Afghanistan, which is quickly becoming ground zero in the United States’ ‘War on Terror’.

"We watch the drones all day long in fear, even though we know that most attacks happen after sunset.” -- Rasool Bacha
Since 2004, 355 drone strikes have killed 3,336 people and injured scores more, according to a conservative estimate by the U.S.–based New America Foundation.

But while the U.S. government claims to be singling out militants and “Al Qaeda affiliates” for attack by remote-controlled aircraft capable of raining missiles down from a height of 10,000 feet, residents of this mountainous province say that civilians are taking a bigger hit.

Imad Ali, who has lived in North Waziristan his whole life, lost two sons in a drone attack. He told IPS that the pilotless planes appear unable to distinguish between civil and military targets, and called the strikes “indiscriminate and unacceptable.”

Now Ali, like many others in this Agency of 30,000, is joining mass rallies spearheaded by the Pakistan Tehreek Insaf (PTI), a major opposition party under the leadership of former cricket legend Imran Khan, to call for an end to strikes on unsuspecting non-combatants.

“I lost my wife and elder daughter to drone attacks in February,” Muhammad Rafiq, a schoolteacher in South Waziristan, told IPS, adding that civilian opposition to the attacks will keep growing as long as innocent people are losing their lives. 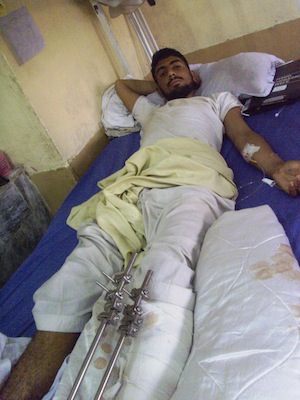 “We pass sleepless nights due to the looming threat of drone strikes. The situation is especially difficult for children who fear they could be killed at any minute,” he added.

With so many people busy counting the dead, the injured often get relegated to the footnotes of this story; like Rasool Bacha, who was fast asleep in his home in Dattakhlel, a small village close to the Afghan border, when he was struck by shrapnel from a drone attack this past January.

“Later in the morning I discovered that the strike had also killed four of my neighbours,” Bacha told IPS in the hospital where he is currently undergoing physiotherapy after surgery.

“All the victims were poor farmers,” he added, “and had no relation to the militants. It is simply not true that the drones kill only militants – when they rain down they destroy everything that comes in their way.”

Every day, eight to 12 unmanned aircrafts hover in the sky, he said. “We watch them all day long in fear, even though we know that most attacks happen after sunset.”

While residents are mainly concerned with the immediate threat to their daily lives, political parties have seized on widespread discontent to advance their position that the attacks constitute an assault on national sovereignty.

Following the latest series of strikes – that killed the deputy chief of the outlawed Tehreek Taliban Pakistan (TTP), Waliur Rehman, on May 29 in North Waziristan – Pakistan’s newly elected Prime Minister Nawaz Sharif labeled the attack “a violation of international law” and urged the United States to “respect the sovereignty of other countries.”

On Jun. 4, the PTI – which formed a coalition in Pakistan’s northern Khyber Pakhtunkhwa (KP) province after winning a landslide victory in the May 11 general elections here – submitted a resolution to the KP assembly condemning, and calling for an immediate cessation of, the attacks.

Echoing Sharif’s words on sovereignty, PTI Spokesperson Shaukat Ali Yousafzai was quick to point out that his party was the first to take up the issue as far back as May 21, 2011 following a strike that halted a NATO convoy heading for Afghanistan through the KP.

He told IPS his party also held a rally in Waziristan, whose population has borne the lion’s share of the attacks.

As elections draw nearer, other parties keen to “exploit anti-American sentiments and muster electoral support” are also stepping up opposition to the U.S. strikes and a planned operation to cleanse border areas of militants, according to Muhammad Azeem, former mayor of Mardan, one of 25 districts that comprise the troubled KP province.

He told IPS that the political grouping Muttahida Majlis e-Amal (MMA), which gathered various religious parties under one banner to win a sweeping victory in the 2003 elections, governed the Khyber Pakhtunkhwa and the southeastern Balochistan province until it fell out of favour with the Taliban in 2008.

Now, parties like the Jamaat Islam (JI) and Jamiat Ulemai Islam (JUI) have taken up the cudgels on behalf of civilians living in terror of drone strikes, and have promised to guard tribal populations from a military offensive by the government.

But as political analyst Javid Hussain pointed out, this military operation against which parties are now crying foul has been ongoing in all seven agencies of the Federally Administered Tribal Areas (FATA) since 2005, leaving 300,000 of the region’s 5.8 million people homeless.

“None of the political leaders bothered about it until now,” he told IPS, adding that politicians are only interested in the issue of drones insofar as they pay dividends in the election.

Earlier this month, the Peshawar High Court declared drone strikes illegal and asked the government to move a resolution against the use of drones in the United Nations, Muhammad Arif, political science lecturer at the Abdul Wali Khan University Mardan, told IPS.

The court made its announcement in response to a legal petition filed last year by the Foundation for Fundamental Rights, an Islamabad-based legal charity, on behalf of the families of up to 50 people killed when missiles stuck a tribal gathering, or jirga, in March 2011.

“The National Assembly has passed several resolutions terming these aerial attacks unlawful, and demanding that they be stopped, but they continue unabated,” Wali Khan said.

On May 23, the tribal population was further disappointed when U.S. President Barack Obama made it categorically clear that drones will continue to target “Al Qaeda and its affiliates” because they killed U.S. citizens.