The Political Drones Get Louder 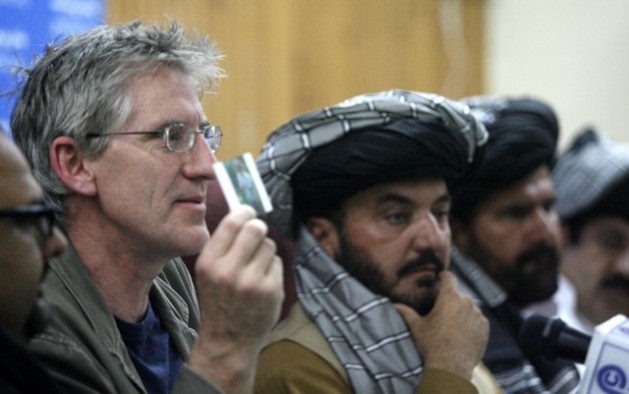 PESHAWAR, May 17 2012 (IPS) - Growing numbers of activists are beginning to counter U.S. Drone attacks into Pakistani territory. The activists are confronting the U.S., but increasingly now the Pakistani government for allowing such attacks to continue.

The Tehreek Insaf party led by former Pakistani cricket captain Imran Khan first stepped up the political heat against the Drones. Civil society groups, including Pakistani lawyers, and now also groups from the U.S. and Britain have joined the campaign.

“We believe Drone strikes are illegal according to international law because they kill innocent people,” Imran Khan told IPS from Islamabad. “The U.S. or any other country has no right to violate frontiers of an independent state.”

The cricketer-turned-politician blames the Pakistani government for its “indifference” to the killing of innocent tribesmen in the Drone attacks. “They have sold out our sovereignty to our enemies.”

“A Drone attack killed the first ever head of outlawed Tehreek Taliban, Neik Mohammad Wazir in 2004,” Prof Ziaullah at the Government College in Charsadda, one of 25 districts of the border state Khyber Pakhtunkhwa told IPS. “But lately attacks have assumed political dimensions largely due to Khan’s protests.”

On Mar. 13, the National Assembly passed a resolution against Drone strikes in the border areas. Civil society activists are now pressuring the Pakistani government to do more to block such attacks.

The Foundation for Fundamental Rights (FFR), a Pakistan based legal charity, filed two constitutional petitions last week before the Peshawar High Court against the Federation of Pakistan, the Ministry of Foreign Affairs and the Ministry of Defence among others for failure to stop the attacks on Pakistan.

One petition is on behalf of victims of a Drone strike on members of a Jirga (council) on Mar. 17 last year. The second petition was filed by Noor Khan, whose father Malik Daud Khan, head of the North Waziristan Loya Jirga, was assassinated along with 50 other tribal elders and others last year by CIA operated Drones.

Shahzad Akbar acting on behalf of the victims told media representatives at the launch of the petition that Malik Daud Khan was a respected member of the local community and head of the North Waziristan Loya Jirga, a peaceful council of local elders. He is arguing that such attacks are illegal.

British human rights lawyer Clive Stafford Smith also addressed the press conference. “The first role of any government must be to protect its own citizens from harm, when they are innocent of any crime,” Smith said. “If my child were killed by a Predator Drone in the English countryside, I would expect there to be very serious and immediate consequences. A Pakistani child should enjoy the same protection.”

Smith, whose organisation Reprieve is reported to have helped secure the release of 65 prisoners from Guantanamo Bay, said: “We can kill people without any risk to ourselves and that’s why the politicians like it.”

FFR works with Reprieve in campaigning on behalf of Drone victims. Reprieve has filed a similar petition in London seeking an end to the involvement of British secret services in Drone strikes in Pakistan. Reprieve and FFR have also filed a complaint before the UN Human Rights Council.

As of May 6, in all 2,193 people have been killed in 230 Drone strikes in Pakistan’s border regions of North and South Waziristan. Most of those killed have been Al-Qaeda and Taliban leaders who had taken refuge after dismissal of their government in Kabul.

U.S. officials say the region is now the international headquarters of Al-Qaeda. John Brennan, the top counter-terrorism adviser to U.S. President Barack Obama told a meeting in Washington early this month that rigorous standards were applied to such attacks, and they were being carried out with laser-like precision.

He said nothing in international law prohibits the U.S. from using lethal force against enemies outside of an active battlefield.

Activists are challenging such claims. Nancy Maneiar, a peace activist with the U.S.-based anti-war Code Pink Group told a meeting in Washington Saturday last week, “We apologise to the people of Pakistan for the strikes that have killed so many civilians. The CIA needs to be held accountable for their strikes.” (END)