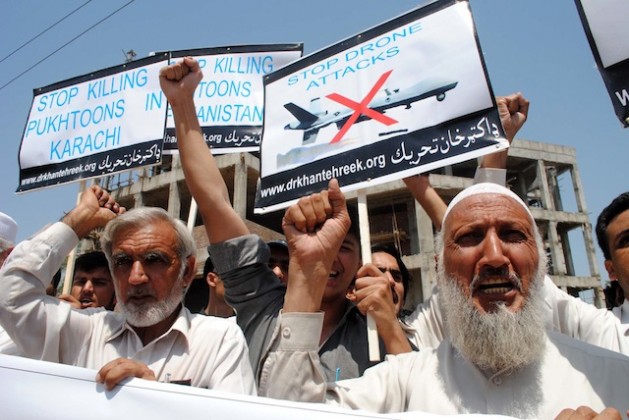 A protest in Peshawar against drone strikes. Credit: Ashfaq Yusufzai/IPS.

PESHAWAR, Pakistan , Sep 13 2012 (IPS) - Political parties are stepping up opposition to the U.S. drone strikes and a planned operation to cleanse border areas of militants.

“Till now only the Imran Khan-led Pakistan Tehreek Insaf (Movement for Justice Party) staunchly opposed the U.S. drones and the military campaign in Waziristan,” Muhammad Azeem, former mayor in Mardan, one of the 25 districts of the troubled northern Khyber Pakhtunkhwa province told IPS. “As elections get nearer, the other parties are also now trying to exploit anti-American sentiments and muster electoral support.”

Drones have been hitting targets in the northern border areas of Pakistan, such as Khyber Pakhtunkhwa and the Federally Administered Tribal Areas (FATA) governed directly by the federal government.

Elections are due in Pakistan next year.

The religio-political parties under the banner of Muttahida Majlis Amal (MMA) swept the election in 2003 due to their Taliban connection, and formed governments in Khyber Pakhtunkhwa and Balochistan province.

After coming to power in these provinces, they abandoned the Taliban and were eliminated in the 2008 election.

Now both the major religious parties – Jamaat Islam (JI) and Jamiat Ulemai Islam (JUI) – have come out of hibernation to play upon anti-American sentiments and denounce the government’s planned operation in Waziristan, which falls within FATA.

On Sep. 5, JI chief Munawar Hassan told a rally in Nowshera town in Khyber Pakhtunkhwa that his party will not let the government launch a military offensive in Waziristan.

“American agents want to create unrest in the country by pushing the army for a North Waziristan operation but we won’t let that happen,” he told the rally where banners carried slogans against the U.S., and against Pakistani rulers.

“The military operation is in progress in all seven agencies of the Federally Administered Tribal Areas since 2005 but none of the political leaders bothered,” political analyst Javid Hussain told IPS.

He said Pakistan’s solidarity, freedom and autonomy were at stake due to the interference of the U.S. and its allies in local affairs.

JUI head Maulana Fazlur Rehman likewise has been criticising the U.S. in his public meetings and press conferences.

On Sep. 3, Rehman told a news conference in Islamabad that “we won’t abandon the tribal residents if the military campaign is launched there.”

Even the smallest political parties have realised that opposition to the military operation and the drone strikes could pay dividends in the election.

“Drone strikes are against the country’s sovereignty,” Dr Ikramullah Khan of the Swabi Qaumi Mahaz party told IPS. “These have killed innocent women and children, which is against the United Nations charter and conventions.” He said the impending military action in North Waziristan would spell disaster.

About 300,000 of the population of 5.8 million in FATA have been displaced by military operations, Dr Ikramullah Khan said. Military action in North Waziristan would make more people homeless and bring no results, he said.

Chief of the ruling Pakistan Peoples’ Party (PPP) Aftab Ahmed Khan said use of force has fed terrorism in tribal areas and elsewhere.

“We would never allow the government to launch military action in North Waziristan because it would produce more terrorists rather than paving way for peace,” he told IPS.

The prevalent unrest in FATA could be resolved by dialogue, he said. The military action would affect the poor population who had already been suffering heavily from the military operations, Aftab Ahmed Khan said.

President Asif Ali Zardari from the PPP, widower of Benazir Bhutto, is using delaying tactics to start the North Waziristan operation despite U.S. pressure. The Pakistan Muslim League (Nawaz) also wants the government to stay away from the operation and adopt the path of dialogue.

Staunch opponent of drone strikes and the military operation Imran Khan has gone a step further.

“We will hit drones when I become prime minister,” Imran Khan told IPS from Dubai. “Talks are the only solution to the problem in Waziristan and elsewhere,” he said.

“We will enter Waziristan with 100,000 people on October 6,” he told a news conference in Islamabad earlier on Aug. 30. “I would take international media to let them know the quantum of destruction caused by drone attacks.”

The government should step down if it cannot protect the lives of common people, he said.

The U.S.-led war on terror is increasing terrorism and there was no end in sight, he said. “Killing innocent people in drone strikes and military operations will produce terrorists.”

The Awami National Party, a bitter opponent of the Taliban, is also hesitant to support drone strikes. “Drone strikes are against the country’s sovereignty and we would never support them,” ANP leader Bashir Ahmed Bilour told IPS.