During the 20th Session of the U.N. Human Rights Council in Geneva from Jun. 18 to Jul. 6, these experts declared such measures in urgent need of greater accountability and transparency.

Targeted-killing programs, including drone strikes, are “a strongly asserted but ill-defined license to kill without accountability”, wrote former special rapporteur on extrajudicial, summary or arbitrary executions Philip Alston in his 2010 report to the council. 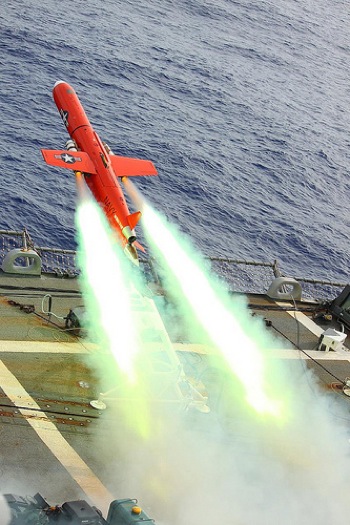 A drone launches from the deck of the USS Lassen. The legality of U.S. drone strikes is coming under increasing scrutiny and questioning. Credit: Official U.S. Navy Imagery/ CC by 2.0

Two years later, strategies that the United States justifies as a necessary response to terrorism remain questionable both in legality and according to humanitarian principles.

Used by the United States in Afghanistan, Pakistan, Yemen and elsewhere, drones have quickly become the counterterrorist weapon of choice. Accompanying drone strikes is collateral damage – military terminology for civilian casualties – which has subsequently become a central issue.

Drone technology itself is not inaccurate. But targets are often imprecise, as they are based on intelligence pinpointing suspected terrorists or areas of suspicious activity. Ensuring that innocent bystanders are absent from populated areas where terrorist activity has been identified is a challenge that all airborne military operations face.

In Pakistan, many civil rights activists vehemently oppose U.S. drone attacks. Among them is former cricketer Imran Kahn, leader of the Tehreek-e-Insaf party, who believes drone attacks are illegal on the grounds that they kill innocent civilians.

At the Human Rights Council Tuesday, Christof Heyns, current special rapporteur on extrajudicial, summary or arbitrary executions, called for more transparency and accountability from the United States. He urged that a framework be developed and adhered to, and pressed for accurate records of civilian deaths.

According to a recent report in the New York Times, the U.S. government’s current method for counting civilian deaths takes an exceptionally broad view of legitimate targets, deeming all males of military age to be terrorist combatants.

This methodology goes some way towards explaining the gulf between the calculations of independent media reports and official figures, which claim that civilian casualties are minimal.

An Associated Press investigation found that “the drone strikes were killing far fewer civilians than many Pakistanis are led to believe and that a significant majority of the dead were combatants”. Other reports, however, estimate hundreds of civilian casualties in the Pakistani region.

“The United States has cobbled together its own legal framework for targeted killing, with standards that are far less stringent than the law allows,” Hina Shamsi, director of the National Security Project of the American Civil Liberties Union (ACLU), told the council Wednesday.

Shamsi also took issue with the lack of transparency of military programs based on “a secret legal criteria, entirely secret evidence, and a secret process”, she said.

In defence of its policy of secrecy, the U.S. government filed a 50-page brief just before a midnight deadline, Wednesday, which stated that “whether or not the CIA has the authority to be, or is in fact, directly involved in targeted lethal operations remains classified”.

The report came in response to a lawsuit filed by the ACLU last year, which requested transparency on the killing of three American citizens in Yemen last year.

“The international community’s concern about the U.S. targeted killing program is continuing to grow because of the unlawfully broad authority our government asserts to kill ‘suspected terrorists’ far from any battlefield, without meaningful transparency or accountability,” Shamsi told IPS.

The lack of a legal framework allows for drone strikes to be implemented at will, in non-conflict zones and on the basis of loosely defined terrorist threats, without permission from the host nation.

“I think we’re in for very dangerous precedents that can be used by countries on all sides,” Heynes, the special rapporteur, said, voicing his concern regarding legal loopholes.

“In essence, drones cancel out national sovereignty,” Tom Engelhardt, co-author of Terminator Planet: The First History of Drone Warfare, 2001-2050, told IPS. “The rules of the game are one country’s sovereignty trumps that of another.”

It is estimated that more than 50 nations have drones, are developing them, or are planning to buy them.

Citing a recent contributor to his blog, TomDispatch, Engelhardt described the unmanned aircraft as  “a technology that has morphed into a policy”.

In a written speech submitted to the council, John Brennan, U.S. counterterrorism chief, deemed the use of drones a legal, ethical and wise way of conducting sensitive counterterror operations.

According to Dyke Weatherington, deputy director responsible for acquisition oversight for the Department of Defence’s Unmanned Aircraft Systems (UAS), “combatant commanders and warfighters place value in the inherent features of unmanned systems – especially their persistence, versatility, and reduced risk to human life.”

But disregarding national boundaries and the inability to distinguish innocent civilians from terrorists in targeted vicinities render drones a questionable means of countering terrorism.

In a report to the council Wednesday, Ben Emmerson, special rapporteur on the promotion and protection of human rights while countering terrorism, underscored the U.N. General Assembly’s consensus that counterterrorism measures that abuse human rights actually help spread terrorism.

The deaths of innocent civilians alienate communities and hand terrorists a propaganda tool that can bolster recruitment.

“Human rights abuses have all too often contributed to the grievances which cause people to make the wrong choices and to resort to terrorism,” according to the unedited document.

“The Special Rapporteur strongly believes that human rights compliant counter-terrorism measures help to prevent the recruitment of individuals to acts of terrorism.”

Heyns urged compliance with humanitarian law through “strategies applied to prevent casualties, as well as measures in place to provide prompt, thorough, effective and independent public investigation of alleged violations”.

Nevertheless, he told reporters at the council’s meeting, “I don’t think we have the full answer to the legal framework; we certainly don’t have the answer to the accountability issues.”