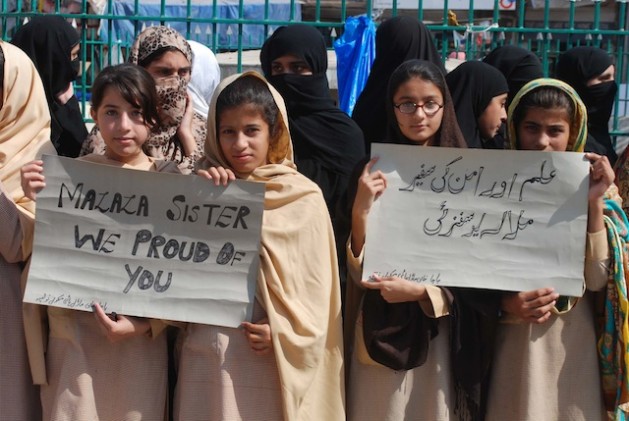 PESHAWAR, Oct 12 2012 (IPS) - Shazia Begum, one of three girls injured in the attack on the Pakistani schoolgirl Malala Yousafzai says the Taliban had sought to silence a very influential schoolgirl.

“Malala is a source of inspiration for all of the students in Swat,” Shazia Begum told IPS at the Combined Military Hospital in Peshawar where she is being treated. “She encouraged us to get education when the Taliban banned it.”

Malala, 14, who suffered gunshot injuries to her head in the attack in Swat Oct. 9 is recovering in hospital in Rawalpindi to which she was moved. She remains in serous condition.

“Her articles on the BBC gave us hope and enhanced our love for education. It was because of her that thousands of girls attended schools despite Taliban’s opposition,” Shazia Begum told IPS.

Khyber Pakhtunkhwa (KP) Information Minister Mian Iftikhar Hussain told IPS that Malala had helped the government bring girls back to school when the Taliban were trying to slam the doors of education on them.

Despite being on the hit list of Taliban she never missed going to school, and this encouraged female students in the violence-wracked Swat, Hussain said.

Swat, one of the 25 districts of Khyber Pakhtunkhwa province, remained under Taliban control from 2007 to 2009.The Taliban destroyed about 500 schools in that period, depriving about 80,000 students of an education. The Taliban were evicted following a military offensive in 2010.

“Everyday Taliban hanged bodies of their opponents from electricity poles after executing them,” lawmaker Bushra Gohar told IPS. “The residents of Swat kept silent due to reprisals by Taliban but Malala proved a blessing not only for men but also for women.”

Pakistan Tehreek Insaf chairman Imran Khan who visited the hospital Oct. 10, said Malala was braver than all men. “When all the people went into hibernation due to Taliban fear, she remained steadfast and served as beacon of hope for fellow students,” Khan said.

Her outspoken criticism of militants had earned the wrath of the Taliban but she refused security, which speaks of her matchless bravery, he said.

Threats to Malila’s life increased manifold when she received the National Peace Award in recognition of her services for education and peace in December 2011. She was also among the nominees for the International Children’s Peace Prize. She is the first Pakistani girl nominated for that award.

Malila joined her father Ziauddin Yousafzai, an educationist and social activist, in supporting a peace deal in 2009. But instead of laying down arms, militants began to operate from the adjoining Buner district. Malila and her family were among those displaced in the violence.

Malila wrote of her experiences in that period under the pen name Gul Makai.
Khyber Pakhtunkhwa Information Minister Mian Iftikhar Hussain has announced a 10 million rupee (105,000 dollars) award for information leading to the arrest of individuals who attacked Malala Yousufzai. He said the Khyber Pakhtunkhwa government had offered to bear all expenses for her treatment here or abroad.

“We will trace the terrorist who shot Malala and will bring her attackers to justice. They will not survive for long,” he said. The Taliban militants, he said, had started attacking children, which was a sign of weakness and desperation.

He said the government would provide security to her family because the terrorists could hit them any time.

School students all over Khyber Pakhtunkhwa province have been moved by the attempt to kill Malala. A barrage of demonstrations have been condemning the barbarism of the Taliban.

“We are deeply shocked by the attack on Malala who is our sister. We would follow her in struggle against militancy and protection of schools,” Spogmay, a student of University Model School in Peshawar told IPS. Holding a banner to condemn the incident during a protest demonstration, she said students would stand like a rock to safeguard their schools.

Militants can attack the schools with bombs but they cannot weaken the students’ beliefs, she said.

The Taliban have been targeting schools in Khyber Pakhtunkhwa and in the adjacent Federally Administered Tribal Areas since 2008. “Those getting English and modern education in the schools are not Muslims. Girls education in not allowed in Islam, therefore, the Taliban wouldn’t allow these schools,” Taliban spokesman Ihsanullah Ihsan told reporters.

Some attacks on school buildings have continued. “The schools are destroyed mostly during night. They plant explosives which damage the schools,” Khyber Pakhtunkhwa education minister Sardar Hussain Babak told IPS.

Babak said that they will build 100 new schools for every one that the militants destroy. He said the government had allocated 460.4 million dollars for promotion of education over the next two years.

The government is particularly promoting education for girls, he said. “We are paying more attention to female education as they had been suffered at the hands of Taliban militants,” he said.

About 200 schools damaged by the Taliban have been reconstructed in Swat while students from the rest manage in tents.

On Friday, the schools across the province remain shut to show solidarity with Malala and to offer prayers for her early recovery.