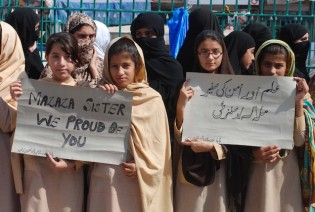 By Gordon Brown
Less than two weeks after being left for dead by the Taliban, Malala Yousafzai is standing up on her own two feet.

By Ashfaq Yusufzai
Shazia Begum, one of three girls injured in the attack on the Pakistani schoolgirl Malala Yousafzai says the Taliban had sought to silence a very influential schoolgirl.
ADVERTISEMENT ADVERTISEMENT