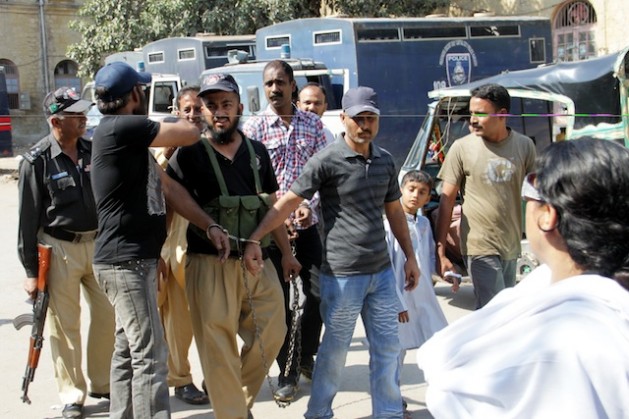 Handcuffed prisoners are escorted to the City Courts in Karachi to stand trial. Credit: Adil Siddiqi

KARACHI, Nov 11 2012 (IPS) - Violence and crime are on the rise in Pakistan and none are more at risk than those who witness murders, robberies, abuse or kidnapping first-hand.

An acute lack of protection for eyewitnesses – crucial players in any criminal justice system – has spurred rights activists and top-level politicians to lay the groundwork for a comprehensive witness protection programme.

Observing that a major hindrance to effective prosecution was witnesses backing out due to pressure from the accused parties, President Asif Ali Zardari, presiding over a law and order meeting in Karachi earlier this month, directed the Sindh government to work on legislation that guarantees witnesses’ safety.

The Sindh government has already tabled a witness protection (WP) bill in the provincial assembly that is currently being vetted.

“But,” said Sharfuddin Memon, consultant with the Sindh Home Department and former head of the Citizens-Police Liaison Committee (CPLC), an organisation working closely with Karachi’s police and the provincial government, “It’s not just vital for Sindh or Karachi alone, it should also be established all over Pakistan,” he told IPS.

With a population of over 18 million people, Karachi has seen an unprecedented spike in violence since the beginning of the year.

A Practical Plan – or a Hollywood fantasy?

Experts like Hasan are sceptical about the success of the WPP and believe it could “only work well in Hollywood movies”.

“It requires a huge and continuous supply of funds. Relocating and giving new identities not just to the witness but to entire families is impossible.”

“India, too, has a WPP, which it finds very difficult to implement,” Awan acknowledged.

Memon believes the police force needs to be elevated along with implementation of a new programme.

At the moment Karachi has an inadequately trained, demoralised and politicised police force of 33,000, of which 12,000 are deployed on “special duties” such as escorting VIPs.

This means there is only one policeman for every 900 people.

“Political corruption and favouritism is a big problem, from recruitment right up to the point of postings and promotions,” said Hasan.

This can be solved, according to Rizvi, by consistent “enforcement of the law, regardless of the political group involved in the breach of peace.”

But this is a tall order for Karachi, a city whose wheels are oiled by bribery, political favours and corruption.

Naeem Sadiq, a safety and environment consultant, has an altogether different view on how to stem violence.

He believes purging the city of weapons is the “only way Karachi and Pakistan can see an almost 90 percent reduction in violence and killing”.

Sadiq recently filed a petition in the SCP urging the apex court to de-weaponise the city. “The trick is to remove the root source of violence,” he told IPS.

“Differences of opinion are human nature; however, remove the primary instrument that is used for conflict resolution and people will have no choice but to dialogue.”

Karachi is home to nearly 1.2 million weapons. Karachi’s Crime Investigation Department has a record of around 50,000 licenced weapons carriers in the city.

In the first eight months of 2012, 1,345 people were violently murdered, compared with 1,715 in the whole of 2011, according to the Human Rights Commission of Pakistan, which cited criminal gangs and “political patronage” as major culprits in the wave of bloodshed.

Independent research conducted by Al-Jazeera English, comparing Karachi to the Brazilian city of Sao Paulo in the mid-2000s, when it was steeped in organised crime and drugs, has put Karachi at the top of a list of 13 cities with the highest homicide rates in the word.

Though crime statistics in Pakistan are well known, few culprits are caught and those who are apprehended are quickly released.

Last July the Supreme Court of Pakistan (SCP) acquitted Malik Ishaq, leader and founder of Lashkar-e-Jhangvi (LeJ), a proscribed militant outfit with links to al Qaeda, for “want of evidence”.

He had allegedly been involved in some 70 homicide cases in addition to being accused of inciting sectarian hatred and masterminding an attack on the Sri Lankan cricket team in 2009.

Ishaq was released on bail after serving a jail term of nearly 14 years. He was acquitted 34 times on charges of culpable homicide and terrorism.

His brother in arms, Akram Lahori, also arrested eight years ago, has not yet been convicted.

Two of the three key witnesses in Lahori’s case have disappeared while one turned hostile, refusing to identify any of the suspects.

Despite the Sindh province having set up anti-terrorist courts (ATCs) for speedy resolution of such cases, the conviction rate is still an abysmal 26 percent.

Talking to IPS, the prosecutor general of Sindh, Shahdat Awan, said that a total of 1,329 cases were pending before 11 ATCs in the province, of which 43 cases occurred in the years between 1999 and 2006.

Linking the high rate of acquittal – almost 73 percent – to weak investigation and witnesses’ habit of retreating or surrendering truth in favour of lies, Awan said existing procedures and mechanisms need to be strengthened while the new protection programme is rolled out.

“It would pay to invest in improving the capacity of the police, provide them legal education or, better still, recruit investigation officers who are law graduates instead of those who only have a Grade 12 or 14 education level,” he stressed.

One of Karachi’s leading criminal lawyers, Farrukh Zia Shaikh, told IPS that the courts are over-burdened with pending cases and adjournments have become the norm. “There is heavy reliance on witnesses, who often decide to remain silent or make a statement that is favourable to the accused because they are scared of the consequences,” he said.

In addition, he complained that often the first information report (or FIR, which is prepared by the police upon receipt of information about an offence) is full of errors or incomplete.

“Often the evidence is tampered with or the confessional statement from the accused is either not recorded properly or obtained under torture or duress,” he said.

Even the apex court, which is currently looking into Karachi’s law and order implementation case,  noted the government’s lackadaisical attitude earlier this month.

The additional inspector general (AIG) for the Sindh province informed the court that over 35 criminals who were released on parole for two years in 2003 had not been brought to trial.

Of the 2,381 criminal cases registered last year, only 761 people were arrested while 3,461 suspects are still absconding.

“How can law and order improve when more than 3,500 murderers and criminals are roaming freely in the city without any fear of arrest or prosecution?” asked an incredulous Justice Khilji Arif Hussain, chiding the state for its inaction.

“The criminals know they will never be charged and if they do, they will manage to get released,” Haider Abbas Rizvi, spokesperson of the Muttahida Qaumi Movement, the leading political party in Karachi, told IPS over the phone from Islamabad.

“Crime and criminal elements are bound to flourish,” he added, endorsing the absolute need for a witness protection programme.

The Home Department has already set up a witness protection cell to provide full support to those who come forward to identify criminals. From simply providing police protection to more extreme measures like facilitating a full identity change and relocation, even abroad, the cell seems to have thought of everything.

However, these good intentions need a stamp of approval at the national level in the form of a Witness Protection Bill, which has already been submitted for parliamentary approval.

But it is not just witnesses who need protection.  Even lawyers and judges are at risk, particularly in controversial cases.

Police, too, are often intimidated, even killed, according to S. Raza Hasan, a crime reporter working for the English-language daily ‘Dawn’.

“In the case of journalist Wali Khan Babar, who was murdered in Karachi in 2011, at least four witnesses – two of whom were policemen – have been killed,” said Hasan. According to police sources, of the 124 policemen killed in the line of duty in the last ten months, 98 were from Karachi.

Last year the death toll of policemen in the Sindh was 80 and 57 for Karachi. Since the 1990s, Awan estimates the total figure to be over 800.

Memon assured that the WPC, if approved, would provide protection for police as well as the judiciary and “anyone cooperating in apprehending the criminals”.