RIO DE JANEIRO, May 26 2011 (IPS) - Despite the risks involved, a man who is under the witness protection programme in Brazil and his wife decided to tell their story to IPS, to denounce flaws in a system that, in their case, has added neglect and isolation to the total anonymity in which they must live. 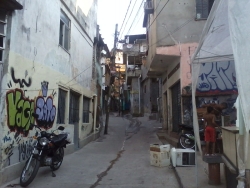 A street in a "favela" or slum in the Complexo do Alemão. The militias are no longer active here, but do operate in nearby neighbourhoods. Credit: Fabíola Ortiz/IPS

On Aug. 5, 2007, MAA was shot twice in the stomach, once in the shoulder and once in the leg outside the doorway to his house on the west side of Rio de Janeiro. The order to kill him came from the “justice league”, one of dozens of militias made up of police, security agents, members of the military and fire fighters who extort local residents in many neighbourhoods.

After putting up with extortion and abuses from the group for so long, MAA knew too much.

When he was released from hospital, he had to hide until he decided to give a statement to prosecutors and enter the federal witness and victims’ protection programme, PROVITA. Today he is 48 years old.

“I knew there was a plan to kill me,” MAA told IPS in the apartment where he is temporarily living, in southeast Brazil. “After the murder attempt, I took shelter on my brothers’ farm. I had no other alternative, and I didn’t have any money, and my family was going to be targeted.”

The “justice league” and other militias are active in many neighbourhoods in Rio, especially in the north and the west. The groups emerged in recent years under the pretext of fighting drug trafficking but actually became new players in the drug trade, while imposing their own rules and demanding that local residents and shopkeepers make “protection” payments and pay for illegally provided services like security, transportation, electricity, cooking gas and cable TV.

When MAA (his initials) entered PROVITA, his life and the lives of his wife and their two teenage children underwent a radical change.

On Dec. 21, 2007 he signed an agreement pledging to live up to the programme’s rules. “We quickly said good-bye to our family and left,” said the witness, who has not seen his parents or siblings again.

They left behind the city where they had always lived, along with their plans and dreams for the future.

It wasn’t just that they had to move away. Uprooting themselves at a moment’s notice, without leaving a trace, whenever they received a warning from PROVITA became routine. They have so far moved to four different cities, to avoid being tracked down.

MAA, a lawyer and retired member of the military police, and his wife, a business administrator, had a comfortable middle-class lifestyle in which they could afford health insurance and a private school education for their children.

But after they entered PROVITA, they were no longer able to exercise their professions, and for a living they depend on the delivery of MAA’s pension payments by the non-governmental organisation that administers the witness protection programme.

Although PROVITA is a federal government programme, it is run through agreements with the states and non-governmental organisations, which are in charge of providing assistance to the protected witnesses.

“I was really scared of being tortured, and of dying. I’m not anymore,” said MAA’s 42-year-old wife MR. “I’m only afraid for the future of my children. We can’t tell our story, no one knows about us. We have to lie all the time, and even if we make friends, we can’t tell the truth.”

They have been deprived of many things: they can’t talk about their past or reveal their real identity to anyone. They can’t use the computer or the Internet, have a bank account, drive a car, or even talk on the phone. And they always have to lie about where they are from.

But more painful than these rigid rules is the scornful treatment they receive from the programme, they said.

Because of the bullet wounds that MAA received, he required intestinal reconstruction surgery. But he was not given the operation until six months later, when it was too late. By the time he underwent surgery, he was once again on the verge of death, and he lost his large intestine, he said.

“I’m still waiting for compensation for my health problems,” he added.

The delivery of the funds they need to survive is also frequently delayed by red tape, they said. Nor are they able to communicate with the heads of the programme, and they are not given legal, social or psychological assistance, they complained.

For speaking out and violating the confidentiality clause of their agreement with PROVITA, MAA and MR know they can be kicked out of the programme and left on their own. But the need to get their story out was even stronger than their fear of being left without protection.

They are one of the nearly 80 families from Rio de Janeiro who are under protection from the state. Nationwide, there are 1,200 witnesses who are receiving protection.

According to the heads of PROVITA, the programme has been 100 percent effective in the 15 years since it was founded: none of the 4,500 people under its care have been killed.

MAA and his family are not typical members of the programme, who tend to be poor.

When the order to move arrives, they often spend months living out of hotel rooms, without protection, waiting to be assigned rental housing.

The last time, the family was given one night’s warning to pack up and move to another city in the northeast, carrying just three days worth of clothing, and had to spend nearly two months in a hotel until MR decided to find an apartment on her own for them to rent.

The belongings that they left behind on that occasion took several months to arrive, and had been ransacked along the way. They were able to salvage very few things and once again had to purchase furniture and household items. They have not received reparations for this either.

And MAA and his wife say they suffer discrimination and intimidation from the PROVITA staff themselves, who treat them “like criminals.”

“We already filed complaints in 2009, and suffered intimidation and threats of being removed from the programme. We’re treated as if we were criminals. It’s psychological torture. We feel like we’re in exile, without the rights of citizens in our own country.”

The health coverage, they say, is limited to prescriptions of high doses of antidepressants and other prescription drugs, although psychological assistance would appear to be indispensable.

Their children have had a hard time adapting to new schools every time they move, which generally occurs in the middle of the school year. They have had to repeat grades because of missing months of schooling.

The uncertainty of not knowing where and when they will be moving has caused problems for their children, MAA says. Not only do they have learning disabilities and problems socialising, but they have symptoms of depression and suicidal tendencies, he said.

“We are really worried about the future of our kids. I can’t work, even as a self-employed professional, which is really frustrating. The only thing I can do is stay at home,” said MR.

In the three bedroom apartment where they live, the brightly coloured walls with simple decorations stand in for a real home.

After five moves in four different cities, the couple do not want to leave the peaceful southeastern town of 50,000 people where they are now living.

MR hasn’t had news of her family for years either, and she cries every day. “My body aches, I miss them so much,” she said.

“We were naive to believe in the programme,” she added. “They stole our futures from us and didn’t help us reinsert ourselves in society.”

Nationwide, witnesses are to be covered by PROVITA for two years. But the decentralised administration of the programme means each state adopts its own rules. The policy is for witnesses or victims to remain covered until they no longer face any threat.

“We are now in a process of getting back to some sort of life, but we have been outside the labour market and we need support to help us get a job,” MR said.

She hopes her children will complete secondary school and that she and her husband can build a life “from scratch,” at a calmer pace and without risks.

Returning to Rio is impossible, though.

When MAA offered to testify as a witness, in December 2007, the authorities arrested the heads of the “justice league”. But because they have high-up contacts, they should soon be able to make it out of prison thanks to sentence reduction or commutation mechanisms.

The militias are now active in more than 300 neighbourhoods in Rio de Janeiro, state legislator Marcelo Freixo of the Socialism and Freedom Party told IPS. In 2008 he chaired a parliamentary inquiry into the paramilitary groups.

Fewer than 10 percent of homicides are solved in Rio, according to Freixo. “Witnesses are often the only proof in a criminal investigation.”

“I’m not going to give up, because it is the state’s duty to keep us safe,” said MAA. “I just want to be treated as a citizen. Safety and protection aren’t a business deal, but a right. Today we are surviving and we are protecting ourselves,” he said.