KARACHI, Aug 6 2012 (IPS) - As millions around the world enter the third week of the Ramadan fast, the fraternity that typically unites Muslims during the holy month does not extend to Pakistan’s Ahmadi community, which is facing worse persecution than ever before. 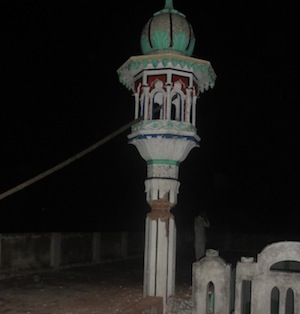 One of the minarets of Baitul Hamd in Kharian, in the process of being demolished. Credit: Ahmadiyya Jammat

What little space there might once have been for this religious minority – who believe that their founder, Mirza Ghulam Ahmad of Qadian, is the promised messiah and reformer whose advent was foretold by the Holy Prophet Muhammad – is quickly disappearing altogether.

“What space for Ahmadis are you talking about? They don’t have any,” Faisal Neqvi, a Lahore-based lawyer, told IPS.

Declared non-Muslims in 1974, the legal and social exclusion of Ahmadis was further enshrined in a 1984 law that prohibits them from proclaiming themselves Muslims or making pilgrimages to Saudi Arabia.

While non-Muslim missionaries are permitted to proselytise as long as they do not preach against Islam, Ahamdis cannot even hold a public congregation or sing hymns in praise of the prophet.

Last month, hostility towards the community of four million bubbled over in Kharian, a city in the Punjab province, when a police contingent demolished six minarets of an Ahmadi mosque, Baitul Hamd, and effaced the calligraphy on its walls.

Raja Zahid, the police officer who supervised the demolition squad, told the Express Tribune, an English daily, that the act of destruction was carried out following a formal complaint from a religious organisation called Tehreek-e-Tahaffuz-e-Islam .

According to Zahid, there was a mutual understanding that the demolition would take place.

“We made sure that we were respectful, but the law 298-B clearly states that Qadianis (Ahmadis) cannot call their worship place a ‘mosque’, and if it cannot be called that, then it cannot resemble the mosque either,” said Zahid.

An incensed Ahmadiyya Jamaat spokesperson, Saleemuddin, told IPS, “There is no patented design for a mosque or a law that states that a minaret of a certain design can only be used by a mosque.”

In fact, Baitul Hamd was built in 1980, four years before the Ahmadis were barred from calling themselves Muslims.

Disputing the police statement, Saleemuddin told IPS, “They (the police) came without a court order in the thick of the night.”

Ahmadiyya community leaders have reported that their mosques and community lands are routinely confiscated by local governments and given to the majority Muslim community. There have been instances where authorities halted construction or renovation of these places of worship.

“It all originates from the laws introduced in the early 80s when it became a crime for an Ahmadi to use any symbol or words that might indicate he/she is a Muslim,” Zohra Yusuf, chairperson of the independent Human Rights Commission of Pakistan, told IPS.

The law is taken to such an extreme that “once, a child who was just a few years old was sent to prison because he received an invitation card that used the word ‘Bismillah’ (meaning ‘in the name of God’)”, Yusuf added.

Religion, and with it religious intolerance, has crept into almost every state institution in Pakistan. But while many decry the persecution of Shia Muslims, Hindus and Christians, few speak out about the Ahmadiyya, who are hounded on a regular basis.

Fearing persecution, they have kept a low profile for years. “While people remain unaware of your identity, you are safe,” Hasan Ahmad, a medical student, told IPS. “But once people find out you’re an Ahmadi, the attitude changes completely and anything can happen to you.”

Since May 28, 2010, when 86 members of the community were massacred in their mosques during Friday prayers in the eastern city of Lahore, attacks on Ahmadis has increased manifold.

Hussain Naqi, a member of the independent Human Rights Commission of Pakistan (HRCP), told IPS that the level of discrimination is becoming even more severe.

“The civil service carries out a full investigation of a person’s religious credentials to sift out those belonging to the Ahmadi community and if an Ahmadi is erroneously inducted in the armed forces, he will never be allowed to rise to a high post,” he said.

Naqi also lamented the irony of the fact that, under the country’s blasphemy laws, “defilement of verses from the Quran is punishable, but not if they are defaced on an Ahmadi mosque by the police.”

He said the chief justice of Pakistan should take this matter into his own hands. “But I know he won’t,” he concluded despairingly.

The latest U.S. State Department International Religious Freedom Report for 2011, made public on Jul. 31, holds Pakistan’s law enforcement personnel responsible for the abuse of religious minorities, especially abuses carried out under the guise of the blasphemy laws.

The report noted the present government’s failure to take “adequate measures to prevent the abuse of discriminatory laws”, in particular the anti-Ahmadi laws.

“Non-governmental organisations (NGOs) have alleged that the anti-Ahmadi sections of the penal code and other government policies fostered intolerance against this community and, together with the lack of police action, created a culture of impunity,” the report stated.

Since the promulgation of anti-Ahmadi laws in 1984, 218 Ahmadis have been killed on religious grounds. Since the beginning of this year, according to Ahmadiyya leaders, seven Ahmadis were murdered in targeted killings.

“There have never been any arrests made,” said Saleemuddin.

To make matters worse, the inquiry commission that was set up to investigate the May 2010 massacre has still not come out with its findings and to this day officials from the commission have failed to contact the Ahmadi community.

But what is even more distressing to the community and human rights defenders is the media’s lack of outrage.

“The media reports atrocities on a daily basis but nobody takes a longer term view as to why this is happening,” Neqvi told IPS.

“The narrative being peddled through mass media is that it is okay to hate some people, like the Ahmadis, but not others (Shias and other moderate Sunnis). That’s really what you call a mixed message.”

Himself a Shia, Neqvi believes the big question of the day is “whether there is any space left for anybody else besides Wahabis and Salafis (Sunnis) in Pakistan”.

Efforts to wipe out Ahmadis’ religious and cultural presence in the country have reached back through the annals of history and are even trying to scrub away memories of Dr. Abdus Salam, Pakistan’s first Nobel Laureate and a member of the Ahmadi community who was celebrated for his role in indentifying the properties of the Higgs boson particle.

It is doubtful that even increased media coverage will bring about any change. In a recent article in the Express Tribune, Neqvi wrote, “Despite the many atrocities in the name of religion that this country has suffered, I cannot remember even one instance where the public, parliament and the media stood united in condemnation for any (significant) length of time.”