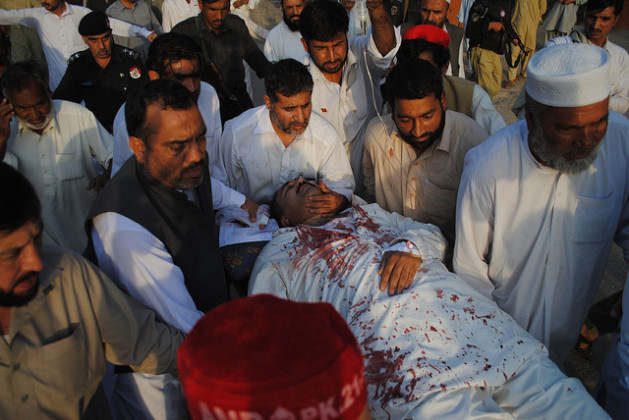 ANP candidate Syed Masoom Shah on his way to the hospital after an Apr. 14 bomb attack in Charsadda, a town in Khyber Pakhtunkhwa province, that injured four people. Credit: Ashfaq Yusufzai/IPS

PESHAWAR, May 10 2013 (IPS) - If you can’t beat them, at least innovate. That seems to be the lesson that Pakistan’s Awami National Party (ANP) has drawn from its predicament.

Exhausted of being at the receiving end of an endless barrage of bomb and suicide attacks by Taliban militants, the party has turned to technology for succour.

It is using the Internet to reach out to the electorate across its various constituencies in the northern Khyber Pakhtunkhwa province, its main support base.

ANP leader Mian Iftikhar Hussain told IPS what a blessing it was to be able to reach the people through Skype ahead of the May 11 elections.

“Through it, we can reach the electorate without putting our lives in danger,” he said. Technology has helped them protect not just their own lives but also those of the people who come to listen to them.

Hussain, a former information minister in Khyber Pakhtunkhwa, lost his only son, Mian Rashid Hussain, in a terror attack by the Tehreek-e-Taliban Pakistan (TTP) in October 2010.

The ANP, which has been in power in Khyber Pakhtunkhwa, one of Pakistan’s four provinces, for the last five years (2008-2013), had earned the wrath of the outlawed TTP due to its firm stand against Islamist militancy.

It has paid a high price. Around 800 of its leaders and workers have fallen prey to attacks by the TTP in the past five years. And the violence has only worsened in the run-up to the elections.

The ANP remained its primary target, but the other liberal parties – such as the Muttahida Qaumi Movement (MQM) and the Pakistan People’s Party – have also been victims of its ire. Bombs and suicide attacks on ANP and MQM candidates and offices became the order of the day.

“It was the ANP (provincial) government which took the most successful military action against militants in the Swat district of Khyber Pakhtunkhwa,” said Muhammad Jamil, who teaches Pakistan Studies at the University Public School in Peshawar. “The TTP had ruled Swat from 2007 to 2009 till it was evicted by the ANP-led government in 2010.”

Swat is also where the brave Malala Yousafzai comes from. The 14-year-old was shot in October last year by the Taliban for championing the cause of girls’ education.

The ANP, Jamil told IPS, was the only party carrying out an “open and brave campaign” against the Taliban, which made it the focus of their violent agenda.

“The TTP is afraid it could face more stern action if the ANP is voted to power again. It is therefore making every attempt to keep the party away from election and to pave the way for parties which have a soft spot for the Taliban,” he added.

It may not quite succeed, given the ANP’s ability to get around obstacles. First, its women leaders took charge where the more prominent candidates could not canvass, going from village to village soliciting women to vote for their candidates and trying to persuade men to do so as well.

Now it has included the internet in its armoury to circumvent the militants and communicate with its supporters.

And people have taken very well to seeing their leaders communicate with them on internet, said ANP leader Bushra Gohar.

“Our workers appreciate the new move because the ANP couldn’t put the lives of workers on the razor’s edge by holding public meetings. Via Skype, we are able to communicate our message to the people in an atmosphere of peace,” she told IPS.

“Many of our candidates have wanted to be present physically in public meetings but could not because of the threat from militants,” she added. “The use of internet has resolved our problem.”

Hussain turned to Skype again in Taro locality, some 15 kilometres from Khyber Pakhtunkhwa capital Peshawar, to spread his own and the party’s message.

Ali Haider, who organised the Skype address, said it was an unqualified success. “We are planning more such meetings where ANP’s leaders and candidates can address the people on Skype. These are very safe,” he said.

“Where there is a will, there is a way,” Sanaullah Khan, a Mardan-based ANP worker, told IPS. “We have been listening eagerly to the speeches being delivered by our leaders via Skype.”

Former Khyber Pakhtunkhwa chief minister and ANP leader Ameer Haider Khan Hoti is contesting the national assembly seat from his hometown. Having survived a suicide attack on Feb. 15, 2013 in Mardan, he, like the others, could not campaign in person for the elections.

People are organising Skype speeches for him as well in Mardan.

Khan said they had also been working on developing the party’s webpage and were posting regular election updates on Facebook.

“The response is unprecedented because a majority of our leaders have also opened Twitter accounts to send their message to the workers,” he said.

Muhammad Namir, a schoolteacher in Mardan, was among those who heard Hoti’s speech on the internet on May 3. The leader, Namir said, recounted the many projects his government had executed in the five years of its rule and asked the people to give their vote to the ANP’s candidates again in this election.

“Party workers say that the use of internet has saved them from attacks,” Namir told IPS. “For public meetings, you have to make arrangements. But for an internet campaign, all that is required is a laptop.”

The ANP has also been using songs to motivate the masses,” said Muhammad Shoaib, a local journalist in Swabi. ANP candidates have survived three terror bids in Swabi, the fourth most populous district in Khyber Pakhtunkhwa.

The party’s election songs have elevated the people’s mood. The ANP put out an album of 11 Pashto songs for the election campaign. Sung by well-known singer Gulzar Alam, the songs reinforce the themes of peace, democracy and progress – the very things the ANP is promising to the electorate.

“The songs are enticing the people because they relate to the protection of Pakhtun soil,” Shoaib said. The Pakhtun population forms a majority in the province of Khyber Pakhtunkhwa.

In an electoral battleground bloodied by the militants, the songs seem to be more than a small comfort.