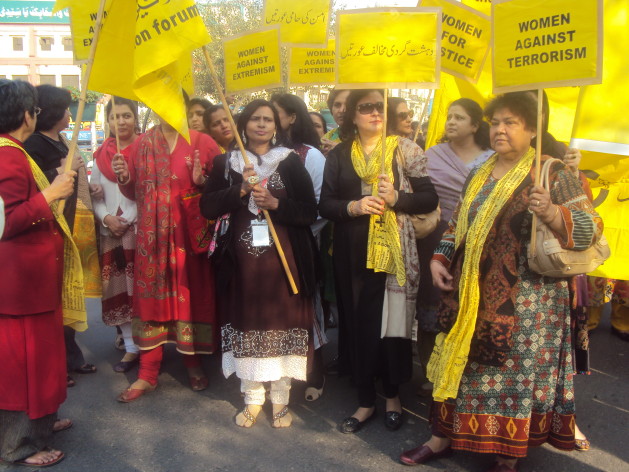 LAHORE, Pakistan, Dec 31 2013 (IPS) - A new policy by the Pakistani government to regulate foreign-funded non-governmental organisations (NGOs) has come in for sharp criticism from the social sector, with many saying it could stifle rights-based groups and affect crucial services provided to the needy.

The government says it wants to ensure transparency in the working of NGOs that receive foreign contributions, but few are willing to buy that line.

Farooq Tariq, general secretary of the Awami Workers Party (AWP), minces no words. He alleges that whenever the Pakistan Muslim League-Nawaz (PML-N) comes to power, it tries to control social organisations through coercive measures.

“Civil society on the whole supports transparency, but it cannot compromise on its freedom and autonomy.”

The PML-N sees rights-based social organisations as irritants and does not tolerate independent criticism, Tariq says, pointing out that in the past one of its ministers had called NGOs foreign agents.

He condemned the government for trying to establish its hegemony over politics as well as the social sector. “They are trying to imitate the way Sri Lanka’s Mahinda Rajapaksa government controls NGOs,” he alleges.

The new policy will be applicable to national NGOs that receive foreign contributions as well as international NGOs. It calls among other things for prior agreements between the government and these NGOs, disclosure of sources of funding, details of proposed projects, areas of work, and details of the geographic location of the projects.

The policy was approved by the economic coordination committee of the federal cabinet last month and will remain in force till the bill, the Regulation of Foreign Contributions Act 2013, becomes law.

Some see it as a move to check spying activities carried out by foreign agencies in the name of social work, especially in the wake of the Shakil Afridi episode.

A doctor by profession, Afridi was allegedly used by the U.S. intelligence agency CIA to run a fake polio vaccination campaign in Abbottabad in 2011 to track down Al-Qaeda chief Osama bin Laden. U.S. forces killed bin Laden the same year.

The allegation that an employee of the global charity, Save the Children, facilitated Afridi’s meeting with the CIA raised suspicion about NGO activities in Pakistan.

PML-N Senator Tariq Azeem, who worked on the draft bill, says there is no ulterior motive behind the regulation of NGOs.

International donors have raised similar concerns, he says. Azeem says USAID has for example asked people to inform it about any corruption complaints regarding its projects.

He thinks there should be no need for NGOs to share too many details if they get their accounts audited by firms of international repute. “Civil society on the whole supports transparency, but it cannot compromise on its freedom and autonomy.”

According to a 2001 United Nations Development Programme publication (the last year for which figures were available), the number of registered NGOs in Pakistan was around 16,000. If unregistered NGOs were to be included, the figure could be around 35,000. Most of them are involved in areas like health, education and poverty reduction.

NGOs play a crucial role in Pakistan, where the unemployment rate is 11.2 percent, 60 percent of the population is poor, the maternal mortality rate is 276 per 100,000 live births and more than 350,000 children die before their fifth birthday. Pakistan ranks 180th out of 221 countries in its literacy rate.

NGOs fear that the new policy will affect their supply of funds in the new year.

The draft bill proposes a maximum limit of 20 percent on the use of foreign funds for administrative purposes, confiscation of funds in case of non-compliance, and a five-year ban on receiving foreign contributions for those convicted twice.

Salman Abid, Punjab head of the human rights organisation Strengthening Participatory Organisation (SPO), fears that the bill once passed can be used to intimidate NGOs.

The proposed law prohibits NGOs from executing projects that harm the sovereignty, integrity and security as well as strategic, scientific and economic interests of the state, he points out. “The question here is who will decide what is against national interest and what is not.”

He thinks the bill should have been introduced after a consultative process that includes all stakeholders, especially NGOs. “Unfortunately they were not consulted.”

Salman Abid believes the state’s concern about spying activities carried out in the garb of development work may be genuine, but says it is not right to rein in the entire social sector under this pretext.

The government should use its security apparatus to identify unwanted personnel instead of making things tough for NGOs, he says.

Many also believe that by asking NGOs to declare the geographic location of their operation, the state wants to keep them out of sensitive areas. Others say there may be a more reasonable explanation for this stipulation.

Quite often different NGOs carry out similar work for the same set of people. The government will be able to guide them where they are most needed, he says.

Abid Suleri thinks the government, which is reeling under a funds crunch, may gain from these measures as many international donors may now want to partner with the state directly to avoid cumbersome procedures.

He hopes the government will also look into the accounts of religious organisations and their militant wings that allegedly receive foreign aid.

But he too feels that such a law could be used to curb a vibrant and dynamic civil society.

NGOs, he says, have fought for restoration of democracy and the judiciary, recovery of missing people, and an end to human rights violations by the state machinery, among other things. “What will happen if the government declares all these activities anti-state?”