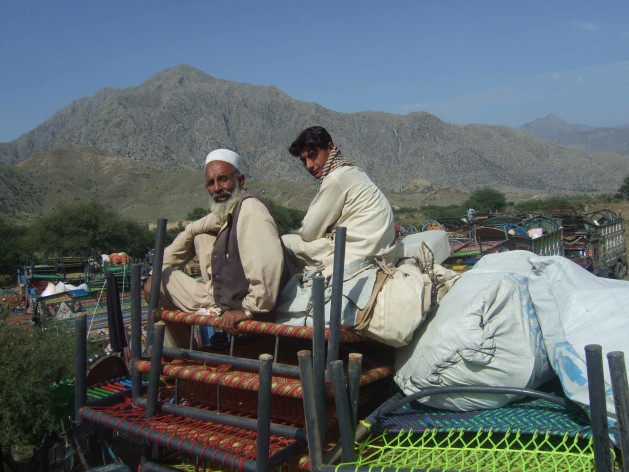 The younger of the Afghan refugees in Pakistan have never known Afghanistan. Credit: Ashfaq Yusufzai/IPS.

PESHAWAR, Pakistan, Nov 10 2013 (IPS) - Seventeen-year-old Usmanullah Shah has never been to Afghanistan, the land of his forefathers. The son of Afghan parents who fled to Pakistan 34 years ago to escape war, he shudders at the thought of going there.

“I was born here and grew up here. I have never seen my native country and I consider myself a ‘citizen’ of Pakistan,” Shah, a Grade 10 student, told IPS.

“We consider Pakistan our second home and don’t want to go back,” he said.

“I was born here and grew up here. I have never seen my native country and I consider myself a ‘citizen' of Pakistan."

There are around 1.6 million registered Afghan refugees in Pakistan, the largest refugee population in the world, according to the office of the United Nations High Commissioner for Refugees (UNHCR).

In July, Pakistan extended the deadline for their repatriation to December 2015 – a decision hailed by people like Shah.

Neither he nor his three younger brothers wants to move out of Peshawar, a border city and the capital of Khyber Pakhtunkhwa province. One of them, Ikramullah Shah, said, “We are extremely happy with Pakistan’s decision to extend our stay here.”

The boy, who studies in Grade 7, said that after 35 years of war Afghanistan was not liveable anymore. “From what we hear, there are no educational, health or civic facilities there. In Pakistan, we are better off.”

That’s a thought shared by many Afghan refugees, especially the younger ones.

Usmanullah Shah said his parents left Kabul when the erstwhile Soviet Union invaded Afghanistan in 1979. That was the time when the Afghan influx into Pakistan began, only to continue, propelled by bloody conflict in that country.

Islamabad has been consistently pushing the UNHCR and the international community to help repatriate the refugees. UNHCR spokesman Qaisar Afridi said 3.8 million Afghan refugees had been repatriated over the past 11 years.

In December 2012, the remaining refugees were given a six-month extension and asked to return by Jun. 30 this year. But again, with the help of the U.N. refugee agency, they were allowed to stay on in Pakistan, Afridi said.

The decision was taken at a meeting in Kabul attended by Afghan, Pakistani and UNHCR officials in July this year. Afghan refugees with Proof of Registration (PoR) cards were legally entitled to stay on, Afridi said.

Abdul Qadir Baloch, Pakistan’s minister for states and frontier regions, said Islamabad had agreed on humanitarian grounds, especially in view of the law and order situation in Afghanistan.

“We aren’t going to force out anyone who has legitimate documents for a temporary stay. The government has been extending hospitality to the Afghans and wants them to go back with dignity,” Baloch told IPS.

He said registered Afghan refugees were entitled to bank accounts, driving licences and connections for telephone, electricity and gas. But the nearly two million illegal refugees would face action from authorities, Baloch said, without elaborating.

Afghans are found in large numbers in cities like Peshawar, Quetta, Karachi and Islamabad. There is also a large population of Afghans residing in Pakistan illegally.

Jamaher Anwari, the Afghan minister for refugees, who had travelled to Islamabad to hammer out the agreement on refugees, told IPS: “Pakistan has hosted our people with open hearts despite its own hardships.”

“The situation in Afghanistan is rapidly returning to normal and we hope all Afghan refugees in Pakistan will proceed to their own country within the specified period,” Anwari said.

But that may be easier said than done.

“The Pakistani government’s decision to extend the deadline for repatriation brought relief for refugees who run businesses or have other interests here and could not have left for Afghanistan immediately,” Muhammad Hashim, a 51-year-old carpet dealer in the Board Area of Peshawar on Jamrud Road that leads to Afghanistan, told IPS.

Hashim, who is originally from Jalalabad, said many Afghans now had homes in Pakistan and Afghanistan and travelled frequently between the two countries. He pointed out that a sprawling market had come to be called “Mini Kabul” as it was completely dominated by Afghan shopkeepers.

Hashim said in Pakistan he lived in an upmarket neighbourhood and his three sons and two daughters were studying in an English-medium school.

“Our younger generation doesn’t want to leave Pakistan for Afghanistan. The situation there offers no hope for young Afghans,” he said.

Life is, however, not always comfortable for refugees.

“Police demand bribes from us,” Muhammad Rafiq, a taxi driver who hails from Kabul, told IPS. “We pay because most Afghan drivers don’t have valid documents,” added the 44-year-old father of two boys, aged 10 and 12.

“The Pakistani government, as well as the people, see us as parasites,” he said. “But my sons don’t want to go back despite the problems here.”

The presence of Afghan refugees is often frowned upon by Pakistanis, who see them as competing with the locals for jobs and housing.

Mian Ziaul Haq, secretary of the Hayatabad Estate Dealers’ Association here, said: “They have caused a shortage of housing not only in Peshawar but in all major Pakistani cities. They are looked down upon by Pakistanis, though house owners are happy with the fat rents they get.”

Despite the resentment they face, many refugees want to stay put.

Muhammad Sadiq, a 23-year-old Afghan who owns a mobile phone shop in Mardan, one of the 25 districts of Khyber Pakhtunkhwa, has never been to Afghanistan and doesn’t intend to go either.

“What is left in a country ruined by three decades of endless war?” he asked.

Sadiq told IPS, “My parents visit their native home in Jalalabad regularly, but I and my brothers never accompany them. We live here comfortably and don’t see any reason to go back.”