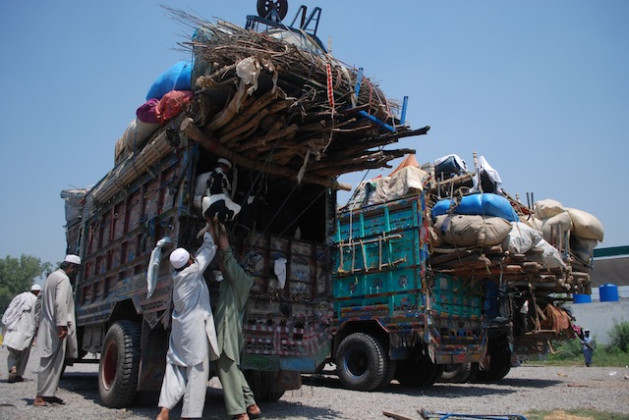 Many refugees return to Afghanistan only to cross back over the border into neighbouring Pakistan a few months later. Credit: Ashfaq Yusufzai/IPS

Born in Afghanistan’s eastern Nangarhar province, he was bundled across the border during the Soviet invasion of his country in 1979 by his family fleeing the chaos of war.

The mountainous terrain of Peshawar, capital of Pakistan’s northern Khyber Pakhtunkhwa (KP) province, is all he knows. Over the past three decades he has built a humble life here, and now sells vegetables in the city centre.

But his world could soon be turned upside down, if the Pakistan government sticks to its Jun. 30 deadline for repatriating some 1.6 million Afghan refugees who have put out roots in Pakistan’s soil.

For years the government has been extending the deadline for allowing undocumented immigrants to remain in the country, but pressure from an increasingly disgruntled local population fed up with sharing limited resources with tens of thousands of refugees is finally winning out.

For Shakoor, going back across the border is simply not an option.

“I have three children who study in a local school,” he told IPS. “Going back means I will be depriving them of an education.”

He also lamented that a lack of basic services like electricity and water, coupled with a dearth of business opportunities and healthcare in Afghanistan, makes the idea of return a bleak one.

“The government will take action against illegal Afghans because they are involved in crimes,” Jahangir Khan, a local police offer in Peshawar, tells IPS.

He claims that last year Afghan refugees were involved in 51 percent of the crimes committed in KP, which hosts a million of the 1.6 million Afghan refugees in Pakistan.

Because they are not registered in the system, they are able to get away with crimes like murder and robbery, he charged. “We are recommending that the government send them back as soon as possible.”

His words echo a Sept. 19, 2012 ruling by Peshawar High Court (PHC) Chief Justice Dost Muhammad Khan that the federal government takes all necessary measures to ensure repatriation of undocumented refugees by Dec. 31 of that year.

Khan cited a declining climate of “law and order” as a result of a huge, unauthorised population living and working throughout Pakistan, and referred to the peace process underway in Afghanistan as further grounds for return.

The chief justice also claimed that “unlawful” Afghan business owners were not paying taxes to the local government.

Though the ruling was eventually overturned by order of the Supreme Court, the PHC directive fanned the flames of intolerance among many locals in Peshawar and prompted KP Chamber of Commerce and Industry President Dr. Yousaf Sarwar to point out that so-called unlawful enterprises are putting a strain on KP’s infrastructure and fragile economy.

Such charges turned a hostile spotlight on small business owners who have so far managed to escape scrutiny.

One such entrepreneur, 57-year-old Muhammad Rafi, is now feeling the heat of those impatient for him to leave.

The cloth merchant says he is willing to return, but claims his two sons, both in their early 20s, cannot fathom abandoning their home and moving to a strange land that they have never set foot in.

“They were both born here and are completing their engineering degrees – they have dreams of eventually working in the UK, or some other European country, but not in Afghanistan,” he told IPS.

Jacques Franquin, head of the United Nations Refugee Agency’s (UNHCR) sub-office in Peshawar, says he and his team are working with the government to grant refugees another extension based on the “principles outlined in the Strategic Solutions for Afghan Refugees (SSAR).”

Formulated at a recent conference in Geneva, the strategy “seeks to encourage voluntary repatriation in the fulfillment of the 1951 Refugee Convention,” Franquin said, which underlines the importance of building financial, human, social, physical, and natural assets to empower refugees, and generating sustainable livelihoods for returnees based on access to social services.

Most times, he added, refugees don’t leave their homes out of choice but out of desperation, in a last bid to survive.

He praised the government of Pakistan and the local population for extending hospitality to the refugees and asylum seekers, and applauded the courage shown by Afghan refugees, who have endured three decades of hardship.

The Refugee Agency has been offering each person a 150-dollar incentive package to return home. This programme has yielded some results, with 83,000 Afghans returning to their country last year and 19,000 departing Pakistan in the first six months of 2013.

But these numbers do not tell the whole story. An inefficient security system along the 2,400-km border between the two countries means that thousands of refugees simply cross back into Pakistan each month, again without valid documents, an official speaking under condition of anonymity told IPS.

Experts believe an unstable political situation in Afghanistan, which is preparing for the 2014 withdrawal of NATO troops and a presidential election that will determine the future of the war-torn country, makes northern Pakistan an inevitable destination of thousands for several months to come.

According to a U.N. report, about nine million people, or roughly 36 percent of the population in Afghanistan, live below the poverty line.

Inflation continues to hover at nine percent and very little progress has been made to facilitate private sector development or investment in infrastructure projects that will boost employment.

“Up to 60 percent of returnees are experiencing difficulties rebuilding their lives,” the report stated. “Large numbers of Afghans continue to migrate to cities inside Afghanistan or to neighbouring countries seeking livelihood opportunities.”

A government official who did not wish to be named told IPS that in light of such harsh ground realities, Pakistan’s newly elected federal government will have no choice but to extend refugees’ stay.