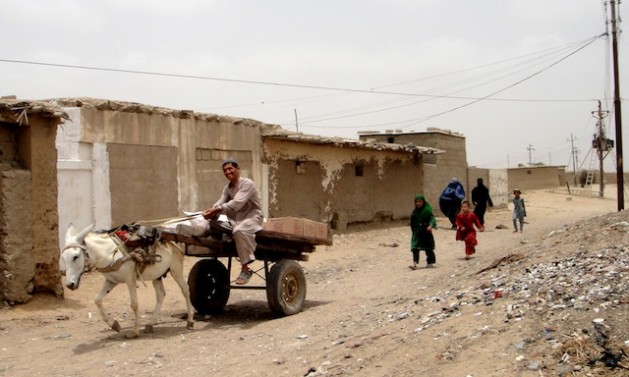 Most Afghan refugees would rather stay on in mud houses in Camp Jadeed in Karachi than return. Credit: Zofeen Ebrahim/IPS.

KARACHI, Aug 3 2012 (IPS) - Pakistan faces increased international pressure to extend the stay of Afghan refugees as it seeks to push them back to war-torn Afghanistan.

The government seems adamant in the face of such pressure. “When their refugee status expires on Dec. 31, they will have to leave,” Habibullah Khan, secretary of the ministry of states and frontier regions tells IPS over phone from Islamabad.

“This is not something that has come out of the blue to have created such a furore; it was a strategy chalked out and approved by the Cabinet.”

Pakistan would have to expel three million Afghans, 1.7 million of them registered, and more than half of these living in camps. The families of most of these refugees, and an estimated 1.3 million unregistered Afghans have been in Pakistan for more than 30 years.

Afghanistan is ill-prepared for such a mass influx.

Given the NATO and ISAF troops drawdown due by 2014, Afghanistan is battling its own set of problems -reining in an insurgency, reviving a collapsed economy and controlling the rising power of the warlords.

Khan has also said Afghan refugees have become a threat to law and order and to social stability.

Haji Abdullah Bukhari, Afghan refugees spokesperson living in one of the biggest refugee camps, Camp Jadeed, in the southern port city of Karachi is incensed: “Our Afghan colonies are more peaceful than all of Karachi. He should give proof before making such baseless and irresponsible statements,” he told IPS.

Bukahri, a well-respected Afghan tribal elder, has been in Pakistan for 30 years and divides his time running an electrical shop and doing social work. He is hopeful there will be an extension, a third. “I’m not saying we won’t go, but at this point in time, Afghanistan is weak and will not be able to take this burden.”

Amanullah Mughal, 36, himself an Afghan refugee, has been transporting refugees to the border for some years now. “I don’t want to go to Afghanistan,” he tells IPS. “It will take me another 30 years to resettle there.”

Just about eight years old when he came here from a village in Kunduz province north of Afghanistan, Mughal now has nine children, all born in Pakistan. They have never set foot on Afghan soil and consider Pakistan their country. Unfortunately Pakistanis don’t see them that way.

And so when their Proof of Registration (PoR) cards expire, they will be deemed illegal if still in Pakistan.

Bilal Agha, senior field assistant with the United Nations refugee agency (UNHCR) told IPS that refoulement is a serious crime. This part of refugee law guarantees protection against sending anyone back to a country they left where their lives or freedoms could be threatened.

“It will not be accepted by any international actor involved with refugees,” Agha told IPS. “The UNHCR has a clear understanding that no one will be forcefully returned if he/she is not willing to repatriate voluntarily.”

Agha added that the UNHCR will seek to ensure safety of Afghan refugees after the expiry of PoR cards. He said the refugee agency will closely track the situation through its partners and with refugee communities.

Some undocumented Afghans, Agha said, are already being put behind bars under the Foreigners Act of 1956. “After completion of their sentence they are deported and handed over to Afghan authorities at the border, in the presence of Afghan consulate representatives from Pakistan.”

Bukhari smiles at the reality behind such moves. “The doors are always open, and people from both sides of the border come and go all the time,” he said. Pakistan has tried to register all Afghans living in Pakistan, but is unable to tap all those entering through its porous border.

Mughal also lives in Camp Jadeed, in Karachi’s administrative district Malir. The camp is in Gadap town where 80 percent of the 70,000 Afghan refugees in Karachi live and are registered.

“Most of the Afghans living there work as daily wage earners. They are in carpet weaving, the leather industry, fisheries or in the recycling business,” Agha Azam, coordinator with the government’s Afghan Refugees Repatriation Cell told IPS. He has been running the Voluntary Repatriation Centre in Gadap Town for more than nine years, and it is his job to register and facilitate the repatriation of Afghan refugees.

“Because repatriation is purely voluntary, we cannot encourage them to go,” he said.

Since the beginning of this year, Azam said the centre had sent some 2,600 Afghans from Karachi up to the Afghan border. Each was given 150 dollars in cash assistance. He said he could not say how many return through the same border.

Refugees point to the homes they have now built over years. “This was barren land back in the 1980s, and we lived in tents. Because there was no habitation, snakes and scorpions often bit our children. It is only recently that we have been able to build mud houses,” said Haji Abdullah Bukhari, pointing to a ramshackle neighbourhood of Camp Jadeed.

Many such refugee settlements lack basic health and education facilities. But despite the terrible conditions, most don’t want to leave for a country that may be theirs but which they barely know.