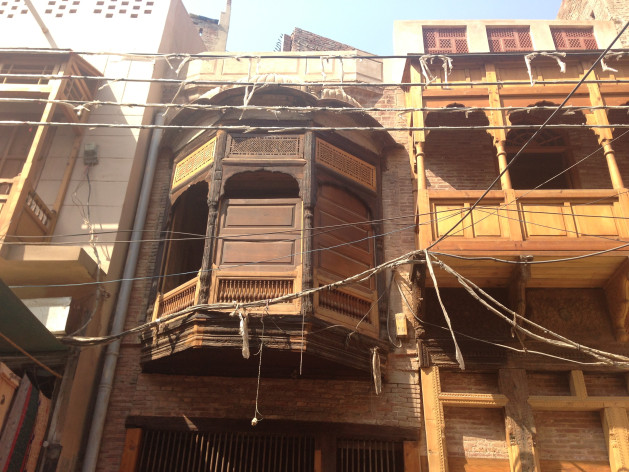 LAHORE, Pakistan, Aug 11 2013 (IPS) - Zahid Husain, 25, is a salesman in the Pakistan city Lahore. He sits idly on the pavement of a clothes shop and plays a game on his cell phone, oblivious to the changes in the city all around him.

The road to the shop is closed to motorised traffic. Structures are being demolished, and there is digging and construction all over the place. The shop, which was busy with customers, is half-closed and unlit. Husain switches the lights on only when someone arrives, to save on electricity.

But business is down in this historic part of the city only because it is being revived. The walled city as it is called because this was once the fortified centre, has been picked for rehabilitation and conservation under a multi-donor programme.

Many local people are not impressed. “I think they have excess funds which they want to spend on this area’s development,” Zahid tells IPS. He is not happy about the loss of customers.

"People badly need this because they are known in the world for all the wrong reasons."

Tariq Ali, 35, from a street near Delhi Gate in Lahore hopes the development will free his locality of encroachments, uncontrolled commercialisation, filth dumps and overflowing drains.

“Above all we will preserve our heritage for ages to come,” he says, admitting he does not quite know what that heritage is.

Such ignorance is exactly what this project aims to address, Kamran Lashari, director-general of the Walled City Lahore Authority (WCLA), the government body executing the project, tells IPS. “It is not just a project. We are going for overall urban regeneration where locals and tourists will have the feeling of going back into time.”

Facades of buildings in bazaars and adjacent streets are being redone, underground sewerage is being laid, electricity poles removed from streets, modern balconies and doors replaced with traditional ones, and streets paved with tiles like those used centuries ago.

There will be the traditional cultural festivals, pigeon-flying contests, wrestling bouts, cuisine, handicraft shops, and displays of the older lifestyle.

The ultimate goal of this ambitious project is to create a sense of pride and collective ownership of national heritage, Lashari says. People badly need this because they are known in the world for all the wrong reasons, he says.

The World Bank and the government of Punjab province have contributed 700 million Pakistani rupees (seven million dollars) each for the first phase of the project, to be completed in November this year. The Agha Khan Trust for Culture (AKTC) is providing technical assistance and consultancy. The trust promotes physical, social, cultural and economic revitalisation of people and places in the Muslim world.

All encroachments around historic monuments are being removed. Squatters were paid compensation at the rate of Rs 10,000 (100 dollars) per square foot to vacate properties.

The walled city is an area of 2.56 square kilometres and is home to historic monuments such as the Badshahi Mosque, the Lahore Fort, the Wazir Khan Mosque and the Shahi Hamam.

The old city has existed for many centuries. It saw a major development during the reign of Mughal emperor Jalaluddin Muhammad Akbar who made Lahore his headquarters in the years 1584 to 1598. “It was he who built and fortified the wall around this settlement,” Aijaz Anwar, conservationist and professor at the National College of Arts in Lahore, tells IPS. “The project will revive the city of Akbar’s era.”

But residents do have reservations and need to be convinced, Rana Muhammad Azam from Qavi Engineers, the company hired to carry out the project tells IPS. Social mobilisers have been deployed to convince people about the importance of the project.

Residents will be given economic stakes in this prospective tourist site, Lashari says. Beyond that, what good it offers to a nation torn apart by terrorism and extremism will become obvious by the year-end, he says.